The Lottery: Fairness in Everyone Life

Plenty of people in today’s timing would agree that every race, gender, and age isn’t rewarded with the same equality that someone else might have in their life. However, fairly speaking the 21st century has had more equality opportunities than back when “The Lottery” has taken place. In Shirley Jackson’s short story, “The Lottery” the differentiation between someone’s personal cognizance and the community personal cognizance of equality in everyone’s lives.

The method that everyone in the village have relied on, to figure out rather or not they will be the unlucky chosen one to be stoned was through a drawing from an old black wooden box (Jackson 265).

Don't use plagiarized sources. Get your custom essay on
“ The Lottery: Fairness in Everyone Life ”
Get custom paper
NEW! smart matching with writer

The equality in someone’s life had been determining and rest upon the intimidating ritual of the drawing. From the youngest to the oldest everyone in the village knew how the game was operated. The fact that everyone participates and understands consciously that its outcome is pure chance gives “The Lottery” “a certain democratic aura” (Kosenko).

There had been, also, a ritual salute, which the official of the lottery had had to use in addressing each person who came up to draw from the box, but this also had changed with time, until now it was felt necessary only for the official to speak to each person approaching. Mr. Summers was very good at all this; in his clean white shirt and blue jeans, with one hand resting carelessly on the black box, he seemed very proper and important as he talked interminably to Mr.

Graves and the Martins. (Jackson 266)

Each pull from the box is to be individually pulled by each of the villagers and has gone on for such a long time in their town, also in other towns around them. In some towns, there were so many people that the lottery took two days and had to be started on June 26th, but in this village, where there were only about three hundred people, the whole lottery took less than two hours, so it could begin at ten o’clock in the morning and still be through in time to allow the villagers to get home for noon dinner. (Jackson 264) The initial justification in partaking in the stonening of someone in the village was due to ritualistic sacrifice in order to secure better crops. When a person in the village would be stoned to death, and the rain will come the rain would provide good crop season. (Beutlich) Though some felt as if this tradition wasn’t fair or had equal rights because anyone could have the marked piece of paper from Men or Women. Everyone participated in “The Lottery” and felt as if everything was played accordingly until it was them who have received the marked up paper then elaborated while ranting or in disbelief that the pulling was unfair or certain things weren’t done fairly. People began to look around to see the Hutchinsons, Bill Hutchinson was standing quiet, staring down at the paper in his hand. Suddenly Tessie Hutchinson shouted to Mr. Summers, “You didn’t give him time enough to take any paper he wanted. I saw you. It wasn’t fair.” (Jackson 269)

The Lottery: Fairness in Everyone Life. (2019, Nov 16). Retrieved from https://studymoose.com/the-lottery-fairness-in-everyone-life-essay 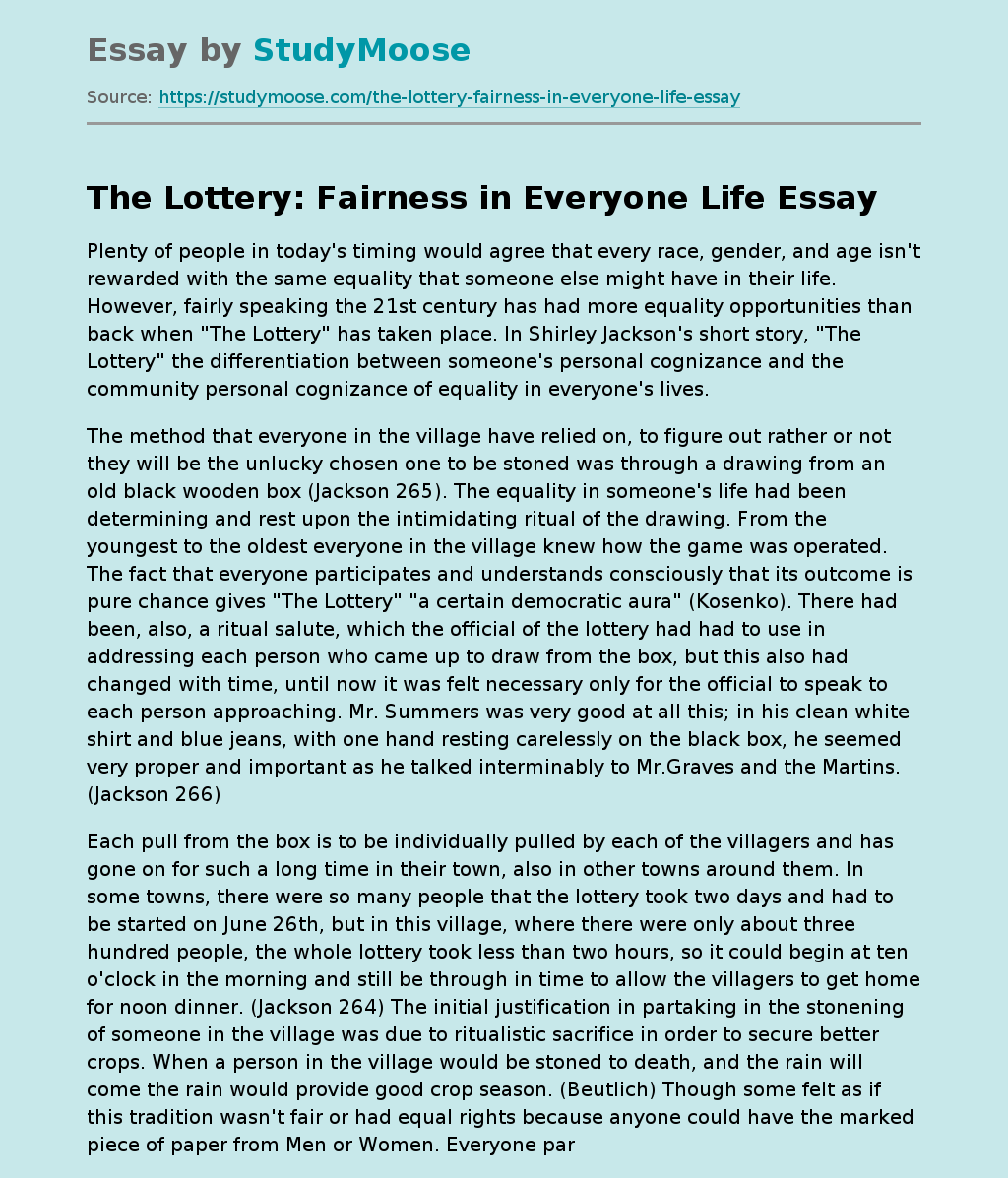