The fictional character “Joker” from the Batman series has a very complex and multidimensional personality and has been studied by hundreds of theorists, philosophers, movie fans, and the like. The Joker has an unpredictable, murderous and psychopathic personality. Some would say sociopathic. While not believed to be insane it is thought by many who have studied the complexities of this character, that the Joker displays some sort of super sanity instead. The fictional Joker was originally known as Red Hood.

While being chased by Batman, Red Hood fell into a batch of chemicals and when he emerged his skin as white, his hair green and the chemicals had forced a smile to remain on his face at all times, looking like the smile of a lunatic.

Don’t waste time
Get a verified writer to help you with The Joker and His Personality in Terms of the Theories of Albert Adler and Abraham Maslow
Hire verified writer
$35.80 for a 2-page paper

He failed at being a comedian while his wife was expecting their first child, and then he got hooked up with some thieves in a scam to steal money from the plant where he used to work.

While he was with the thieves discussing the plan to rob the plant, e learns his pregnant wife was just killed in a freak accident. Then it is believed he tries to back out of the plot to rob the plant, but the two men force him participate and won’t let him leave.

He puts on a red mask to hide his identity. What ensues is a mess involving him and his first encounter with Batman, who is trying to stop the thieves from robbing the plant and he falls into chemicals and emerges as the Joker. What would universally known and respected medical and psychological greats such as Abraham Maslow and Albert Adler have to say about Joker’s personality?

Based off of Maslow’s hierarchy of needs, it could be assumed that Maslow would say the Joker is driven by self-actualization, safety, and physiological needs on the hierarchy. Based on his past experiences Joker’s personality would have evolved to such that he was driven mainly by self-actualization. Joker was clearly a sociopath however looking at what he had been through main explain that notion. However, being a sociopath would also justify that he was not driven by love or belonging. Joker’s behaviors confirm he was not concerned with friendship or family. The other hierarchy step f Maslow’s pyramid that Joker was not driven by was Esteem.

Never has Joker’s character displayed behavior that he was concerned about self-esteem, confidence, achievement, respect of others or respect for others. Joker was driven primarily by the need to breathe, live, excrete and secure his place in the world, secure his body, his employment as a villain, his resources and property. Joker had no social needs; he did not need friendship, intimacy or a support system. Joker had no need to feel accepted or that he belonged. These are all emotionally-based relationships which further strengthen the theory that Joker was sociopath as he did not have any emotional needs.

Albert Adler would explain and describe Joker’s personality not by what motivated and drove the Joker, but by the fact that Joker felt completely superior to others, was egocentric, power-hungry and extremely aggressive. Albert Adler’s theories determined ego-centric and power-hungry people may use humor and paradoxical inunctions for therapeutic tools. And, while no one would admit the Joker needed therapy, he most definitely utilized comedy to his advantage and his humor and paradoxical injunctions gave him that much more power and fear over other characters in the series.

Another Adler theory that may come into play here with the Joker’s personality would be that of an inferiority complex. Many would argue that the Joker had no inferiority issues however Alder’s notion of the inferiority complex may have some basis here. His face, body, skin and hair were completely fried in a chemical burn and he has no one in his life. These are a few reasons that it is possible the Joker suffered from Adler’s inferiority complex. Just as likely as that would be the possibility of the Joker having a complete emphasis on power and knowing that due to everyone fearing him, he also had much power over people.

The Joker and His Personality in Terms of the Theories of Albert Adler and Abraham Maslow. (2016, Oct 17). Retrieved from http://studymoose.com/the-joker-and-his-personality-in-terms-of-the-theories-of-albert-adler-and-abraham-maslow-essay 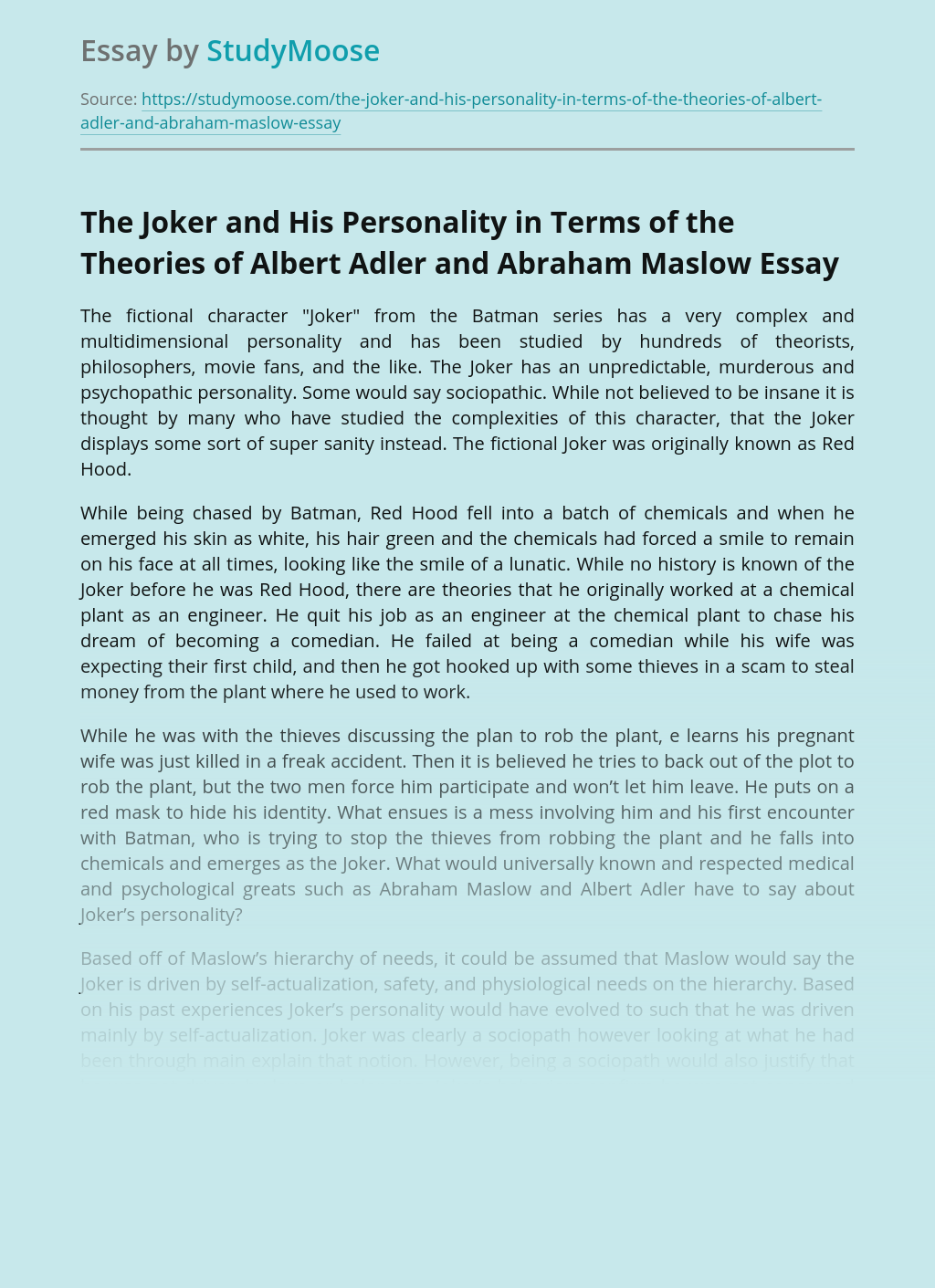 Don’t waste time
Get a verified writer to help you with The Joker and His Personality in Terms of the Theories of Albert Adler and Abraham Maslow
Hire verified writer
$35.80 for a 2-page paper
Stay Safe, Stay Original