The Executive Branch by the President

The executive branch is headed by the President, who is elected by a direct vote of the people. The term of office of the President, as well as the Vice-President, is six (6) years. As head of the Executive Department, the President is the Chief Executive. He represents the government as a whole and sees to it that all laws are enforced by the officials and employees of his department. He has control over the executive department, bureaus and offices. This means that he has the authority to assume directly the functions of the executive department, bureau and office or interfere with the discretion of its officials.

Don't use plagiarized sources. Get your custom essay on
“ The Executive Branch by the President ”
Get custom paper
NEW! smart matching with writer

Corollary to the power of control, the President also has the duty of supervising the enforcement of laws for the maintenance of general peace and public order.

Thus, he is granted administrative power over bureaus and offices under his control to enable him to discharge his duties effectively. The President exercises general supervision over all local government units and is also the Commander-in-Chief of the Armed Forces of the Philippines.

Under the existing Presidential form of government, the executive and legislative branches are entirely separate, subject only to the mechanisms of checks and balances. There were attempts to amend the Constitution in order to shift to a parliamentary system, but these moves were struck down by the Supreme Court. The most recent petition that reached the Supreme Court is Lambino vs. COMELEC. The Legislative Branch

The legislative branch, which has the authority to make, alter or repeal laws (see also the definition of “legislative power“), is the Congress.

Under a bicameral system, the Congress is composed of the Senate and the House of Representatives. The Senate is composed of twenty-four (24) Senators, who are elected at large by the qualified voters of the Philippines. The term of office of the Senators is six (6) years. The House of Representatives, on the other hand, is composed of not more than two hundred and fifty (250) members, unless otherwise fixed by law, who are elected from legislative districts apportioned among the provinces, cities and the Metropolitan Manila area, and those who are elected through a party-list system of registered national, regional and sectoral parties or organizations. The term of office of members of the House of Representatives, also called “Congressmen,” is three (3) years.

Judicial power is vested in the Supreme Court and in such lower courts as may be established by law. The judiciary has the â€œmoderating powerâ€? to â€œdetermine the proper allocation of powersâ€? between the branches of government. When the “judiciary mediates to allocate constitutional boundaries, it does not assert any superiority over the other departments; it does not in reality nullify or invalidate an act of the legislature, but only asserts the solemn and sacred obligation assigned to it by the Constitution to determine conflicting claims of authority under the Constitution and to establish for the parties in an actual controversy the rights which that instrument secures and guarantees to them.” In the words of Chief Justice Reynato S. Puno: â€œThe Judiciary may not have the power of the sword, may not have the power of the purse, but it has the power to interpret the Constitution, and the unerring lessons of history tell us that rightly wielded, that power can make a difference for good.â€?

While Congress has the power to define, prescribe and apportion the jurisdiction of the various courts, Congress cannot deprive the Supreme Court of its jurisdiction provided in the Constitution. No law shall also be passed reorganizing the judiciary when it undermines the security of tenure of its members. The Supreme Court also has administrative supervision over all courts and the personnel thereof, having the power to discipline or dismiss judges of lower courts. The Supreme Court is composed of a Chief Justice and fourteen Associate Justices. It may sit en banc or, in its discretion, in divisions of three, five or seven members.

A member of the Supreme Court must be a natural-born citizen of the Philippines, at least forty (40) years of age and must have been for fifteen (15) years or more a judge of a lower court or engaged in the pratice of law in the Philippines. Justices hold office during good behavior until they reach the age of seventy (70) years or become incapacitated to discharge the duties of their office. * Sources: Francisco, Jr. vs. House of Representatives, G.R. No. 160261, 10 November 2003, main decision and the separate opinions of Justices Vitug and Corona; Ople vs. Torres, G.R. No. 127685, 23 July 1998.

The Executive Branch by the President. (2016, Nov 05). Retrieved from http://studymoose.com/the-executive-branch-by-the-president-essay 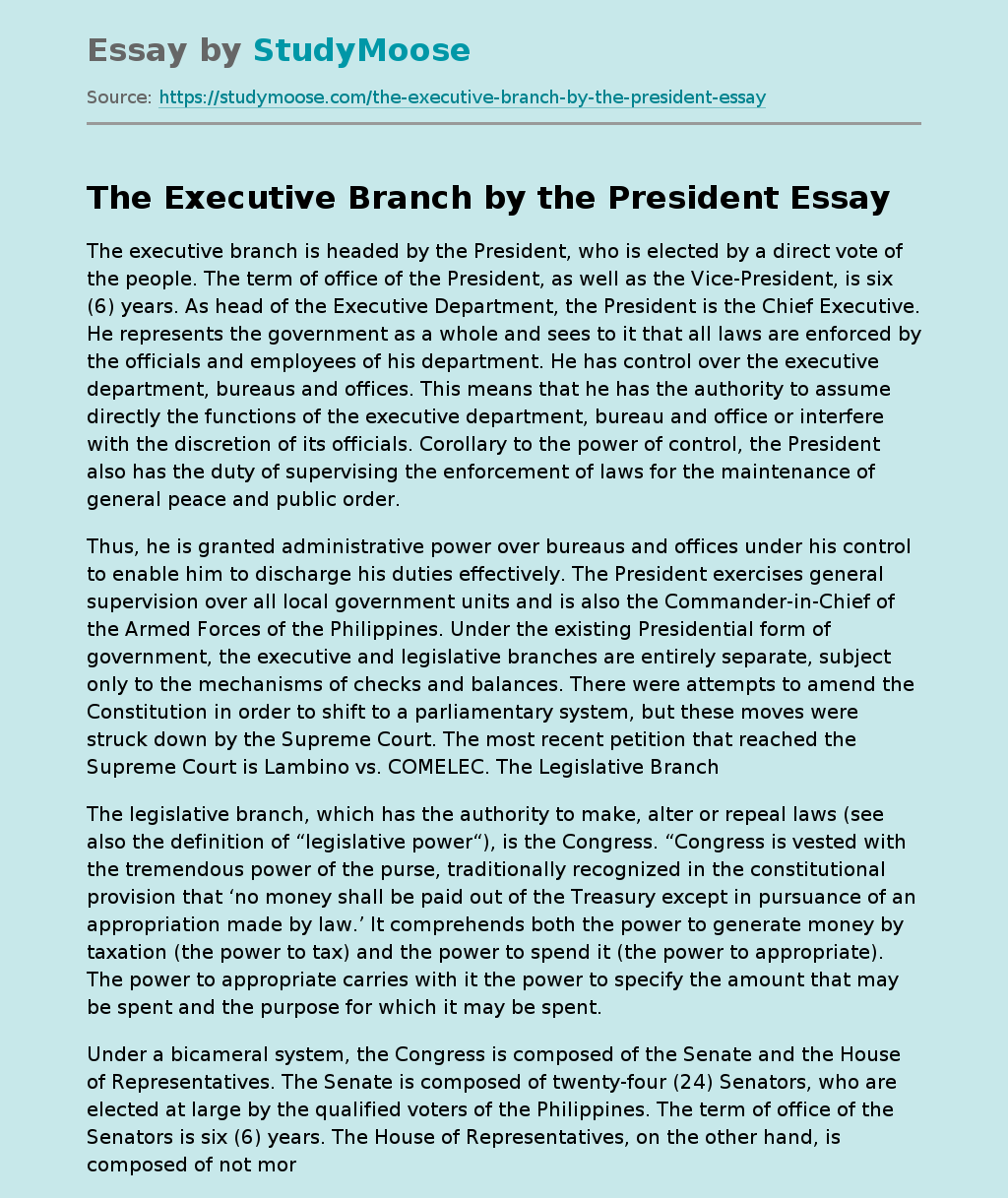