Summery for Mine Boy Essay

And this serves as my summary of the novel Mine Boy, a story about love and race published two years before the official implementation of apartheid in South Africa in 1948, but which highlights the racial discrimination and prejudices that existed in South African society at the time. We follow Xuma, who has migrated from his village in the North to Johannesburg in search of a job in the mines, as he goes through one heartbreak after another. The book opens with his entry into Johannesburg where he was spotted and taken into the residence of the benevolent Leah, at Malay Camp, one of several sprawling black only quarters devoid of social amenities.

Don't use plagiarized sources.
Get Your Custom Essay on Summery for Mine Boy Just from $13,9/Page

This gesture is common in most African societies, where people are obliged, by tradition, to help one another, especially those who have travelled from afar, known and unknown.

After Leah got to know the purpose of Xuma’s migration he offered him a job which he declined, subtly, opting for a job in the mines because ‘it is a man’s work’ even after he had been informed that the miners ‘cough and then spit blood and become weak and die’.

Leah was a Skokiaan Queen dealing in locally-brewed beer, a product that has been banned, of which a culprit could serve a jail term if arrested. Abrahams used something as simple as beer to show how deeply divided the society was at the time.

For as we read later when Xuma has become aware of the ‘ways of the city’, he questioned Why is it wrong if Leah sells beer and right if a white person sells beer? (Page 168) In spite of this, Leah provided for Xuma until he got a job at the mines as a Boss Boy for Paddy (or the Red One), after he was introduced by Johannes, Lena’s ‘man’ who is ‘loud and boastful and arrogant and told the world that he was J. P. Williamson and he would crush any sonofabitch’ when drunk and the one who is ‘quiet and retiring and soft spoken … Gentle as a lamb and seemingly ashamed of his great size and strength’ when sober. Johannes introduction as a character and his behaviour is very metaphorical. It’s almost parallel to the workings of the read Johannesburg society, not finding itself, drawn by two opposing ideologies: blacks are humans vs blacks are not.

At the residence of Leah, at Malay Camp, are Maisy – the sprightly lady who made Xuma laughed even when he doesn’t want to; Eliza – who love the things of the whites; Daddy – the always-drunk man who was once a respected and wealthy man, took Leah into his residence and catered for her until he began to assert his rights and mobilise people to do same; Lena who had educated children but worked with Leah; and Ma Plank a worker at Leah’s place. Xuma fell in love with Eliza but Eliza is enigmatic. She wants the things she knows she could not have.

She wants the things of the white man and this made her unhappy and this unhappiness fed into her relationship with Xuma, loving him and ‘unloving’ him at the same time. So that sometimes she would willingly decide to be with him only to leave a few seconds later. The ‘madness of the city, that had affected her mood caused it to swing from one extreme to the other stochastically. But Maisy also loved Xuma and made him smile. The psychological dilemma, the torment of wanting and not having, or needing and knowing no matter how hard you work at it you simply would not achieve it plays out well. However, it could also be a mentally embedded ideology deeply seated in the minds of the natives for there were blacks who had what the white men had.

Just when Xuma thought all was well with him, after Eliza had asked him to take her as ‘his woman’, things began to fall apart. First Daddy died after he was knocked down by a car, then Eliza ‘went on a long train journey’ from which ‘she will not return’. Then, Leah who had been bribing some policemen for information on their activities, was trapped and arrested. Thus, once the major tree was cut the birds had to leave and so all the people at Leah’s residence left. Xuma became devastated at the arrest and jail of Leah to the detriment of his work at the mine. Paddy having noticed Xuma’s desolation attempted to imbibe some activism into him.

However, this activism was to rear its head when Johannes and his white master, Christian, died underground in the mines. Xuma and Paddy led a demonstration against the mine manager, requesting that the problem be solved before they go in and work. The police were called in to effect the arrest of the striking miners. One by one the lights of Malay Camp were turned out. One by one Vrededorp and the other dark places of Johannesburg, of South Africa, were turned out. The streets were empty. The leaning, tired houses were quiet. Only shadows moved everywhere. Only the quiet hum of the night hung over the city. Over Vrededorp. Over Malay Camp.

Regarded as the first modern novel of Black South Africa, the novel is told from the point of view of Xuma, his travails become ours and his heartbreaks too. By using the simple and everyday life of Black South Africans, Abrahams showed us how racism (or apartheid) had become endemic in South African society so that from birth to deaths one is discriminated against. It is believed that this was one of the first books to expose universally the condition of black South Africans under a white regime. And yet the author never exhibited hatred in his narration for there were likable whites as well as detestable blacks. He propounded the ‘man first’ ideology, as explained by Paddy to Xuma.

Summery for Mine Boy. (2016, Mar 30). Retrieved from https://studymoose.com/summery-for-mine-boy-essay 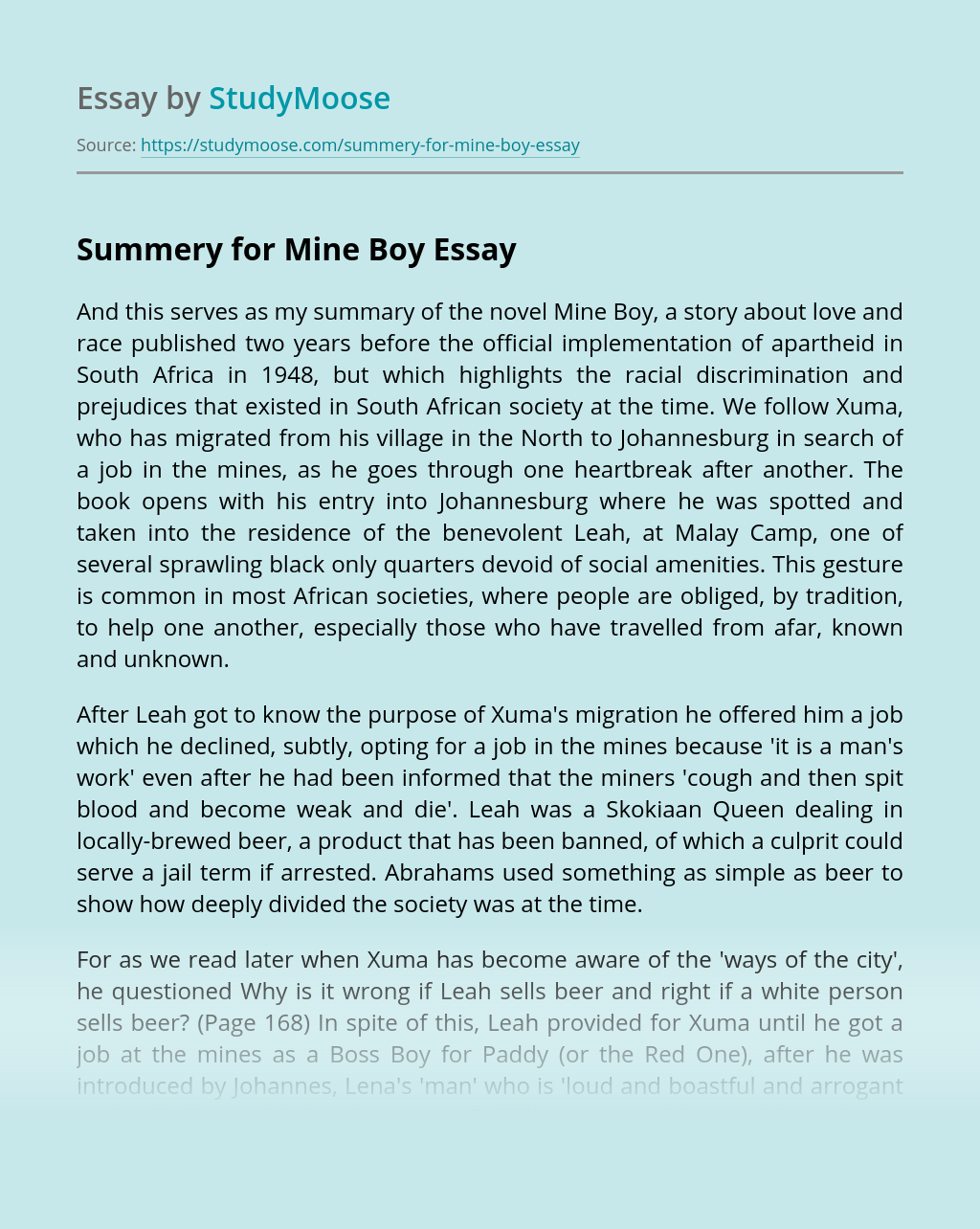