Speech Mechanism Or Production of speech

They are moved so the air is drawn into and pushed out.

Don't use plagiarized sources. Get your custom essay on
“ Speech Mechanism Or Production of speech ”
Get custom paper
NEW! smart matching with writer

The organs of speech Mechanism:-

For the production of speech sounds, we need an air-stream mechanism and that most sounds of most language in the world are produced with a pulmonic egressive air-stream mechanism. The air that we breathe out comes out of the langs. Before it gets out into the outer atmosphere, various organs in our body convert it into speech sounds. These organs are called the organ of speech mechanism. The organs of speech can be divided into the following three group.

The respiratory system:-
The respiratory system consists of the lungs, the muscles of the chest and the windpipe (trachea). The lungs are spongy bodies. They are made up small sacs called alveoli. Air is supplied to alveoli by small tubes called the bronchioles. It is through the trachea or windpipe that the air we breathe in passes through the throat into the lungs. The act that is known as respiratory involves two processes. Inspiration-Taking outer air into lungs.

Expiration-Throwing out air from the lungs into the outer atmosphere. The lungs serve as a source of air and the source of energy for
production of speech is generally the air stream coming out of lungs.

The Phonetary system consists of larynx. The larynx is the little box that is called the ‘Adam’s apple’, situated at the top of the windpipe. The air from the lungs comes out through the windpipe and the larynx. In the larynx, there are situated a pair of like structure called vocal cords and these are placed horizontally from front to back. They are attached in front and can be separated to the back. The opening between the cords is called the glottis is called the glottis. The vocal cards can be opened and closed. The vibration of vocal cords is very significant in speech. When they are kept loosely together, they vibrate and that the vibration produces a musical not called voice. The rate of vibration is called frequency of vibration. This decides the pitch of the voice which helps to create the intonation of a language.

The articulatory system consists of the roof the mouth, the tongue, the teeth, the lips.

Speech Mechanism Or Production of speech. (2016, May 26). Retrieved from https://studymoose.com/speech-mechanism-or-production-of-speech-essay 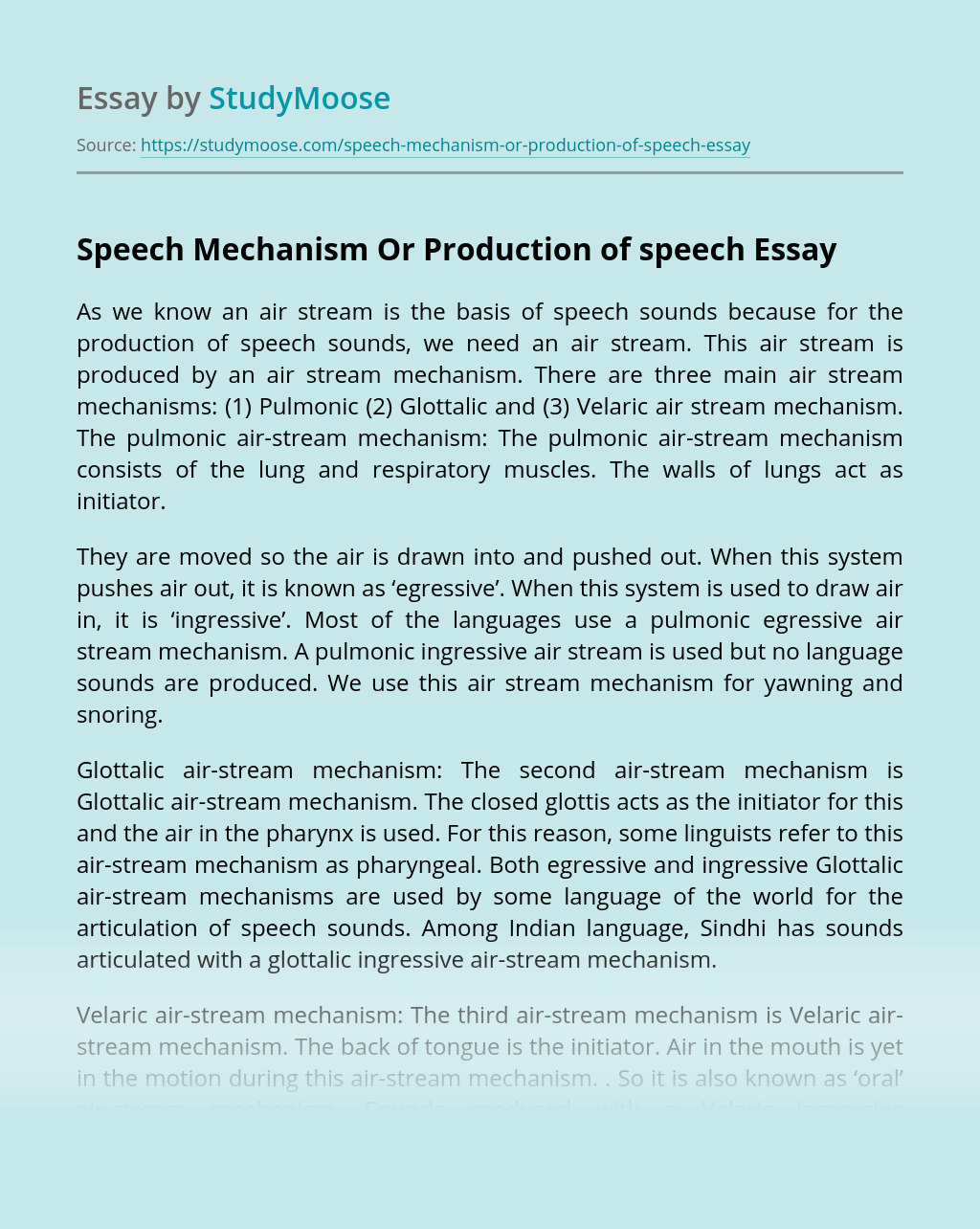