Song of Solomon by Toni Morrison

Song of Solomon is written by Toni Morrison who is the first black woman to have won a Nobel prize in 1993 for literature. Who was raised in a house that was familiar with keeping them selves entertained through listening to stories and then having to add to them. Song of Solomon is Morrisons third novel and was contrived by being challenged to push herself even harder when creating literary novels. This book has more characters and is considered to take the characters on longer journeys.

Don't use plagiarized sources. Get your custom essay on
“ Song of Solomon by Toni Morrison ”
Get custom paper
NEW! smart matching with writer

Milkman is the character that embarks on a journey from an inner disconnect and being dissatisfied with his external circumstances to digging up his true self and getting wise to his culture. Milkman in his endeavor learned more about who he is by getting out and discovering the world around him.

The beginning of the book describes Milkman as irresponsible and somewhat of a wino he spends time drinking booze and dodging responsibility. Delicious as the day turned out to be for Milkman, it was even more so because it included secrecy and defiance.

Both of which dissipated within an hour of his fathers return. (Morrison pg. 49) Which brings me to a character that helped shape Milkman into the guy he was and that would be his father. His father is bitter and has little to no regard for woman or poor Africans. Macon was mostly interested in his finances and himself which left him little time for Milkman other than delegating errands. Milkman grew up in a community where there was a lot of white people and this led him to being picked on and bullied as a black.

This led to Milkman’s character being lost and immature with no regard for his future or no true knowledge of his past. Milkman was instructed to go to work after school and invest in his father’s future. Another interesting fact is that Milkman grew up watching his mother get abused and having her needs be dismissed by his father. The girls serve Milkman in the house hold which leads me to believe that Milkman learned this poor behavior towards woman from his father.

There is a part of the book that would spark Milkman curiosity and led him to spend more time with his aunt Pilate here he is 13 and here he meets the character of Hagar, where he begins somewhat of a dynamic. At this point Milkman is caught at Pilate and Macon calls her a snake and speaks ill of her but does not tell Milkman why she is a snake. Milkman was picking up rents and even more opportunities to drink and spend time with his friend Guitar who was the exact opposite of Milkman but did introduce him to his aunt. Even after being caught by his father drinking and then the intimate conversation Milkman found himself picking up behaviors that would, at first glance take him even future away from who he is. Contrary to what his father hoped, there was more time to visit the wine house. (Morrison Pg 57).

The story goes on and Milkman finds himself trying to leave the grip of his father, he is 30 and he is quite pathetic not having his own purpose and asking for his fathers blessing to leave at this age. His father does what he does best and tries to guilt Milkman into abandoning himself and serving his father. Here on page 163 we find Milkman gaining a sense of confidence when he tells his father the following “I’m not leaving the country; I just want to be on my own. Get a job, live on my own. You did it at 16 Guitar at 17”. (Morrison 163) Milkman is 30 years old when he has this conversation which is a testament to character of milkman who does not allow the reader to capture what he cares about. He has been blind to those things himself. The storyline brings this Milkman to places he could have never imagined. For instance, the Bobcat hunting where he is invited by Omar and who is only a spectator to Milkman at first then becomes an instrument that helps him discover some of his worth. “It took Milkman a while to figure out how to pick up his feet and miss the roots and stones; to distinguish a tree from a shadow; to keep his head down and away from the branches that swept back from Calvin’s into his face” (Morrison 273) This passage clearly shows how much he was neglected during his upbringing he is 30 years old and has no life experience. He has truly been damaged in the pursuing his fathers’ dreams.

Even the smallest of obstacles like realizing that your unable to navigate the woods at age 30 helped Milkman become a man and even learn to relate to himself and the newly discovered world around him.

Song of Solomon by Toni Morrison. (2019, Nov 20). Retrieved from https://studymoose.com/song-of-solomon-by-toni-morrison-essay 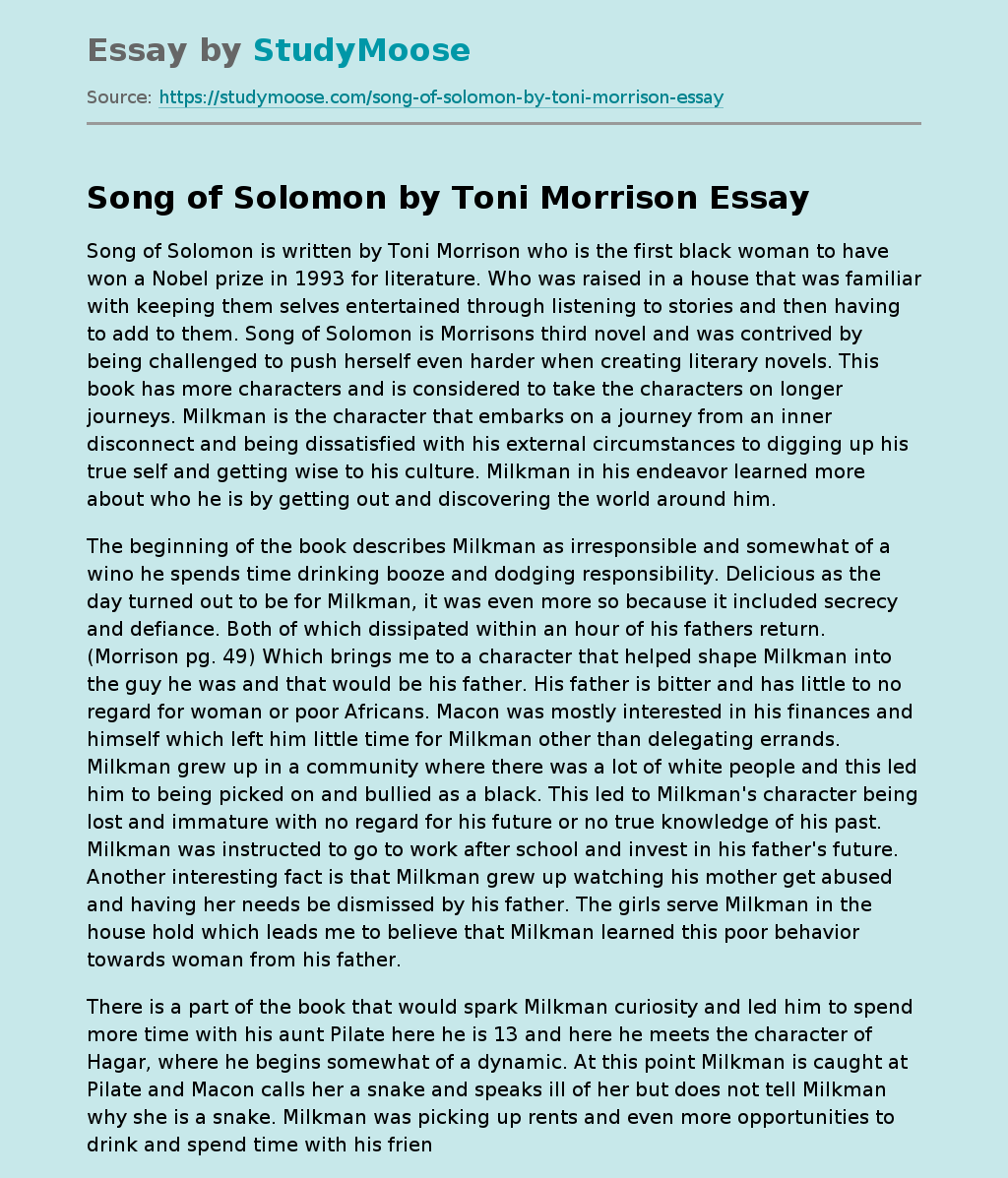