The novelist gives a moving account of the plight of women raped outside marriage, who would rather suffer in silence than be exposed to the humiliation involved in publicizing the event and that of married woman whose bodies are violated by their legally wedded husbands but who would never dare reveal this to anyone. They would rather stifle their voice of protest for the sake of social and moral security.

Deshpande, through the voice of Urmi, also offers us a glimpse into the lives of myriad other women, who are ostensibly more liberated than their predecessors but, who, nevertheless, are victims of some form of violence or deprivation.

Don't use plagiarized sources. Get your custom essay on
“ Shashi Deshpande: A Critical Spectrum ”
Get custom paper
NEW! smart matching with writer

Fluctuations of the emotions in the protagonist Urmila, despite her courage to face life with all oddities, add emotional distress in her life. The unknown fear inside her of losing Kishore keeps her confidence at bay. Women’s lack of rights over her body in the wedlock adds misery to women. Indian society unlike western societies expects women to deliver child within few years of marriage if not she is stigmatized.

Further, they were socialized about the joy and benefits of motherhood.

The novelist documents the Mira’s pathetic status “He forced himself on her inspite of it; it is out of that Kishore was born” (1). The predicament of women is not only psychological by societal. Society fails to give a keeping hand to document women problem and close the issue in different format. The agonies of women are partly due to the hybridization of culture.

This is a postcolonial condition where the characters adopt a culture which is characterized by a mixedness of the western and eastern cultures. It is evident in the character of Urmila who wants to lead an individualistic life, never depended on Kishore economically and at the same time longs for him.

Hybridity of culture destabilizes the dominance of particular culture but at the same time creates a dilemma between the citizens of the culture especially in the postcolonial states. Kalpana who wants to lead an independent life in the postcolonial culture characterized by hybridity ends in despair. Dr. Bhaskar is also influenced by cultural hybridity unable to take decision for his marriage because of the influence of their mother’s traditional outlook and Urmi’s boldness in choosing their life partners.

The protagonist of the novel Urmi is an educated women longs to live up to his own image created by her. The understanding of life according to Urmi is that she is responsible for her own life and she hates the image imposed by others. She proclaims that “it’s been a constant struggle against an image of myself imposed upon me by Vanaa” (1).The trauma in the life of the protagonist is caused by nature. She is frustrated by the death of her infant daughter Anu and she is not able to come out that tragic event. She had her own expectation in life about her daughter despite occasional visits of her husband Kishore to home from ship. The death causes loneliness and she feels trapped by the natural phenomena of life.

The emotional distress of Urmi would have been minimized if she had been associated herself in mother – in- laws home. Urmi is a woman who wants to live an independent life. Indian society has its own merits of showering care and sharing of burden especially in traditional family structure. Urmi missed the opportunity to access their emotional healing resource in her life which is the main cause of her trauma. J.R. Tripathi opines that “the mother’s emotional distress is relieved by communal sharing and affections and rises above the European concept of existential emotional distress which is isolationistic and individualistic and hence depressing and deadly” (2).

Women life is depended on the social image. Indian society has a biased outlook on women. The society accepts the errors of the male but always suspicious with the female. Shakutai, the mother of Kalpana, fears for the social image and fails to disclose the reality of her daughter who is raped by Prabakar. Her position and personal image in the society is more important than the pain of her daughter. She refuses when Urmi endeavors to bring justice to Kalpana by bringing the predator to the court.

The predicament of women in Shashi Despande novels is due to the fact of suppressed emotion within themselves that result in more deceitful condition. She even insists Urmi to recommend to the physician to hide the reality and give false report about the incident. The entire attempt made by Shakutai about the incident does not mean she loves her daughter but she wants to save the image of Kalpana’s sister to be married in a decent family. Burdened by the social image and responsibility to marry her daughter the distress of Shakutai intensifies. Honour is more important than life in the traditional society. The girls are victims in the society.

Shakutai understands that neither the society nor the police will help her to bring about a resolution to her daughter’s problem. The memories play a major role in human lives to break or mold their life. Urmi attempts to divert her problem by attending another person problem with a humanistic attitude but she often struck with the memories of her deceased infant Anu. Marriage is a bond between two individuals to foster love, care and sustenance becomes a trap for women and imprisons them. The character of Mira, mother-in-law of Urmi, suffers from their imprisonment silently and dies during the child birth. The predicament of Mira is due to irresponsibility of her parents and their adherence to existing traditional norms of child marriage at that time. The word love that is synonyms with marriage is hated by Mira because she becomes a victim of rape within marriage.

One of the predicaments of Indian women is the identity crisis that occurs at the time of marriage. Similar to other heroines of Shashi Despande novels like Jaya in The Long Silence, Mira too undergoes a change in her name from Mira to Nirmala which she cannot accept. She feels that she is insecure by the new identity which results in emotional distress which further escalates when her husband shows interest only in her body by forsaking her real emotion through care and consideration. The novelist opines that “she refuses to give up her name and identity and proclaims “I am Mira” (1).

The conflicts of Mira are not only external but also internal. She hates the touch of her husband which gives her a constant trouble. In the name of ‘Love’, her husband indulges in rape within marriage and she is conceived. Mira has an unconscious drive that the baby to be a boy or not to be. The dilemma makes her to suffer inspite of her awareness of the forthcoming joy after the child birth. The novelist documents her desire in this way I feel the quickening in my womb, he moves – why do I call the child he?” (1) Mira suffers from physical as well as from psychological conflicts coupled with her mother’s lack of concern for Mira.

Aspirations for human beings are endless. Female who had subjected to long years of interdependence feels elated when they become independent? Shakutai makes her daughter to be an aspiring girl who gets education and leads a duty free life which is contrary with Mira’s mother. But independence in women life ended in disruption of her entire life. She has been brutally raped by Prabakar. She is so fearful that Kalpana’s sister will not get married if their incident is known to the public. It is inferred that the men create problems to augment their distress by the rape and consensual rape within marriage, but sometime like Kalpana’s mother, women tend to be the problem makers by denying truth and maintain silence either for their own or family gain. Altogether, the women suffer the most.

Urmi predicament is not economical because her husband is working as a navy officer but it is psychological in nature. The occasional visits of Kishore and her parting lift Urmi in a devastated position as she equals it to death. Her interdependence on Kishore emotionally is a trap for Urmi. Kishore contributes his past to argument her suffering by his indifference attitude towards Urmi. Urmi has rights over her body but the female sexual needs in the absence of Kishore make her miserable.

The author documents the bond of marriage is meaningful only the husband and wife are near and dear to each other in spite of economical and societal challenges. Urmi suffering is due to the death of her daughter Anu along with the shattered dream for her daughter. The death of Anu marks the death of her dream towards her loving daughter. The shattered emotions causes much more pain to the protagonist Urmi. She says: “we dream – much more for our daughter than we do for our sons, we want to give them the world we dreamt of for ourselves (1). 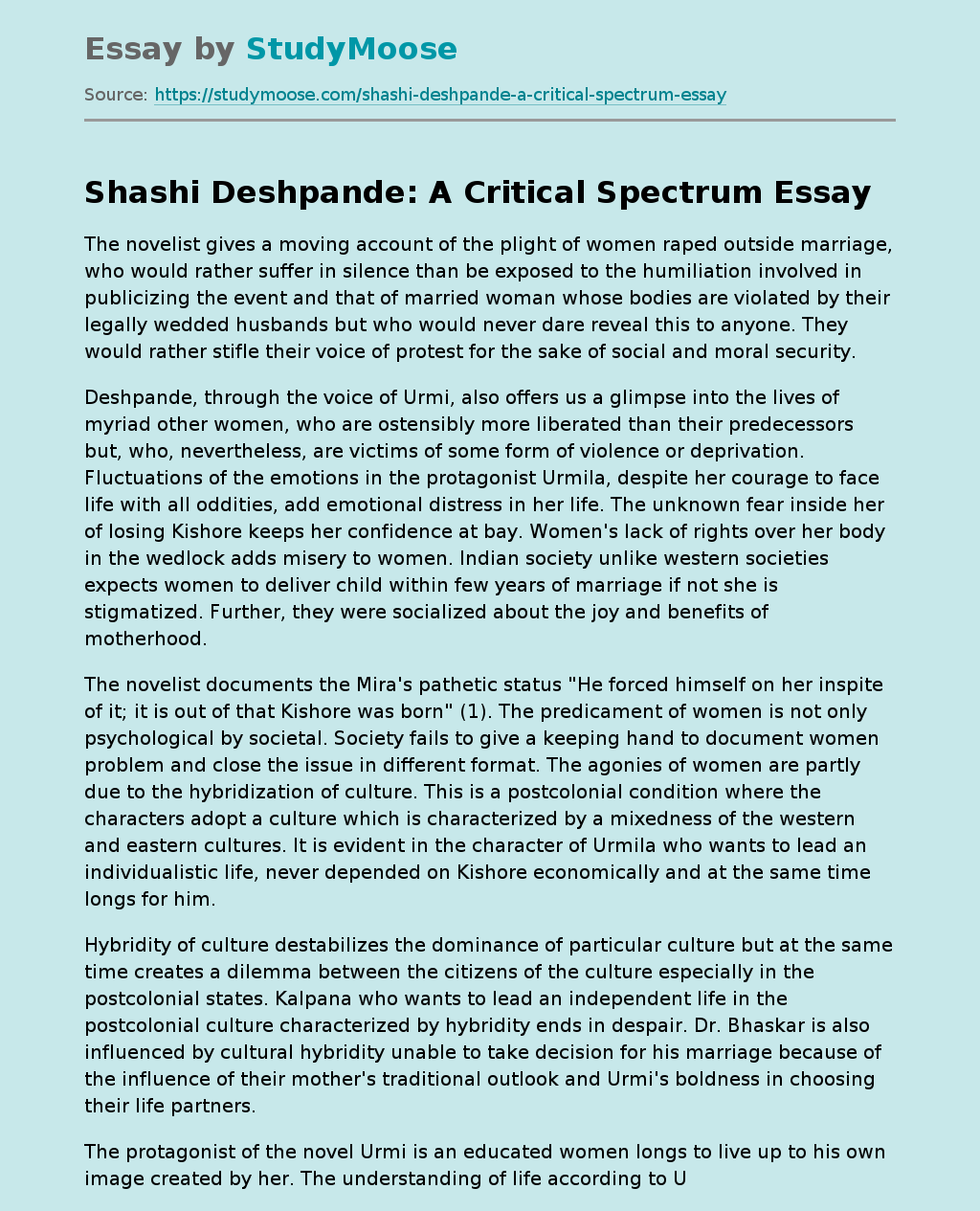