The Role of Motherhood in Sula

As seen by many different mothers in the novel Sula by author Toni Morrison, mothers play an important part in kid’s life, shaping how they view different beliefs in the world and setting up values in their child. Every individual’s life is shaped by personal relationships they have with others. The mother and child relationship greatly affects the identity development in the kid. As seen in the racist community in the novel, the mother and kid relationship is important in the sense that the mothers and children share understanding of the sexist oppression, intertwining their lives together even more than they already were.

Eva was a good mother from the beginning. She always wanted the best for her family and most importantly her kids before taking care of herself. 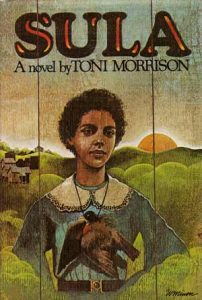 Though hard to understand by her children, Eva even kills one of her sons in order to release Plum from his heroine addiction and she leaves her family for eighteen months in order to make money and fend for her family. The eighteen month gap severely influenced the emotional relationship between Eva and Hannah.

Eva never even chooses to share her misdoings with her daughter Hannah. At one point, Hannah even says to her mother, “Mamma, did you ever love us?” (Morrison). (Morrison, Toni. Sula. New York: Vintage International, 2004. Print. Further references to this work will be documented parenthetically in the text. In order to deal in which the poverty her family was living in, Eva detached herself emotionally from her kids. To Eva, giving up many things to insure the well being of her children shows sufficient proof of her motherly love. Eva then replies to Hannah’s question by saying, “ ‘You settin’ here with your healthy-ass self and ax me did I love you? Them big old eyes in your head would a been two holes full of maggots if I hadn’t’ ”. However, to Hannah, providing material needs does not add up to her definition a loving mother: “ ‘I didn’t mean that, Mamma. I know you fed us and all.

I was talkin’ ‘bout something else. Like. Like. Playin’ with us? Did you ever, you know, play with us? ’ ”. Though Eva has sacrificed everything for her kids, Hannah thinks that personal attention from her mother is imperative for feeling loved. In response to Hannah, Eva can only respond in terms of how she tried everything to secure their survival. Hannah, then, goes on to ask her mother about why she killed Plum and Eva’s response was “[l]ike two people were talking at the same tine, saying the same thing, one fraction of a second behind the other”. This narrative reflects Eva’s double identity.

Eva, goes on to explain how she killed Plum because she could not handle to see her son deteriorate and behave like an infant. Hannah with replies with such a little response, acting like nothing had even happened. Although Eva and Hannah attempt to discuss important issues, their lack of communication in the end show how neither women receive the acknowledgment and understand they each long for. The unsuccessful communication between mother and daughter, and the lack of a mother figure influences Hannah’s ideas about parenting, resulting in Hannah not knowing how to raise her child properly.

The deteriorating relationship between Hannah and Eva Peace affects their mother-daughter bond and how Hannah chooses to raise her child on her own. The denial of love between Hannah and Sula Peace forces Sula to find someone else to confide in, Nel, and change her ways to her mother and society’s expectations. Sula, being raised in an unconditional household, was the exact opposite of what the society considered normal. Because of the sexual confidence Hannah Peace has, Sula must disguise her difference, just like her grandmother Eva had too.

Eva’s drastic measures were repeated by Sula an act of survival and denial of powerlessness and vulnerability. Nel and Sula are regularly picked on by the same group of boys, causing Sula to take matter into her own hands. At one point, Sula takes out a knife and cuts off part of her finger saying, “If I can do that to myself, what you suppose I’ll do to you?” . This severe act if Sula’s moment of self-recognition of her connection to her grandmother Eva.

Here, Sula realizes that she has to fight against her own vulnerability, and establish her identity, hereby following her grandmother Eva’s example. Though this moment shows Sula’s inner strength, it can never disguise her enough of being different from the rest of her community. Just as Eva and Hannah, Sula continues the unpreventable, mature line of breaking past the typical gender roles of the time. Eva’s overly independent attitude and removal from caring and mothering a daughter correctly, leaves her daughters with unlearned, societal caretaking skills.

This results in Sula’s highly inappropriate and unnecessary act of clumsy caretaking within her relationship with Nel. Yet, it is understandable because Sula has never been taught normal and conventional means for problem solving. The denial of motherly love from Hannah especially hurts Sula when she overhears her mother say, “I love Sula. I just don’t like her”. This rejection of love causes Sula and Nel to accidentally kill a town boy, Chicken Little, leaving her with two formative events in her life.

Her lack of responsibility and no motherly love left her with “The first experience taught her there was no other that you could count on; the second that there was no self to count on either”. Sula has a lack of maternal love which makes her feel disconnected from her family on a personal level. Hannah and Sula’s lack of a close, personal relationship is due to the distance Hannah had from her mother Eva, leaving Sula distanced the most from her family and feeling like she has to prove yet change herself in order to fit in.

Though the Peace family and the Wright family differ in terms of class and status, the similarities of Helene and Nel Wright’s relationship to the Peace family make it clear that there is a lack of communication and maternal support. Where as Eva Peace goes against society’s norms and amputates her leg for her family, Helene can be characterized as someone who tries everything in her power to live up to the expectations imposed on her by her upbringing and environment. Helene being born by a prostitute and raised by her grandmother, she feels the need to flee from her hometown and marry an outsider of her community.

Once settled in the Bottom, Helene tries to live up to the expectations her grandmother inflicted on her. Helene was “[a] women who won all social battles with presence and a conviction of the legitimacy of her authority. […] She lost one battle – the pronunciation of her name. The people of the Bottom refused to say Helene. They called her Helen Wright and left it at that” . The metaphor of the town not being able or wanting to pronounce her name correctly shows that they did not want to adjust to her standards because she insults the Bottom by bringing in her new, proper, manners.

Not only does Helene take on many different responsibilities, she also manipulates her family, to feel as distant from her family and background as possible: “[She] enjoyed manipulating her daughter and her husband. She would sigh sometimes just before falling asleep, thinking that she had indeed come far enough away from the Sundown House” . By doing this, Helene can escape feelings of disgrace and live an ethical life. Helene leads a moral and respectable life because it is motivated by her own fear of rejection by society.

Her life may even be more of a refusal of her former life than an assertion of her new one. Helene’s relationship with her mother influences her behaviors and identity and has forced her to power her daughter’s life more than it has her own. Helene has tried to make her aware of her plain looks by saying that she was happy “that the child had not inherited the great beauty that was hers: […] that she had taken the broad flat nose of Wiley (although Helene expected to improve it somewhat) and his generous lips” .

Helene does not accept the way her daughter was born and how she looks so she attempts to “ ‘[p]ull [her] nose’ ”  with a clothespin, creating a gap in their mother daughter relationship and forcing Nel to become more self-conscious of herself. The miscommunication between Eva and Hannah Peace is also seen in Helene and Nel Wright. On the train ride down to the funeral, Nel becomes conscious that her mother wants to live a well thought-of life, yet it is easily put down by variables such as racism.

As the rest of the train ride is told in Nel’s perspective, readers get to see the effect of the experience on Nel and how she perceives her mother. This shows how a mother truly does have effect on her daughter, but also how influenced African-Americans are by the racial factors in society. By Helene attempting to live above the standards in the Bottom, she is discriminated against by whites and her own community. Her discriminatory life affects the communication between her and Nel, showing that by Helene and her mother having a lack of communication affects the relationship between Nel and Helene and how much they share with one another. The trip affected Nel in that she changed. By the conductor humiliating her, she felt an emotional distance between her mother and grandmother. She begins her new way of life by stating, “I’m me. I’m not their daughter. I’m not Nel. I’m me”. She has come to realize and see how her mother has failed in life by manipulating her family, not adapting well to society, and not having a decent relationship with her own mother, therefore affecting her relationship with her own daughter Nel.

Helene and Nel Wright has a lack of communication in their relationship, pushing Nel away from her mother and looking towards Sula, a new role model for her to follow. The novel Sula by Toni Morrison, shows the relationships between various mother’s and their children, leaving readers with the sense that the kids are deeply affected by their mother’s participation in their lives and how much communication goes on between the two.

Though all of the families are different and have separate problems in each life, all of the stories seem to intertwine. Illustrating that the children want to become different from their mothers, yet the kids are never able to succeed. Regardless of the daughters wanting to find their identity themselves, the mother-daughter relationship which is influenced by race and society’s expectations confirms that these are the most determining points in identity progress.

The Role of Motherhood in Sula. (2020, Jun 02). Retrieved from http://studymoose.com/role-motherhood-sula-new-essay

Related Essays
Don’t waste time
Get a verified writer to help you with The Role of Motherhood in Sula
Hire verified writer
$35.80 for a 2-page paper
Stay Safe, Stay Original