Oligopoly is said to prevail when there are few firms or sellers in the market producing or selling a product. Oligopoly is of two types- pure Oligopoly where the product is same and differentiated oligopoly where the product is different. When we talk about soft drink market in India, the two major names which come in our mind are PepsiCo India and Coca Cola India Ltd. Which comprise of almost the whole chunk of soft drink market and that is what makes that market a differentiated oligopoly and almost a perfect duopoly.

Don't use plagiarized sources.
Get Your Custom Essay on Oligopoly Market of Soft Drink Just from $13,9/Page

They have been present since almost three decades now and have not faced any kind of competition since their inception in Indian market CHARACTERSTICS Interdependence- Less number of firms results in greater interdependence. Any change in price or output by a firm has a direct effect on the rival, which then retaliates and changes its own price or output. So, the oligopolist not only considers the market demand for the industry’s product but also the reaction of other firms in the Industry and more than one reaction pattern is possible from the rival’s side.

This phenomenon is evident in soft drink as well.

Since their inception in Indian market every time there has been some specific price setting it h was a simultaneous move and not a sequential move. Coke was a company ruling the markets before Pepsi entered. Earlier the price of coke was cost based i. e. it was decided on the cost which was spent on making the product plus the profit and other expenses. But after the emergence of other companies especially the likes of Pepsi, Coca-cola started with a pricing strategy based on the basis of competition. Nowadays more expenses are spent on advertising by soft -drink companies rather than on manufacturing .

Coke has brought in a revolution especially in Indian markets with the Rs. 5 pricing strategy which was very famous. It was the first company to introduce the small bottle of Coke for just Re. 5 . This campaign was very successful especially with the price conscious Indian consumers. Even today most prices of Coke are decided on the basis of the competition in the market. Pepsi again decides its price on the basis of competition (rival’s action). The best thing about the company Pepsi is that it is very flexible and it can come down with the price very quickly.

The company is renowned to bring the price down even up to half if needed. Though lowering the price would attract the customers but it would not help them cover up the cost incurred in production hence causing them losses. It has covered all its losses and is now growing at a rapid rate. Group behavior-Theories of perfect competition and monopolistic competition (with more number of firms) present no difficult problem of making suitable assumptions about human behavior. In case of Perfect Competition and monopolistic competition we assume that business firms work to maximize their profits.

Assumption of profit maximization gives overall good result in the situations where mass of people are involved and there is no interdependence of firms. Similarly theory of monopoly deals with soul individual and it is appropriate to assume the profit maximizing behavior on his part. As there are two major firms in Indian soft-drink industry, and the behavior is almost similar we can consider it a group and that is the reason why this behavior can only be anticipated and not predicted. They might work for common benefits or pull each others legs.

Non price competetion- more prominent than price competition because in oligopoly the firms may compete in terms of product design, advertising or packaging. This is very much apparent in the soft-drink industry. Every time Pepsi comes out with a new logo in their labeling, Coca Cola response with a similar move. Every time we see a new advertisement of Sprite, Mountain Dew comes up with an advertisement involving similar messages. Firms are often not motivated towards maximization of current profits but are more interested towards maximization of sales or turn over which may affect current profit.

This behavior is obvious by respective shares of both firms in the market, carbonated drinks comprise of 50% share of the whole soft-drink market and in that, the market share occupied by Coca-Cola is 50% and Pepsi is 45%. Barriers to entry: the competition in oligopoly is high. Less number of sellers imposes more barriers to entry. The factors that made the soft drink market a duopoly and entry of competition difficult includes: Network Bottling: Both Coke and PepsiCo have franchisee agreements with their existing bottler’s that have rights in a certain geographic area in perpetuity.

These agreements prohibit bottler’s from taking on new competing brands for similar products. Also, with the recent consolidation among the bottler’s and the backward integration with both Coke and Pepsi buying significant percent of Bottling companies, it is very difficult for a firm entering to find bottler’s willing to distribute their product. The other approach to try and build their bottling plants would be very capital-intensive effort with new efficient plant capital requirements in 2009 being more than $500million.

The advertising and marketing spend in the industry is very high by Coke, Pepsi and their bottler’s. This makes it extremely difficult for an entrant to compete with the incumbents and gain any visibility. Brand Image / Loyalty: Coke and Pepsi have a long history of heavy advertising and this has earned them huge amount of brand equity and loyal customer’s all over the world. This makes it virtually impossible for a new entrant to match this scale in this market place. Retailer Shelf Space (Retail Distribution): Retailers enjoy significant margins of 15-20% on these soft drinks for the shelf space they offer.

These margins are quite significant for their bottom-line. This makes it tough for the new entrants to convince retailers to carry/substitute their new products for Coke and Pepsi. Fear of Retaliation: To enter into a market with entrenched rival behemoths like Pepsi and Coke is not easy as it could lead to price wars which would affect the new comer. Indeterminateness- the demand curve shows what amount of its product firms will be able to sell at different price ratios.

This demand curve can be easily ascertained in monopoly, monopolistic competition and perfect competition but the situation under oligopoly is quite different because of interdependence of the firms. Under oligopoly a firms cannot assume that its rivals can keep their prices unchanged, when it makes changes in its price. The solution for determination of price and output cannot be provided by any economic theory.

Soft-drink Industry in India, a perfect duopoly, faces a constant price, since there has not been any change in price level since 2005. Both the firms aim to maximize their profit through market share. They compete in terms of volume.

Price rigidity in oligopoly is often termed as price stickiness, i. e a single price stays for long term unless there is significant change in cost or other factors. Due to this stickiness the demand curve has a kink, the portion of demand curve above the price is elastic & the one below it is inelastic. This unique feature of demand curve is due to assumption about rivals’ behavior. If a firm reduces its price, the rival follows the suit and consequently firm’s expectation about increasing its market share is not fulfilled.

However, increase in price is not matched by the rivals and the firm loses its market share due to costlier product. Price increase by an individual firm decreases sales substantially but price reduction by the same firm does not increase sales to any significant extent. In the figure below, if firm increases the price above the point- P i. e by PP1 then quantity decreases by MM1, this is the elastic portion of demand curve as percentage change in quantity is more than percentage change in price .

While, if we decrease the price by same amount there is only a marginal increase in quantity. This is the inelastic part of demand curve, as change in quantity is less than change in price. Faced with this scenario the best course for oligopoly market is to stick to present price. In 2002, Coco-Cola came out with 200ml bottle for Rs. 5/-. Before that both coca-cola and Pepsi were operating with just one variant of their soft drink bottle and that was a 300ml bottle and it was priced at Rs 10/-, this variant worked for almost a decade and there was no change in its price at all.

However in 2005 the price of 200 ml bottle was revised to Rs 8/-, this was after the firms had stopped production of those bottles for almost an year and a half because of sales not matching the expected level. 600 ml pet bottles were launched in 2002 for rs 20/- and the prices were revised to rs 25/- in 2005 due to increase in plastic polymers & a hike in fuel prices. The most noticeable aspect in the above stated matter about change in price is that every time there was a change in price it was a simultaneous reaction from both the firms which kept the demand constant.

The industry structure for several decades has been kept intact with no new threats from new competition and no major changes appear on the radar line. * This industry does not have a great deal of threat from disruptive forces in technology. * Coke and Pepsi have been in the business long enough to accumulate great amount of brand equity which can sustain them for a long time and allow them to use the brand equity when they diversify their business more easily by leveraging the brand. 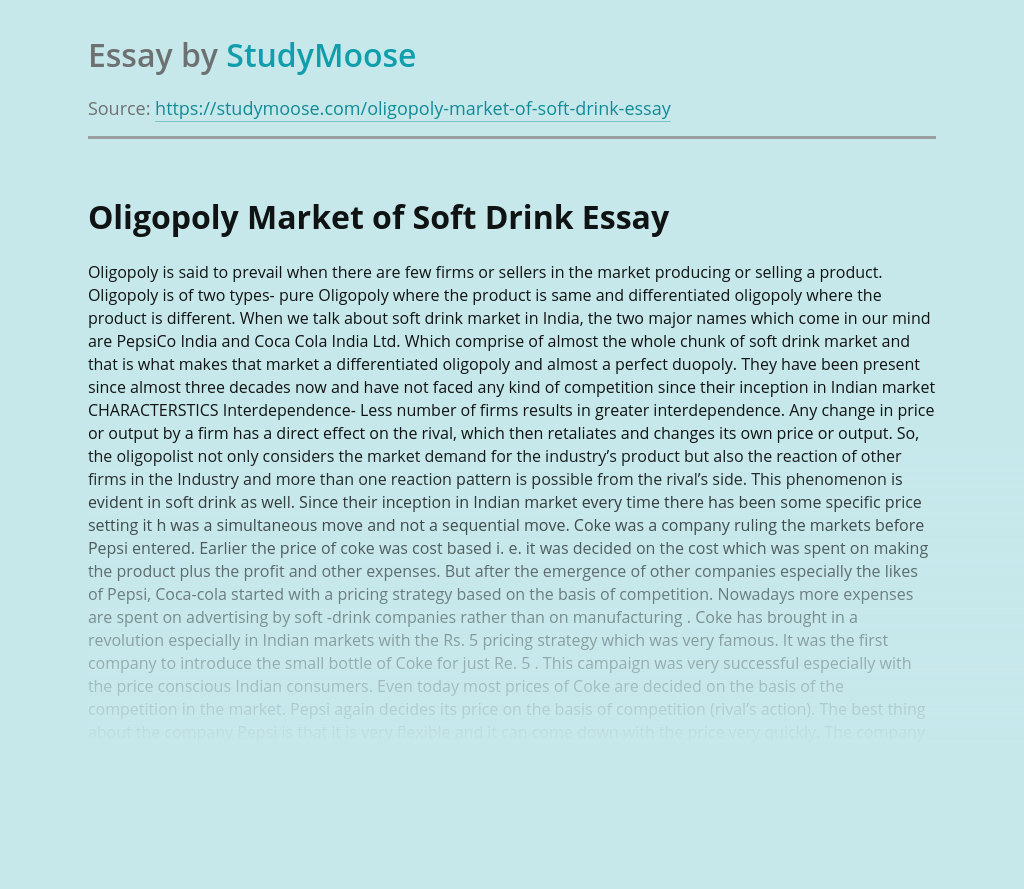