The Main Character’s Wealth and Weaknesses in Hemingway’s Stories

Ernest Hemingway’s characters in the story entitled “Farewell to arms” brought both weakness and wealth throughout the novel. These aspects mould the characters to overcome the conflict and form a resolution at the end of the narrative. Lieutenant Frederick Henry and Catherine Barkley are the main characters in the story. Frederick is the main protagonist and narrator of the text. He unravels the love that emerged between him and Catherine and developed into a deeper relationship.

Through their journey of love and career, they have depicted their weaknesses and strengths that both of them gained and acknowledge.

Don't use plagiarized sources. Get your custom essay on
“ The Main Character’s Wealth and Weaknesses in Hemingway’s Stories ”
Get custom paper
NEW! smart matching with writer

Love brought them together and became their strength but failure gives them the space to show their weaknesses. Frederick’s character depends on the character of Catherine. He works hard because she found Catherine. It brought strength to him but it also unleashes the weakness within him. The way he turned down his army brought her the incapability of being part of the servicemen.

This is the same with Catherine.

Catherine is a beautiful and worthy nurse in the camp. This wealth relates with her weaknesses after she found Frederick in her heart. When she loved Frederick, she rely her character to him. Her strength was Frederick and not her work after she entered a relationship with him. Despite of her wealth as a nurse, she took that for granted because she focused her attention to her love and child that brought her to death as her weakness. It shows that one could not able to present his or her characterization without the help of the other.

Therefore, the main factor that brought weakness and wealth to the protagonists’ depiction is love. Hemingway’s story entitled “For whom the Bell Tolls” has many characters. All of them are important in the completion of the whole narrative. The story is in second person point of view. The narrator illustrated the situation in the battlefield where there are problems and pains within the characters. Robert Jordan is the main character in the story. He focused his attention on his own goals.

He did not want to obtain other purposes and aims of others. His aim is more important than any other things. Despite of the being a professor, he still needs to learn many things. That is why the author created Anselmo – Robert’s guide and friend. Through Anselmo, Robert could able to picture the future circumstances of his actions. Robert’s strength lies within his knowledge. Because he is a professor, he knows many things when it comes to Civil war. He acquired different ways of learning as he revealed his tactics slowly.

His mission succeeds but his own identity is not complete. He is still weak as a person because he could not able to face the things alone. He always asks Anselmo to be his guide. Despite of the fact that he is a professor, he used Anselmo because Anselmo had the experience of war in history. He just started to fight but could not able to acquire the real situation of the battle. It shows that the character’s wealth was his profession but his weakness was his incapability to feel the reality of battle despite of his knowledge.

In this case, despite of the main character’s transformation throughout the story, he could not able to diminish his weaknesses that evolved and developed along with his personality development. Hemingway’s story entitled “A Moveable Feast” is a presentation of his own being during his living in Paris. He portrayed his life as a young and poor writer. It is a non-fictional story because he showed his real identity of his personality that could only recognized after his death when his fourth wife published this novel. It is a simple justification of human journey in the eyes of a writer.

This is how Hemingway is being created and mould by his environment and surroundings. His experiences as a writer and observer in the society of Paris showed different forms of transformation that emerged into his personality and ideology. Along with his other stories, Hemingway also showed his own weakness and wealth throughout his journey in Paris as what the novel has tried to convey. He is a gifted man with good ideas and creativity that brought him into the world of literature. Before he entered literature, he is a former journalist of one of the newspapers in Paris.

He learned how to motivate characters and soon left journalism and attached his being in literature where there are images, fictions, and facts that can be combined into a whole story. On the other hand, he is poor and young. Many of had rejected his first few attempts. He became weak after being rejected by some publishers and writers. He also showed in the story that he is an unimportant a poor person without something to give for his own self and wife. There are instances in his life that he needs to stay at a bookstore and read some books because he could not buy a single book.

This became his main weakness in the story. However, many analysts and critics has stated that the way he depicted his life, Hemingway brought inspiration to many especially to those who wanted to become writers of literature. As a conclusion to this, the three stories of Hemingway revealed the different symbolizations of weakness and wealth as combining elements of his themes and resolution. At the end of the novels, wealth is still attached to weakness to show the humane side of the characters pertaining to success and failure.

Essay on A Farewell To Arms

The Main Character’s Wealth and Weaknesses in Hemingway’s Stories. (2020, Jun 02). Retrieved from https://studymoose.com/main-characters-wealth-weaknesses-hemingways-stories-new-essay 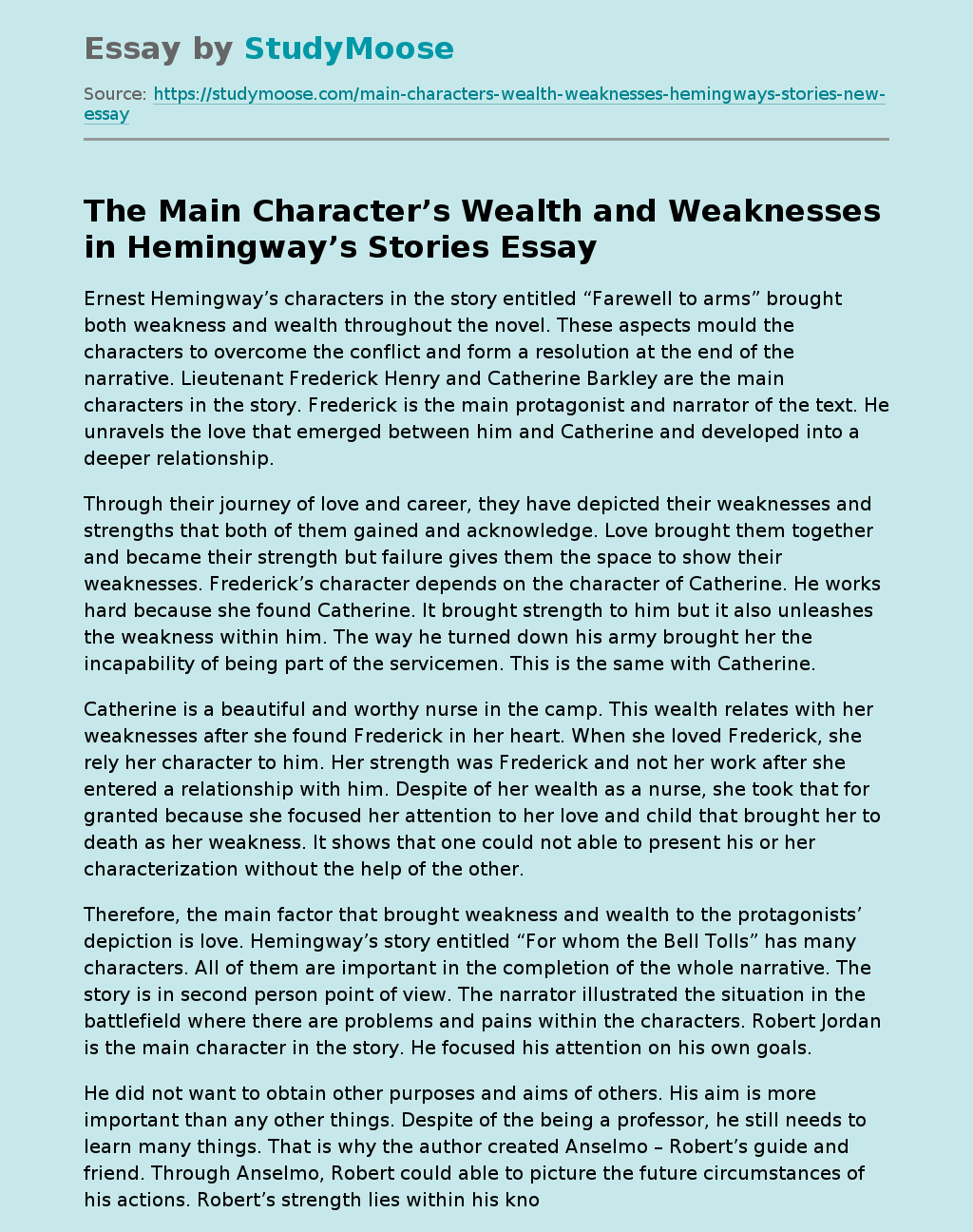