Privacy was once valued and protected. But now with so many new and convenient technological advancements, is privacy in the 21st century possible? To protect our privacy Congress created the Electronics Privacy Acts (ECPA) to protect us from government access to private information that is transmitted and stored on the Internet, such as emails, private photos, or corporate data.

Congress has not updated the ECPA on technology since it was created, in 1986. When the ECPA was created there was no “World Wide Web”, social networking was something in the future, and nothing was stored in what we call the “cloud.

Don't use plagiarized sources.
Get Your Custom Essay on Is Privacy In The 21st Century Possible? Just from $13,9/Page

” With all the technological changes in today’s society no one is protected. Privacy is defined as being free from the public eye. Yet we have so many people sharing personal information on social networking websites, and government agencies monitoring emails, and phone calls most of the time without our knowledge. There is no privacy in the 21st century, it is just a nostalgic feeling, and it is no longer practiced.

Today’s privacy laws aren’t up to date with today’s technology. Things are rarely sent through the mail, and emails and text messages have replaced written communication. Online messaging and social networking was something of a novelty when lawmakers created the ECPA (Frolik, 2013). A recent article from the Dayton Daily news written by Cornelius Frolik on June 2013 he mentioned, “The Government can easily access many personal communications and other private information without sufficient probable cause”. Instead of acquiring a warrant that requires more standards and procedures. Government agencies instead obtain subpoena’s to obtain people’s emails, and telephone records (Frolik, 2013). Although, local authorities catch lots of dangerous criminals through information online like emails, photos, and social media sites like Facebook some critics still feel it is an invasion of privacy.

Also as our technology advances by leaps, and bounds so does the way Government uses new high tech tools to surveillance law-abiding citizens. Though our Fourth Amendment states to protect the American people from unreasonable searches and seizures. Almost everything is done through technology in the 21st century. This meaning that government can seize any emails that are 180 days or that has been opened without a warrant; subpoenas have become the most used investigator tool for Government agencies. The reason why is because they can be easily written inside the prosecutors office without any further review from a judge.

This means there is an exception to the Fourth Amendment of the United States Constitution, if it satisfies the requirements. The question we should be asking when it comes to Government and our privacy are ” Is to explain a clear understanding of the word privacy”? If the Government cannot clarify the term privacy then how can they protect our privacy? The lack of clarity makes it hard for lawmakers to create new policies that will keep our privacy out of harm (Libin, 2012). Two reasons why privacy can be considered threaten in today’s society one being the Government powers are limitless, and two being we the American people expose ourselves digitally (Libin, 2012). The people of America should come together and declare for the Government to protect our privacy rather than participate in warrantless searches (Libin, 2012). The fact that the Government can argue that the Fourth Amendment does not apply because there is no exception to privacy when it comes to protecting national security, then that leave the American people in times of calamity, and crisis.

Laws like the ECPA is a law that the Government has an obligation to respect (Libin, 2012). The ECPA protect the privacy of the electronic communications, but when law enforcement and prosecutors have to protect and enforce laws, personal information has to be collected to build a case (Libin, 2012). The solution is more complex than simply, and right now the Government is facing difficulties figuring out the best way to protect the American people (Libin, 2012). Given all the information privacy seems to be the problem. It can be portrayed in many ways, one as it’s protecting the public from terrorism, and local crime; and two being if you are innocent, what do you have to hide?

In 2014 I find that most American people store their digital lives in what we call “The Cloud” which included emails, calendar data, photos, and other sensitive information. The ECPA has become obsolete. Technology today leaves the ECPA outdated, the laws have not changed since it was originally created in 1986. The existing privacy laws only focus on the text-based personal records, and the issues that people face today with this outdated privacy law is gathering of digital multi-media files, and the way this unauthorized data is used (Lipton, 2010). Do you consider video surveillance systems out on the street personal data? Some may say yes and some may say no. According to a case study researched by Jacqueline D. Lipton, if the face of an individual is recognizable, than it is considered personal data. Some people feel protected with the video surveillance capturing their every moment.

Then on the other hand some people feel they are being scrutinized being watched by video surveillance. The U.S. has a protection for free speech and for free of a press under the First Amendment. However there is no express constitutional right to privacy (Lipton, 2012). The question that American people should rigorously examine is whether or not Congress should repeal the ECPA and creates new privacy laws to replace it (Kerr, 2014). The ECPA should be considered top priority when it comes to being reformed. If Congress were to start fresh on what changes to make on the ECPA the technologic changes would have to be particularly considered.

Is Privacy In The 21st Century Possible?. (2016, Aug 05). Retrieved from https://studymoose.com/is-privacy-in-the-21st-century-possible-essay 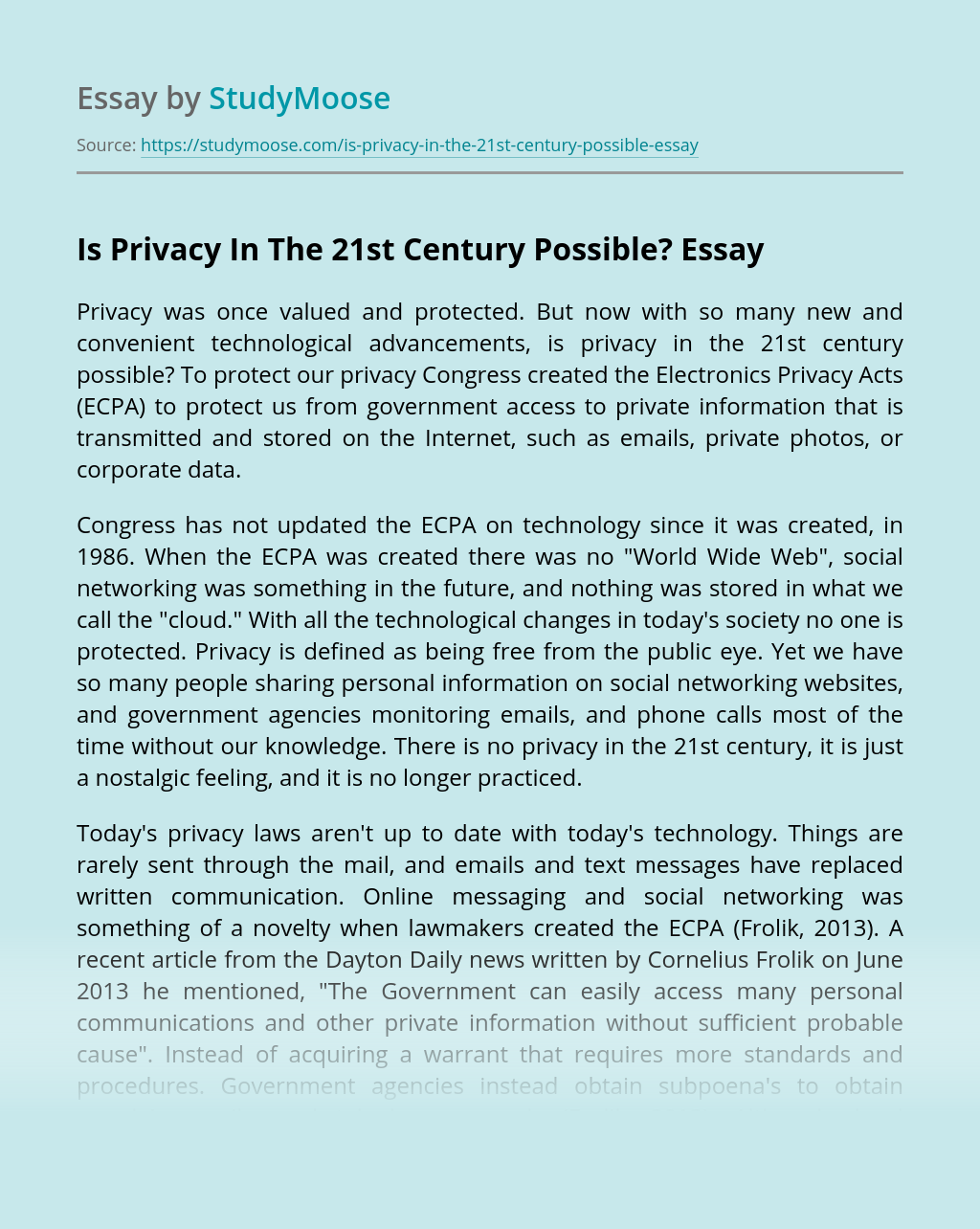 VLC technology, one of the advanced optical wireless communication technologies, in which light in the visible region (375nm-780nm) is used as a medium for data transmission is more secure and achieves high data rates as compared to conventional wireless technologies like Wi-Fi, Bluetooth, Wimax etc., which use radio waves for communication. Till late 1990s infrared...

In the age of technology, trends come and go almost instantaneously. The trend of the decade; Social Media. Ten years ago when someone thought of Social Media, he or she only thought about Myspace. Today, however, Myspace is an afterthought, and there are two new faces atop the Social Media world. These new faces are...

Everyone has experienced, at one time or another frustration of feeling misunderstood and being unable to make us understood by others. Communication should be simple but is often difficult because people tend to create barriers. Barriers often lead to your message becoming unclear and confusing to others. For communication to become more effective one has...

View sample
How does communication device helps students in their studies

Interaction is a message conveyed with words, body movement, vocal inflections, and individual space and the meaning understood by the recipient. Problems take place when the message received is not the message sent out. What’s My Communication Style assesses and determines a person’s control interaction style. It outlines the strengths and weak points of the...