Describe the influence of two contrasting economic environments on business activities within a selected organisation. There are two very important economic environments that effect Tesco, economic growth and the recession. An economic growth will be good for Tesco as business will be booming, more goods are being produced and profits are increasing. When this happens Tesco becomes a very high profit business and invest in new products or stores which can lead to Tesco being more profitable business wise. Profits are increased during economic growth as customers want more products; they have the money to spend and choose to spend it in Tesco’s.

Don't use plagiarized sources.
Get Your Custom Essay on Influence contrasting economic environments Just from $13,9/Page

This leads to a much higher product demand, which affects the primary sector – farmers. Farmers will need more animals and more farm hands effectively as they are producing for a large company and if the demands aren’t met they will lose business. For example during an economic boom people tend to buy luxuries as they have the spare money to spend, so a customer instead of buying a ready meal might decide they will have a steak instead and there could be a large amount of Tesco’s customers with the same thought process, this will in turn mean that Tesco will order a large amount of steak’s from the farmers and if they can’t supply this they will lose Tesco’s business and also Tesco won’t be able to meet its customer demands and could also lose business.

People will also stop buying Tesco value products such as cereal, canned goods and start buying branded names as they can afford it and we are a brand loving country which means that Tesco generate more money as people are buying the much more expensive goods. In 2011/2012 Tesco had a reasonable growth in profit even in a challenging economic environment, Tesco’s sales increased by 7.4% to £72 billion.

Tesco however did not make the profit that they would have liked they were running their business in a very challengeable time during 2011/2012 as the recession is still very much taking over the economy, they managed to survive by offering their customers Tesco value products at next to nothing prices which were bought a lot more due to their cheap prices offering more competition for companies such as Lidl. During a difficult economic climate consumers cut down on spending in an attempt to try and save money as the cost of living increases but wages don’t. This means that Tesco would have cut down on orders to manufacturers for example the steaks, no one would have been buying them and they may have cut their order from 1000 to 400 for example.

The current interest rates can also effect a company like Tesco because if they borrow a loan from the bank then if the interest rates are high then Tesco will end up paying back more money than the original borrowed amount, however if they are lower than it would be the best time for Tesco to borrow if they need to because although they will still be paying back more than what they borrowed however it will be a much lower amount. Inflation rates can also present problems as they decrease and increase over time; if the rate of inflation is high the Tesco will increase their prices to compensate for the rise however this will decrease their sales because customers won’t be willing to pay the higher prices. GDP (Gross National Product) is the market value of all goods and services over a certain period of time if the GDP increases by 3% it means that the economy has grown by 3%, this has an impact on everyone in the economy because it affects the stock market which is something that any potential investor will take into consideration before they invest.

Tesco will see wage increase in a healthy economy and higher profits as Tesco’s products have a demand increase. Cancer Research UK will have struggled during the recession and current times as people are cutting down on spending and unlike Tesco Cancer Research are selling things that yes people need, however their products aren’t essential therefore they will be losing lots of money and may have to cut down money on research and support. They have a much smaller budget that has to be spent carefully in order to prevent a negative impact on the business; recently Cancer Research has not had the funding to research into new types of cancer and develop knowledge as they have had such little funding. During an economic boom however Cancer Research will hopefully make plenty of money to fund research and support as people will have more money to spend on clothes and shoes. They are able to offer a lot more support and can do extensive research into new kinds of cancer as they have the funding. Inflation can affect a business like Cancer Research UK but not as much because they don’t buy in their stock it’s all donated by customers, however they may slightly increase their prices which in such a difficult economic climate is something that they desperately want to avoid.

GDP will affect Cancer Research because they may see an increase in customers if the GDP was low because typically there are high rates of unemployment at times like that and people still need clothes to wear and rather than pay high street prices people with go to the charity shops and buy cheaper second hand clothes. However if the GDP increased then Cancer Research may see a decline the their sales and customers because there are high levels of employment during a high GDP and people with have more money to spend on high street trends. 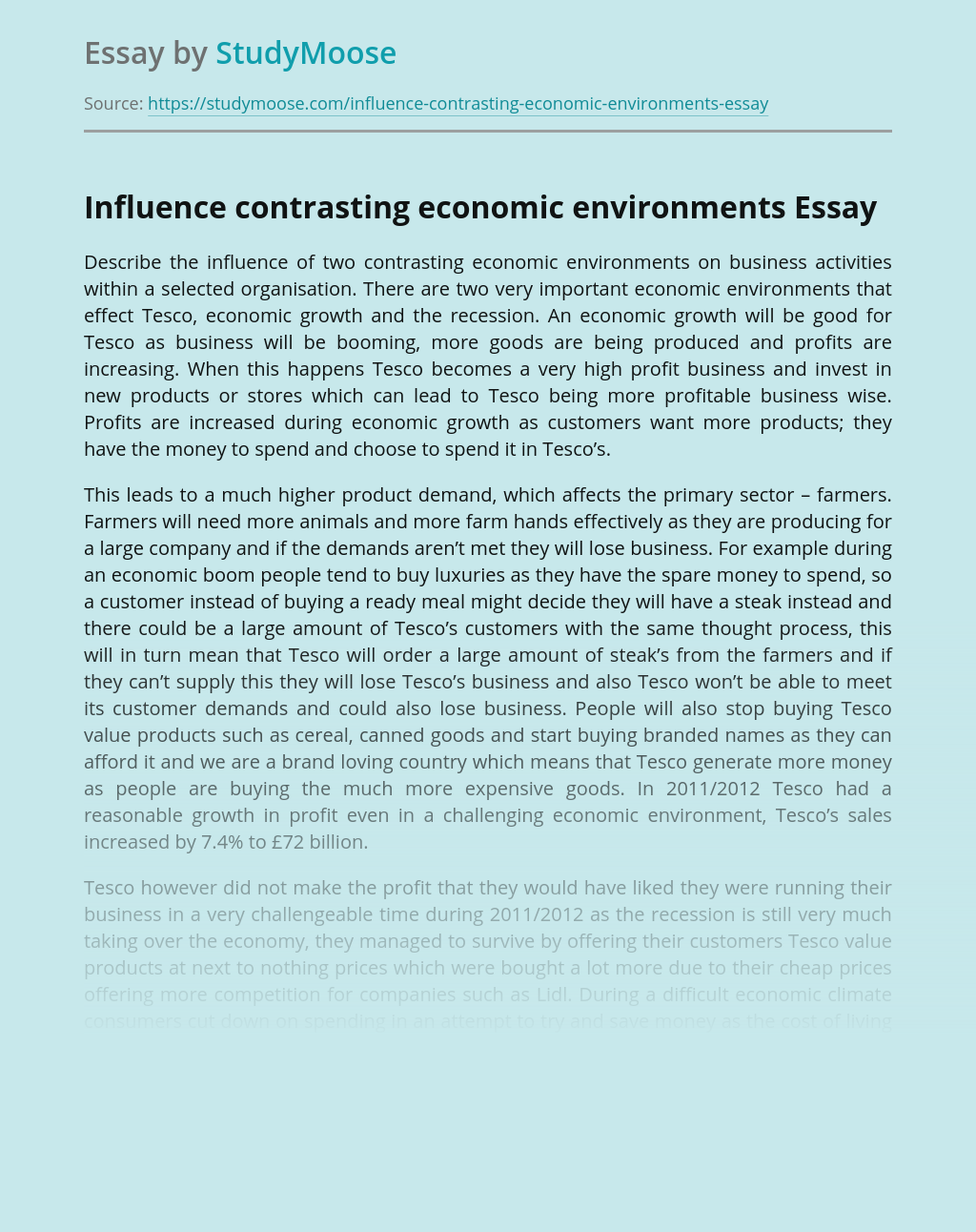 International Business- Failure of Joint Venture as a Result of Culture

1. Joint venture between TCL and Alcatel In 2004, TCL Technology Holdings Limited, a multinational electronics conglomerate from Huizhou, China entered into a mobile phone manufacturing Joint Venture with Alcatel, a global corporation in telecommunication equipments, services and applications from Paris, France, in a bid to foray into the global market. The joint venture company...

Get Essay
Contemporary issues in marketing

Contemporary issues in marketing Introduction             Tesco is a UK-based international grocery and general merchandising retail chain. In the recent past, Tesco has undertaken an array of marketing activities to benefit its marketing strategies and corporate social responsibility. The company has invested in a range of own-label products, in-depth market...

Principles of Supporting Change in a Business Environment

Change occurs frequently and rapidly in the workplace. Change in business has become the norm and businesses need to evolve to keep up with the demands of the modern world. Most of the people regard change as intimidating. It is often natural. It has great significance in business thus change does bring good for the...

Principles of supporting change in a business environment

You should use this file to complete your Assessment. The first thing you need to do is save a copy of this document, either onto your computer or a disk Then work through your Assessment, remembering to save your work regularly When you’ve finished, print out a copy to keep for reference Then, go to...