The Miguel Lopez de Legazpi Expedition – the only expedition that was successful in colonizing the Philippines. After the unsuccessful expedition of villalobos, King Charles I decided to stop sending colonizers to the Philippines. When his son, King Philip II tool over, he continued the expeditions. Philip sent Miguel Lopez de Legazpi and fray Andres de Urdaneta. Urdaneta survived the de Loaisa expedition. On February 13, 1565, Legaspi’s expedition landed in Cebu island. After a short struggle with the natives, he proceeded to Leyte, then to camiguin and to bohol.

Don’t waste time
Get a verified writer to help you with Colonization by The Miguel Lopez de Legaspi Expedition
Hire verified writer
$35.80 for a 2-page paper

There Legaspi made a blood compact with the chieftain, Datu Sikatuna as a sign of friendship. Legaspi was able to obtain spices and gold in bohol due to his friendship with Sikatuna. On April 27, 1565, Legaspi returned to Cebu.

The head of Cebu was Rajah Tupas who waged war against Legaspi. He destroyed the town of Raja Tupaz and established a settlement. While searching for survivors One soldier Juan Camus found a statue of the child jesus still intact.

Upon verification, it was the same sto. Niño that was given by Magellan to Queen Hara Amihan in 1521 Legaspi ordered the construction of a church.

Called it San Agustin Church Later, renamed it to Basilica Minore Del Santo Niño. On orders of the king Philip II, 2,100 men arrived from Mexico. It was colonized by Spain. They built the the port of Fuerza de San Pedro which became the Spanish trading outpost and stronghold for the region. Hearing of the riches of Manila, an expedition of 300 men headed by Martin de Goiti left Cebu for Manila.

At first they were welcomed by the natives and formed an alliance with Rajah Suliman (Carlos “Botong” Francisco), their Muslim King. But as the locals sensed the true objectives of the Spaniards, a battle between the troops of Suliman and the Spaniards erupted. Becouse the Spaniards are more heavely armed, the Spaniards were able to conquer Manila. Soon after Miguel Lopez de Legaspi arrived to join Goiti in Manila. Legaspi Built alliances and made peace with Rajahs Suliman, Lakandula and Matanda. In 1571, Legaspi ordered the construction of the walled city of Intramuros and proclaimed it as the seat of government of the colony and the capital of the islands. In 1572, Legaspi died and was buried at the San Agustin Church in Intramuros. 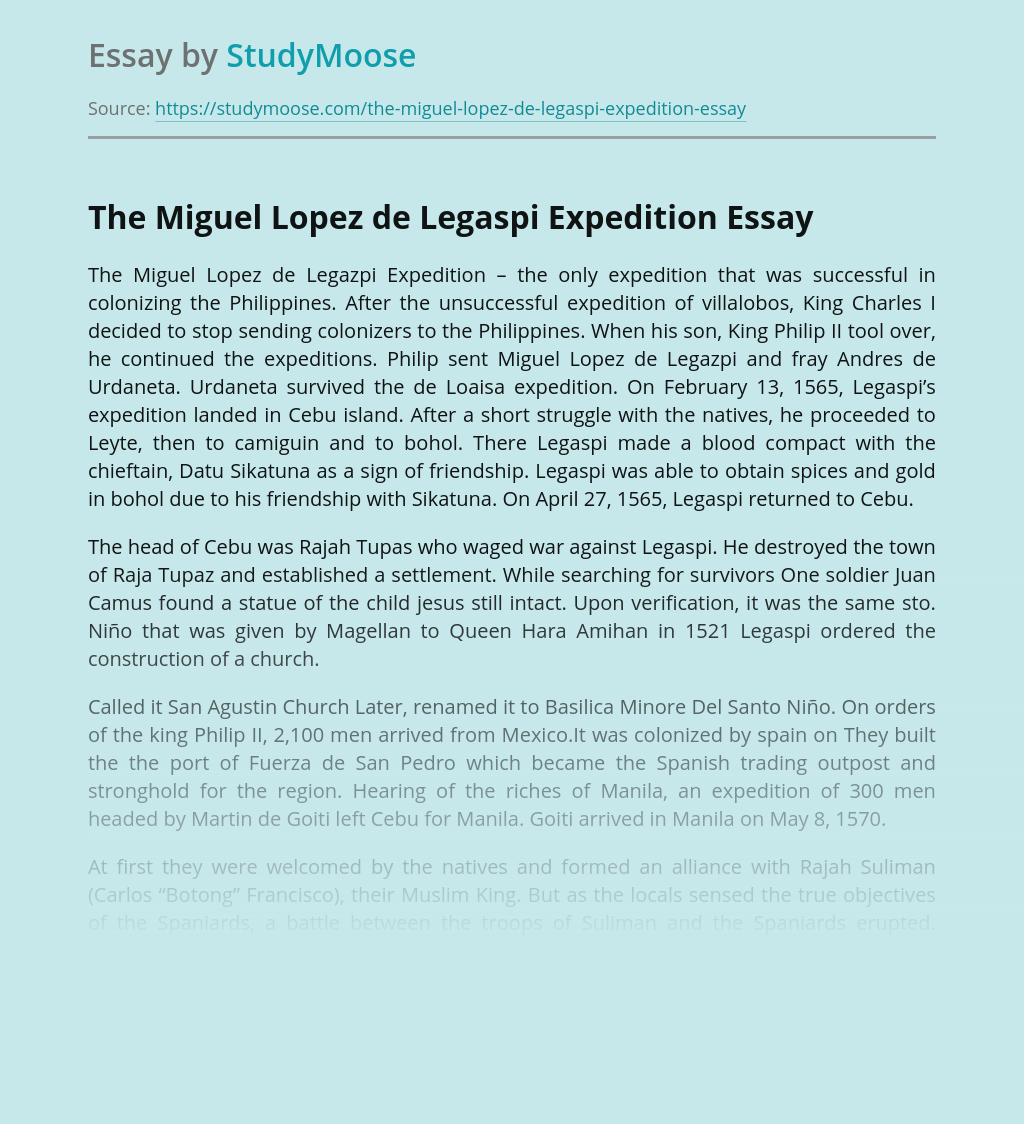 Don’t waste time
Get a verified writer to help you with Colonization by The Miguel Lopez de Legaspi Expedition
Hire verified writer
$35.80 for a 2-page paper
Stay Safe, Stay Original