(d) From Table 1.1, the actual volume of the volumetric flask was determined.

(a) A 50ml beaker was cleaned and dried then, accurately weighed using analytical balance.

Turn in your highest-quality paper
Get a qualified writer to help you with
“ Basic Laboratory Technique ”
Get high-quality paper
NEW! AI matching with writers

From Table 1.1, the actual volume for every addition of 5ml of distilled water was determined.

For the experiment of the calibration of burette, the results obtained are indefinite with the standard reading of burette.For the first reading which is 5ml, the last data obtained is 4.40ml. This data is not even close to the reading of the burette that had been fixed at the beginning of the experiment although it had been round off. This event occurred as there were some random error had been caused by the experimenters as they are not keep their eyes levelat the same level of the meniscus. There are maybe also caused by systemic error which is also the experimenters’ careless attitude as they are not checking the apparatus carefully whether it still can be use or not.

Thus, with the experiments made for the calibration of volumetric flask, pipette and burette, the experimenters had learn about the qualitative and quantitative aspect of this common laboratory equipment as they had measured and recorded the volume of these apparatus. These experiments also had taught and exposed them to the factor that had affected the accuracy of an experiments which are systemic errors and systemic errors that can occurred in any experiment if they do not take the precaution seriously.

Random error are statistical fluctuation in the measured data due to the precision limitations of the measurement device.This means your result is accurate but not precise. The only way to minimize random error is to repeat the experiment more times to get a better average.

Conical flask are also called Erlenmeyer flask. The primary use for Erlenmeyer flasks is in mixing chemicals. Because the sides of Erlenmeyer flasks are slanted and the mouth is narrow, mixing reagent liquids can be accomplished by swirling without fear of spilling the contents. The advantage of this type of flask is that special stirring equipment (such as a magnetic stirrer) is not needed. The volumes stamped on the side are approximate and accurate to within about 5%.

Graduated cylinders are useful for measuring liquid volumes to within about 1%. They are for general purpose use, but not for quantities analysis. Although not nearly as accurate as pipettes, graduated cylinders have an advantage in that they require much less technique to use. This allows for more reproducible results for those who are unfamiliar with proper laboratory techniques.

Basically, pipets are specially designed and calibrated glass tubes used for accurately transferring small volumes of solution (usually 50 mL or less) from one container to another. Pipets are available in a variety of types and sizes, for many different uses.

3. Explain how to read a burette. What are the factors to be considered when using a burette?

To read a burette, the experimenter must remember that the numbers starts at 0.00 on the top and go to 25.00 at the bottom. He must read the liquid level using the bottom of the meniscus which is a curved surfaces that existed at the top of the liquid level. 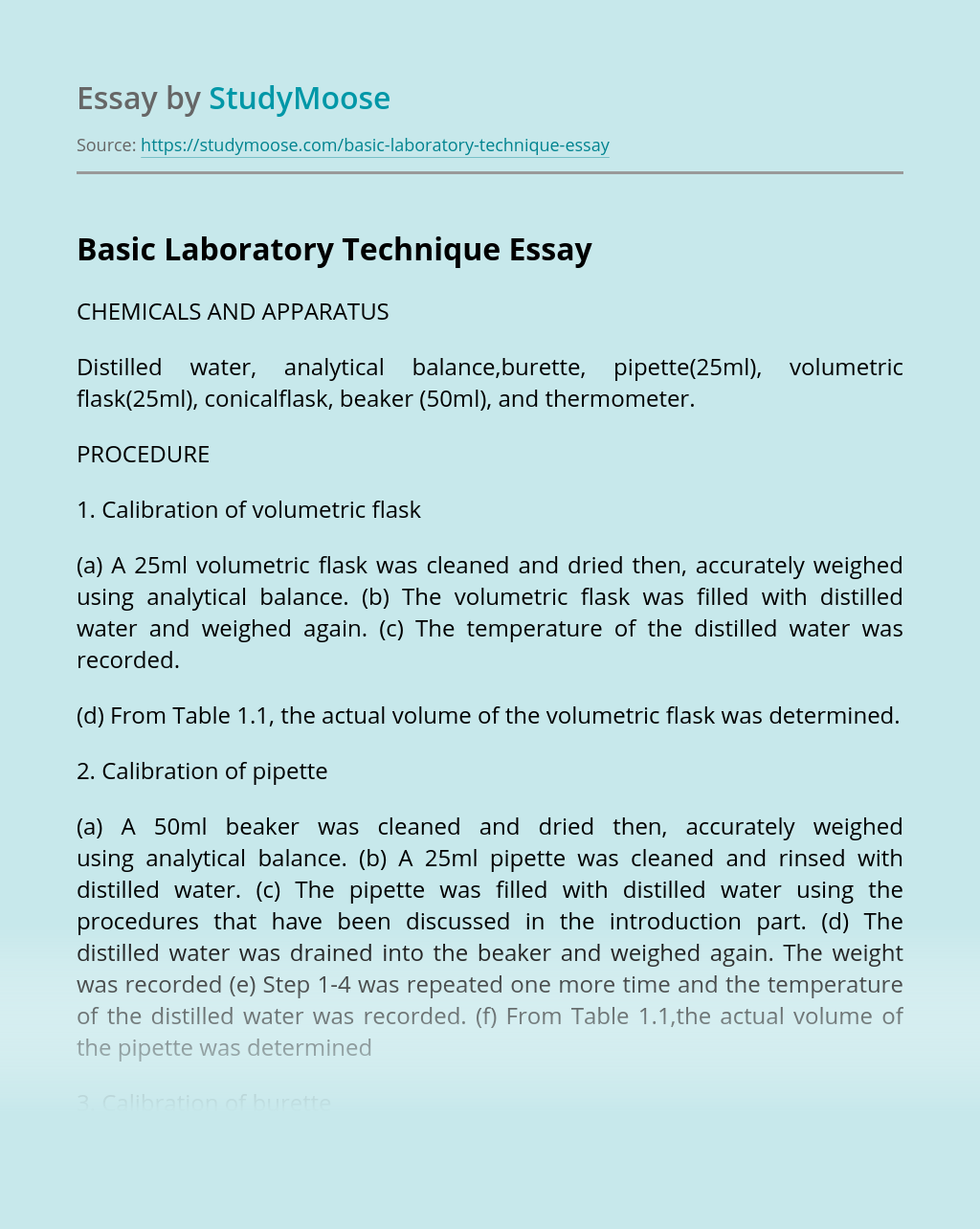 Turn in your highest-quality paper
Get a qualified writer to help you with
“ Basic Laboratory Technique ”
Get high-quality paper
Helping students since 2015
Stay Safe, Stay Original