Australian Bush Ballads have captured the essence of early Australian life. Bush Ballads do more than this they often deal with the hardships encountered living on the land as well as the people of the bush. The poetry of “Henry Lawson” and “Banjo Paterson” deal with these concepts. While Banjo Paterson defends and romanticises the bush in his many ballads for example “Clancy of the Overflow”, Henry Lawson provides a more balanced view of the bush in his poems, in particular “Up the Country.

Don't use plagiarized sources.
Get Your Custom Essay on Banjo Paterson’s Clancy of the Overflow and Henry Lawson’s Up the Country Just from $13,9/Page

Poem – Clancy of the overflow by Banjo Paterson

Topic sentence – “Clancy of the Overflow” is typical of an Australian Bush Ballad. In this poem, Clancy serves as the representation of what Australians should be like, which is wild, adventurous, pioneering, friendly and free.

Body – Paterson’s poem “Clancy of the overflow” criticises the dynamics of town life because it objects to the values the bush is based upon. For Paterson, these values included order, stagnation, narrowness of vision and unfriendliness.

Paterson feels as though these values will not create a better Australia.

Banjo Paterson romanticises about the Australian bush and in this poem he describes how wonderful and extravagant life in the bush is by using flowing and expressive language for example vision splendid, sunlit plains, wondrous glory and everlasting stars. An extract from his poem sums up the landscape of the bush, “In the murmur of the breezes and the river on its bars, and he sees the vision splendid of the sunlit plains extended, and at night the wondrous glory of the everlasting stars.” Banjo Paterson has created a flowing stanza of rhyme which depicts and portrays the awe of the Australian bush using imagery making the reader more involved in the story.

Clancy personifies Paterson’s vision of what the Australian should be. He is an individual who is a part of the historical evolution of Australia in touch with the traditions of life on the land. Paterson is celebrating this aspect of Australia and idealising the experience of the shearer and drover, in general.

Quote – “In the murmur of the breezes and the river on its bars, and he sees the vision splendid of the sunlit plains extended, and at night the wondrous glory of the everlasting stars.”

Poem – Up the Country by Henry Lawson

Topic sentence – “Up the Country” by “Henry Lawson” contrasts city and bush life but still conveys a balanced and descriptive perspective on what the bush and city are like.

Henry Lawson believed that an Australian identity must emanate from its own soil, not from the safe green fields of the mother country, Britain. This is why he took such a strong stance on the bush. The landscape in the poem “Up the Country” is described as being filled with “miles and miles of thirsty gutters” which is reflecting on the Australian landscape being affected by drought, and Isolation, for the thirsty gutters stretch for miles and miles. In this extract the reader is brought to the understanding that the bush is an isolated and harsh place.

Henry Lawson has written this poem in first person, so as to give his personal opinion of the bush. This can clearly be seen by the title, Up the Country. In this poem he has depicted and conveyed different alley ways into the world of the Australian bush, by using descriptive language he has shaped and given the reader an understanding of what life in the bush would really be like.

Banjo Paterson’s Clancy of the Overflow and Henry Lawson’s Up the Country. (2016, Mar 28). Retrieved from https://studymoose.com/banjo-patersons-clancy-of-the-overflow-and-henry-lawsons-up-the-country-essay 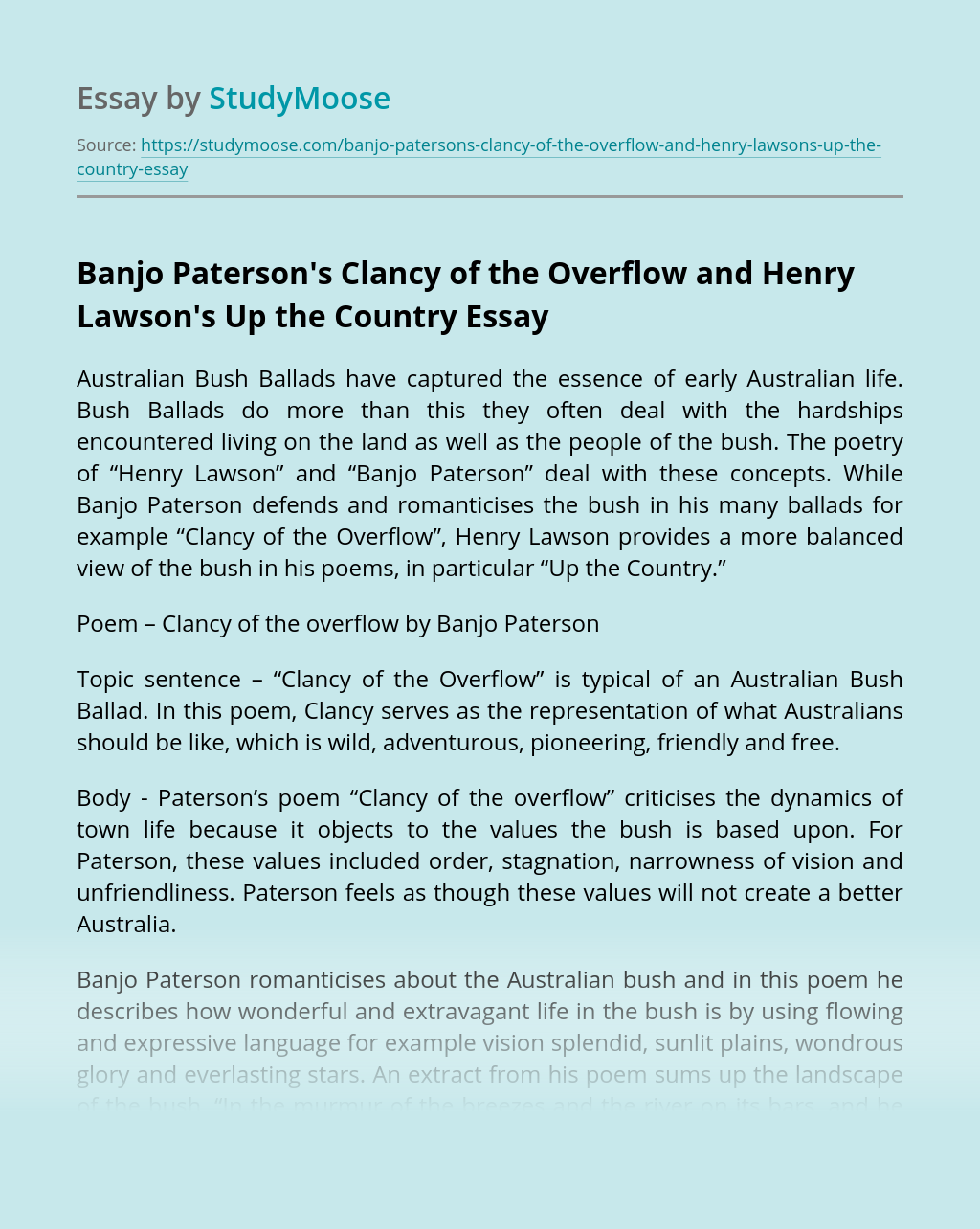 How to Write a Good Satire Essay

Rate this post Satire is a complicated but an engrossing genre of literature. If you don’t know how to write a satire essay and make it high-quality, don’t worry because even the greatest gurus of satirical writing Mark Twain, George Orwell, Charles Dickens considered that genre to be tricky. It requires not only attention to...

Rate this post Pericles’ Funeral Oration Why do we fight wars if they just cause death and sorrow This famous speech was written by Thucydides, but given by Pericles sometime during Athens’ Pelponnesian War. This kind of speech was generally given at a mass funeral, to honor many who had died fighting in the war....

Get Essay
IntroductionHigher education affects almost everyone - as

Rate this post Introduction Higher education affects almost everyone – as students, parents, part-timers and citizens or as candidates of scientific, medical, and technological research. A higher college education is coming ever closer to being considered so basic that, it is too important to be left to the differential competitive forces of the current survival...

Irena Sendler - Rescuer of the Children of Warsaw

Rate this post Imagine being trapped and injured just because of your religion. Every day your friends, family and neighbours are taken away to be killed. This was the life for Jewish people in World War 2 and Irena Sendler planned to stop it. Irena Sendler was a Christian born in Warsaw Poland in 1910....

Understand diversity, equality and inclusion in own are of responsibility

Rate this post 1.1 Explain models of practice that underpin equality, diversity and inclusion in own area of responsibility. Equality is to treat all as individuals; to respect race, disability, age, gender, religion, beliefs, culture and sexual orientation. For all to be open to opportunities, to be treated fairly and respectfully, have rights and equal...