A challenge for modern medicine

Antibiotic resistance is a serious matter which should be addressed seriously. Every time you take antibiotics you don’t need you increase your chance of contracting an infection that is caused by bacteria that are resistant to antibiotics. And if you get an infection that can’t be treated by antibiotics you run the risk of your infection getting considerably worse and you might need to be treated in hospital. There are many factors affecting as to how antibiotic resistance acquires but one thing is for sure, it must be stopped!

At present antibiotic resistant poses as a massive challenge for modern medicine.

Don't use plagiarized sources. Get your custom essay on
“ Antibiotic Resistance in Bacteria ”
Get custom paper
NEW! smart matching with writer

There is a wide variety of conditions that antibiotic resistance stands in the way of successful treatment like tuberculosis (TB) and Methicillin-resistant Staphylococcus aureus (MRSA).

New infections occur at a astonishing rate of one per second. The proportion of people who become sick with tuberculosis each year is stable or falling worldwide but, because of population growth, the absolute number of new cases is still increasing. Prevention relies on screening programs and vaccination.

Antibiotic resistance is a growing concern in multi-drug-resistant TB. In a scientific journal titled ” Tuberculosis resistant to isonazid and rifampin” published in 1993 it was concluded that patients with tuberculosis that is resistant to isonazid and rifampin often didn’t succomb to the best treatment available and that failure to obscure this reistance would end in high mortality rates and a gloomy reality for the public (Goble et al) .

In the case of Staphylococcus aureus where, like tuberculosis, it has grown resistance to it’s most of it’s treatment. Staphylococcus aureus is very difficult to treat if contracted due to its high resistance rate to a group of antibiotics called beta-lactams. This group of antibiotics includes penicillin, cephalosporins, tetracyclines, clindamycin and vancomycin.There are different treatments for different variations of the disease but treatment isnt straight forward due to the high rate of antibiotic resistance.

The actual way in which a bacteria strand becomes resistant is usually a mutation in a chromosomal gene of the pathogen. Whiles a organism is being treated by specific antibiotics, the antibiotics will have an effect on 99.99% bacteria but not the bacteria that have undergone mutation that prevents a certain antibiotic having an effect on these bacterial strands will reproduce and by the theory of natural selection predicts that under these circumstances, the fraction of the bacterial population carrying genes for antibiotic resistance will increase. For example, a mutation in one gene may stop or reduce the pathogen’s ability to transport a particular antibiotic into the cell. (Jane B. Reece).

There are quite a few practices effecting as to how bacteria strands become resistant to antibiotics. One would be the unnecessary prescribing of antibiotics from doctors to patients, but there is a lot to be said about this whether it be the patient feeling they are too sick to be told that they do not require the use of antibiotics even though they could just have a viral infection which antibiotics would be of no use to them unless it were to relief their pain or that they just want their moneys worth in antibiotics.

Another cause to do with the doctor patient relationship would be the fact that the doctor would be unsure of what to prescribe if need be or just how much to prescribe!

There is also this looming fear for doctors that the patient might wish to make a lawsuit against them for not taking action on their symptoms or not prescribing the right medication to them first time round and therefore doctors can be prescribing antibiotics out of fear of lawsuit.

Also, many practitioners who earn by means of selling medicines often prescribe more drugs than necessary for means of profit (Holloway 2000).

Another major factor that promotes bacteria to become antibiotic resistant is that when people do get prescribed the right medicine or antibiotics is that they don’t take the right amount each day. Some believe that it is better to take one antibiotic a day rather than two (Kardas P, March 2007) and others feel that it is ok to stop taking them when their symptoms have gone or that they will save them for the next time those symptoms occur. Its funny to actually hear that a third of people still believe that antibiotics are effective on the common cold (McNulty CA et al, August 2007).

Farmers feed their livestock antibiotics for numerous reasons but the fact is if and when their livestock build resistance to the antibiotics, they are then killed and processed into meats and other sources of food and they become our food. They may tell you your daily requirements for calories, vitamins, calcium, iron etc. but they do not tell you that your food could be the source of your illness or the reason why certain antibiotics will not have an effect on you! 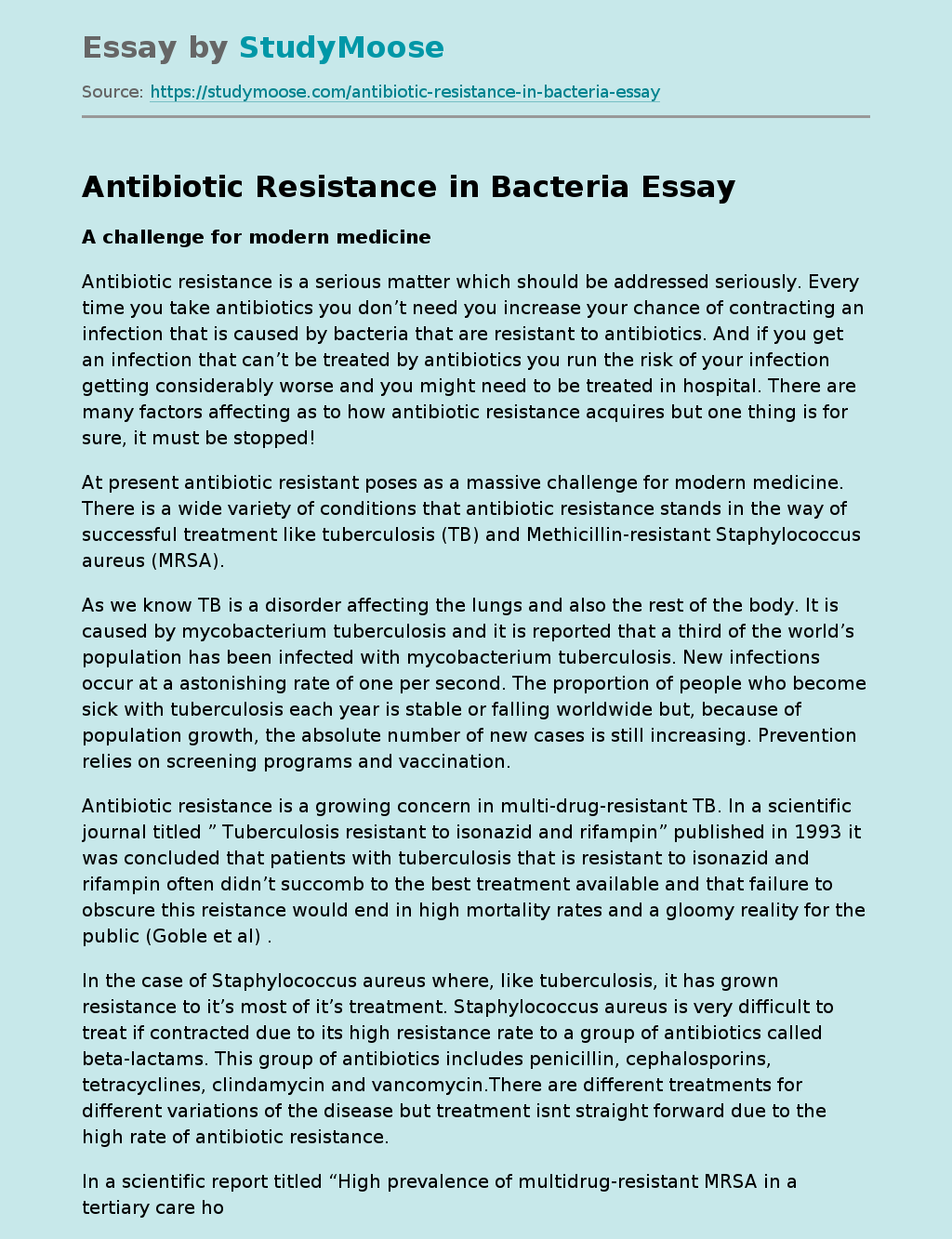