Don't use plagiarized sources.
Get Your Custom Essay on Antibiotic lab report Just from $13,9/Page

Although microorganisms can develop a resistance to these agents, the effectiveness depends on factors such as environmental conditions etc.

Since the effectiveness varies, if environmental factors and other conditions were kept the same, the antibiotic would be most effective.

Part A: Set up of Nutrient Agar plate
1. Get an agar plate and carefully turn it over (being careful to not open the dish)
2. Draw two lines (forming right angles) to separate the dish into quarters. Number the quadrants 1-4 on the edges only (see figure 1). Turn the dish back up. DO NOT SPILL.
3. Insert inoculating loop by lifting top lid slightly (at an angle).
4. Swipe the loop over the bacteria culture. DO NOT DIG INTO CULTURE.
5. Slightly open nutrient agar plate and place tip of inoculating loop on the top center of agar and steak the agar (see figure 2). Turn dish 90o and repeat. Immediately dispose loop

Part B: Placement of Antimicrobials
1. Select three antimicrobials
2. Slightly open inoculated agar plate. Place a disk in the center of one of the quadrants using forceps gently until it sticks and then close petri dish.
3. Repeat step two with the disks of the other two antimicrobials. Place an empty disk in the remaining quadrant (control).
4. Tape the petri dish to secure tightly.

Part C: Results
1. Observe the dish after 48 hours
2. Measure the area clear of bacteria (the clear area is the zone of inhabitance) using a metric ruler.
3. Record results and return the dish to teacher for proper disposal. It is important not to open the sterile agar plates so that the bacteria don’t spill and avoid contamination. Its important to only write on the edges of the plate so that it is easy to see the areas needed for observation It is important to use sterile techniques while inoculating the agar plates so that bacteria don’t get on anything nor are added in the experiment. Control disks are used in order to have a basis for comparison. It is important to tape the dish in order to avoid spills and contamination of objects by the bacteria.

Analysis: we used a control disk in order to base the results on something in order to compare the effectiveness of the antimicrobials. Without the control, we would have no basis for comparison. The antibiotics did not do as good of a job as expected because they need to be continuously taken for a set period of time. Due to this reason, doctors subscribe antibiotics for 10 days and if use is stopped before that period, they can easily divide and multiply. The school bathroom soap showed the best results because it had the most amount of clear area. The use of a control showed that the inhabitance of bacteria observed was due to the antibiotic on the disk rather than the disk itself. If a serious staphylococcus infection developed in the locker room of the school gym and I were in charge, I would take a sample of the bacteria and repeat this experiment in order to find the most effective disinfectant.

I think that antibiotics seem to lose their effectiveness against a particular population of bacteria after a prolonged period of time because they adapt to the change and mutate overtime. It is important to take an antibiotic for the exact period of time it is prescribed because the bacteria could be dormant and if not completely killed, they can easily reproduce and make the person ill again. If I were infected with E-coli I would want to be prescribed a stronger antibiotic than erythromycin because it did not give the best result in the experiment.

Discussion: All antimicrobials used inhibited the growth of the bacteria to some extent however the school bathroom soap showed the best results and inhibited growth to the furthest extent, which rejected my hypothesis. Although it did inhibit growth better than others, it wasn’t as effective as the school bathroom soap. I thought the antibiotic would work best, as it’s the most common used antimicrobial in hospitals however because it was only used once, it was quite ineffective. The hand sanitizer was least effective as it barely inhibited growth. In the end the hand sanitizer and antibiotic disks were both semi cloudy whereas the bathroom soap was clear. In conclusion the bathroom soap worked much better than I expected and I would surely use it before and after lunch in order to avoid being infected. 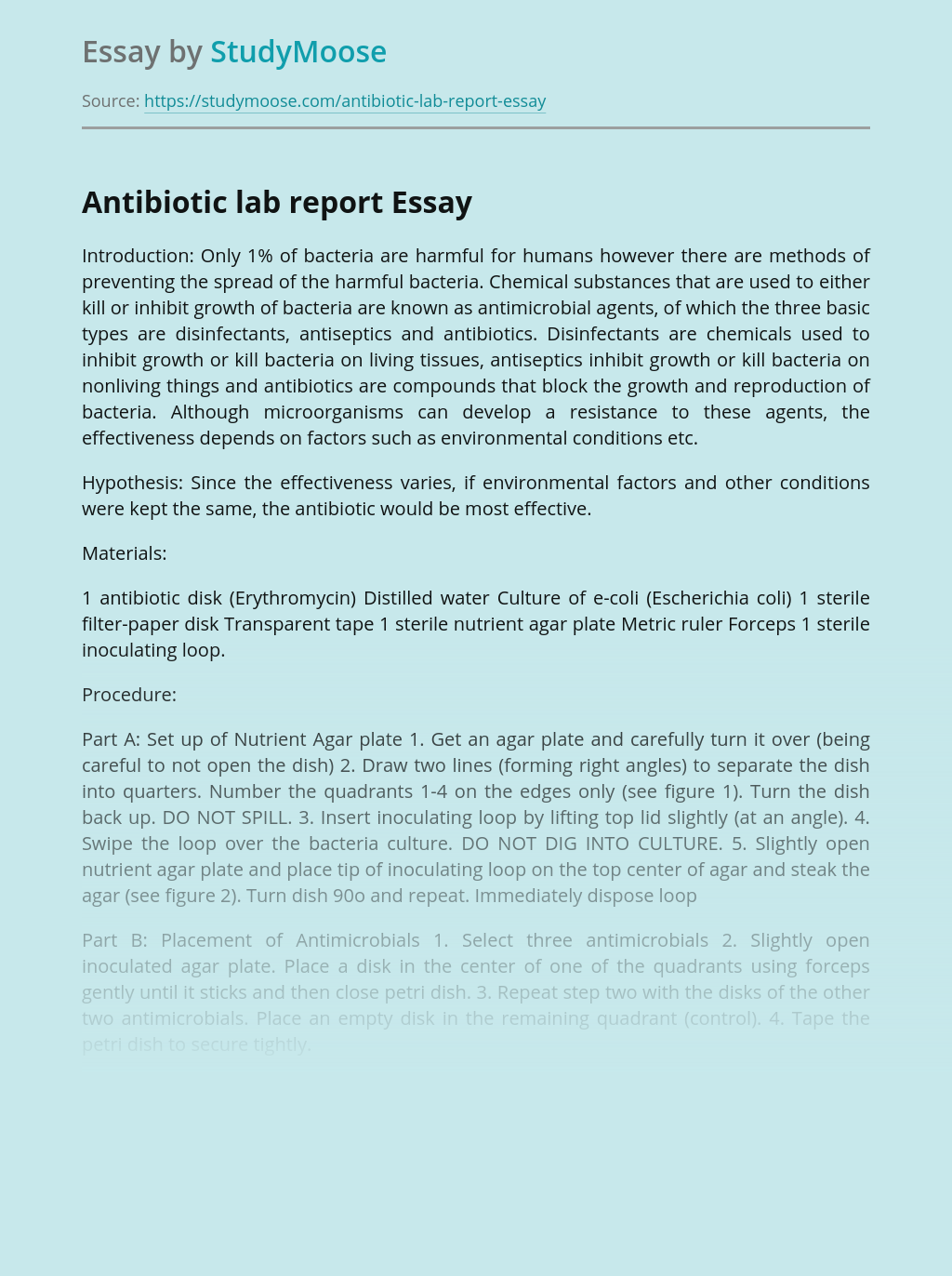 Rate this post Forty-three visits to twenty-one different restaurants show bacteria on an item we often request (and sometimes don’t) to garnish our water, soda, tea or alcoholic beverages. The study conducted, investigated whether lemon slices used in restaurants as drink garnishes contain microbial contamination that may be ingested by restaurant patrons. Seventy-six lemons were...

Rate this post There are numerous reasons for identifying unknown bacteria. Some of these organisms have distinct qualities that set them apart from one another, such as the exposure to certain environments. Through out the semester in the laboratory, we are able to encounter some of the few microorganisms that we as humans have come...

Get Essay
The History of Microbiology

Rate this post I. Introduction. Microbiology is the study of living microorganisms. The term micro means extremely small, and with regards to biology, this refers to minute living things that are individually too small to be seen without the aid of a microscope. These invisible microorganisms include bacteria, virus, fungi, protozoan and other microscopic organisms....

Difference between an obligate and facultative aerobe

Rate this post The genus Proteus, according to Bergey’s Manual of Determinative Bacteriology, is a group of straight rod Gram negative bacteria around 0.4-0.8 μm in diameter and 1-3 μm in length. In the microscopic test done, it was seen that the unknown culture contained rods that are on the shorter side, thus was identified...