Zombie land is a 2009 Science Fiction/Adventure film Directed by Ruben Fliescher and written by the talented Rhett Reese, Paul Wermick and David Callaham. The 1 hour 30 film follows the life of Columbus, played by the beloved Jesse Eisenberg, a shy student who is trying to reach his family in Ohio after a mad cow, zombie-filled disease spreads across America. Now Columbus isn’t our every day, buff as hell zombie killing machine. Columbus is more of our everyday nerdy, gamer, who struggles to not only to interact with the opposite sex but struggles even more with taking care of the thousands of undead, wanting to tear him limb from limb.

Don't use plagiarized sources. Get your custom essay on
“ Zombieland (2009) by Ruben Fliescher ”
Get custom paper
NEW! smart matching with writer

Throughout the story we meet his newly loved crew, starting with Tallahassee, a bloodthirsty zombie killing, Twinkie lover who dedicates most of his time throughout the film trying to get his hands on the last twinkie shipment in the states, then there is Little Rock and Witchata, 2 sisters who have been left to take care of each other by doing WHATEVER is necessary for survival, then there is the thousands of dead individuals who make up the terrifying yet humours zombies.

The call to action for Columbus comes as his Neighbour as we know her as, 406 comes to Colobus’s room asking for shelter as a crazy man had been following her and tried to bite her, hours later after waking up from a nap with her on the couch he realizes she’s sick. Now with sticking to his rules of survival, Columbus does what he does best.

In this video essay ill be discussing how through the film forms of misc en scene, narrative, genre and editing, the subtexts of fear of change is achieved. A good place to start in my opinion is the begging of the film, now as you watch the beginning of this title sequence think about how the edit flows, now for me this opening scene is a stand out both in editing form and a strong way of showing the strict rules of our main character. There is a strong distorted screen affect at the start which kind of distorts our vision and gives off an unsafe feeling, telling the audience that something is not right. Now as we see the intro fold out we can see that most of these shots are editing together to seem that every shot is in fact happening all with the same camera, so cuts to other scenes, odd flashbacks, it seems to flow at a continues rate even by zooming out of the destroyed world and then zooming back in. The main form of editing in this title sequence is the fact all shots are in slow motion, this helps with really showing the gore effects of blood, guts and zombies hitting the floors, walls and windows. The choice for this is to really focus on the beauty of the scene, kind of showing “How beautiful” but horrifying this world really is by slowly fading in and out of each other and then finally settling to a darkness, possibly death.

Now a big aspect of the film is that the titles are a consistent theme throughout, as they are always used to help create Columbus’ list of rules. These titles are almost entirely 3D, looking very realistic and usually interacting with the scene in some way, for both Columbus’s Rule 1: Cardio and Rule 2: The Double Tap, where after being shot, blood splatters onto the title. Within the main title sequence, we can see that all cast and director fonts are capital letter texts with a strong red sans-serif font. The strong fonts and the size of the titles really signifies how powerful and overwhelming the zombie apocalypse really is on the people and wouldn’t make much sense to have big bubbly text filling the screen. Most of these titles within the opening scene as well as through movie are in some way interacting with its surroundings in some way, that being pushed over, ran into or even broken by passing zombies. When the Zombieland title appears, it shows us someone trying to escape from zombies, smashing through a window of a car and the title with a crowbar.

Now how has a narrative been established, well from the get-go of Zombieland we are pushed to believe the film isn’t about a single male fighting the world alone to save every human and win America back, but more about the life of everyday apocalyptic survivor, scared, alone and smart. Now If you had to sum the story up in one word, it would be Rules.

As the subtext of the film is about Columbus’s fear of going against his rules, and his fear of change the story helps us keep this in the back of our mind by using the constant checklist or rule list titles popping up in nearly every action scene or scene where an important decision is to be made. For example, in the scene where Columbus meets Tallahassee for the first time, he checks the back seat of Tallahassee’s car before settling in, drawing a clear picture of the strict “to the books lifestyle” Columbus lives. Now through the film’s Mise en scene it is clear to see why Columbus fears stepping away from his list. Multiple locations are shown throughout the film from Washington DC, to an American university football field, to a strip club and even the toilets, and in every single one of them has zombies attacking. This signifies that nowhere is safe, not even when you feel most comfortable because that’s when you’re also most vulnerable, and therefor become a “human happy meal”. This can create a sense of unease for the audience, as most of these locations’ mise-en-scene represents its surrounding’s destroyed or burnt to the ground showing the audience the mayhem these zombies have caused and implies there is no safe haven and the only option is to always be on the run. Throughout Columbus’s adventures there is a mix between daytime and night-time scenes, but no matter the time of day, most shots are of low-key lighting. Low-key lighting and night-time shots are conventional of the horror genre as it establishes a sinister feel for the audience, making us have an uneasy vibe throughout.

Cinematography and Sound play a strong part of portraying meaning and forming subtext in Zombieland. As Zombieland follows the world of the undead, having the right sound affects and music is crucial. Zombieland has chosen to use over the top sound for their scenes, just as Tarantino uses over the top sounds to emphasise an action scene, Zombieland used its music to really bring out the adrenaline within the scene. There are additional soundtracks playing in the background of most scenes like Tallahassee rollercoaster scene or the music change in the supermarket once a zombie is in shot. Another great example of sound is the main soundtrack for the opening scene which is “For Whom the Bell Tolls” by Metallica, accompanied by ambient church bells throughout the song symbolizing that “your time has come”. Another great example of strong cinematography and sound is this supermarket scene, which for anyone would be a insanely scary and intense moment, but with the collaboration of the heavy metal music and quick montage editing it works together to help see that Tallahassee is enjoying this moment and the genre of comedy and horror work incredibly well.

Now as the film comes to an end, we start to see that everything kind of happened for a reason. Columbus realises after spending so much time with his group that some rules are meant to be broken if the time is right, and that change isn’t always a bad thing, in some cases its natural. Each scene is laid perfectly so we can watch Columbus push away change on many occasions, until it traps him with no place to run. Thank you for taking the time to listen to my presentation, and hopefully, you have taken something from this piece, enjoy. 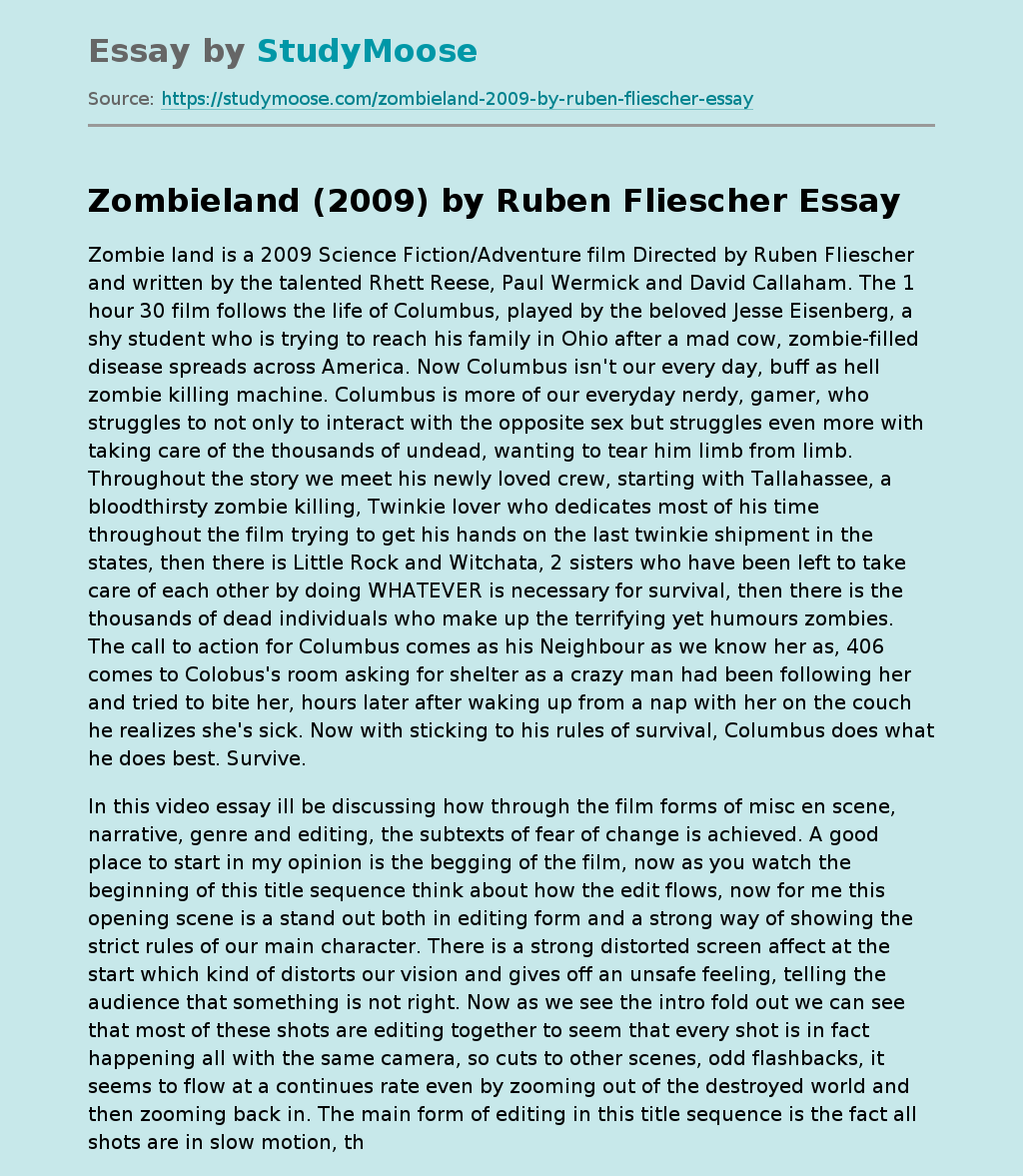