W.O. Lucy, the plaintiff, filed suit against A.H. and Ida Zehmer, the defendants, to compel the Zehmers to transfer title of their property known as Ferguson Farm to the Lucys for 50,000$ as the Zehmers ad allegedly agreed to do. The families had known each other for many years and the Lucys had tried to buy the facility countless times, but to no appeal. After a night of drinking and badgering, W.O. Lucy was able to entice Zehmer into writing up an agreement that stated Zehmer would sell Ferguson Farm to Lucy for 50,000$.

Don't use plagiarized sources. Get your custom essay on
“ Zehmer Case: Supreme Court of Appeals of Virginia ”
Get custom paper
NEW! smart matching with writer

Later, Lucy sued Zehmer to compel him to go through with the sale. Zehmers argument centered on him being drunk and that the agreement was in jest hence the agreement was unenforceable. The trial court agreed with Zehmer, Lucy appealed.

If a contract is signed by both the defendant and plaintiff parties, would the contract be considered unenforceable if one of the parties considers the writings in jest?

No. The Supreme Court of Appeals of Virginia reversed the rulings of the lower court saying that the writing was an enforceable contract.

The court acknowledged that the writing was a contract. The fact that it was under consideration for forty or more minutes before it was signed. The fact that Lucy objected to the first write up because it was written in the singular; the discussion as to what was to be included in the sale, the provision for the examination of the title, the completeness of the instrument that was executed.

The taking possession of it by Lucy without request or suggestion by either defendant that he give it back, are facts that show that the execution of the contract was a serious business transaction rather than a casual one.

Basis Technology Corporation, the plaintiff, filed suit against Amazon.com, Inc. The plaintiff company was responsible for creating software and provided technical service for Amazons Japanese-Language Website. Their agreement allowed for separately negotiated contracts so that the plaintiff company could provide additional services for Amazon. In 1999, the two entities entered into stock purchase agreements. Amazon later objected to securities that Basis sold. Basis sued for various claims including the securities and for failing to pay for additional services Basis provided that weren’t in the original agreement.

During trial, it seemed as if the parties had settled based off a series of e-mails but Amazon reneged and the trial judge ruled against Amazon, which then appealed.

Can a settlement be reached, and then be broken by only one party even if the two parties were bounded by such a settlement?

Yes. The Appeals Court of Massachusetts affirmed the trial courts finding that Amazon intended to be bound by the terms of the March e-mail. It constituted a complete and unambiguous statement of the parties’ desire to be bound by the settlement terms. 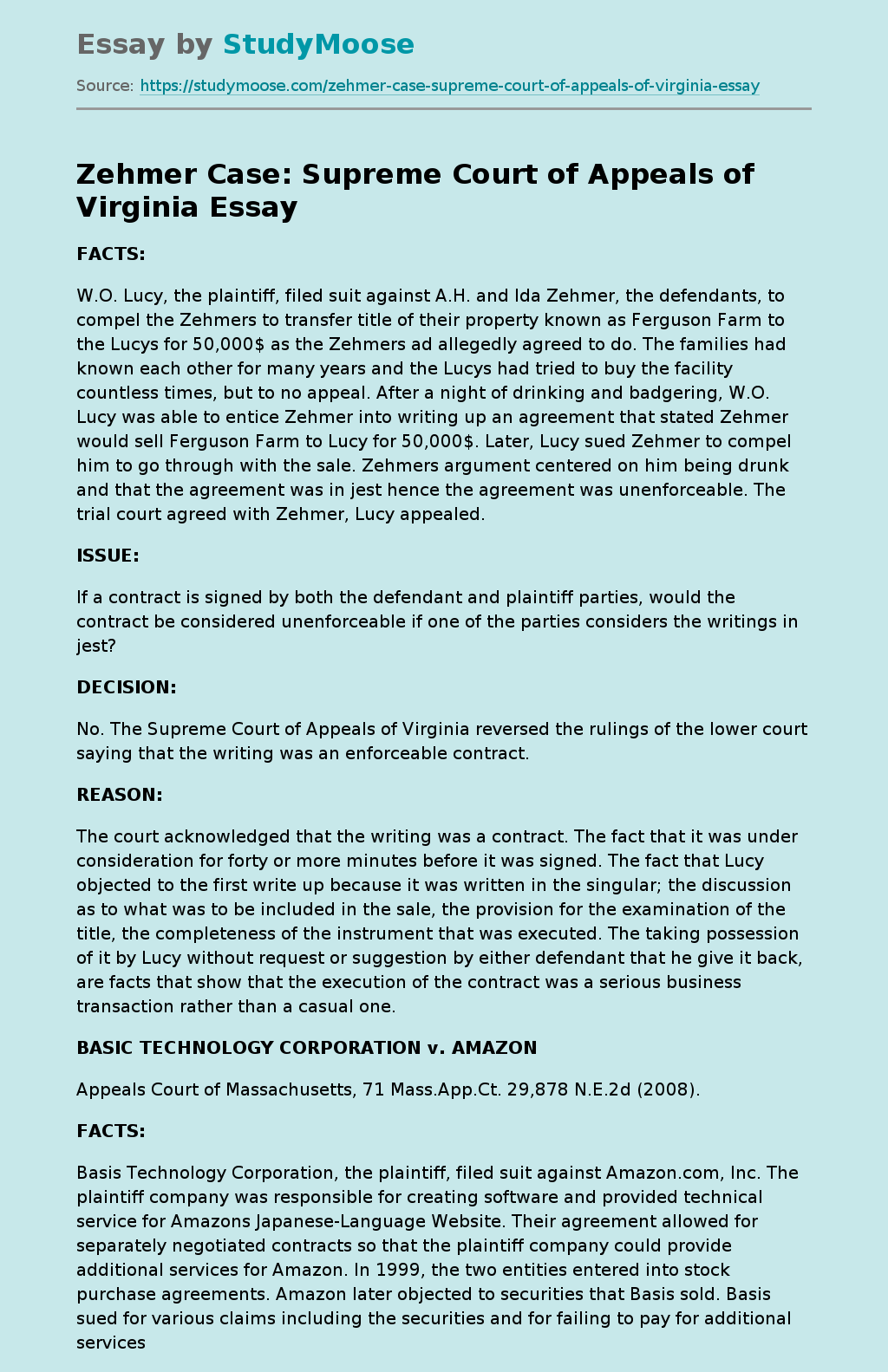