Don't use plagiarized sources.
Get Your Custom Essay on Zack Just from $13,9/Page

”You never took music in school.

Just to be contrary” (pg 185) because Etta never questioned Zack about her suspicion, she was unable to learn the truth. Another example would be when Zack realises what his mother had inferred from his behaviour. “She had concluded that I had avoided studying music to spite her. ” (pg 186) The miscommunication between Zack and Etta created a poor relationship between the two. When Etta finally expresses her thoughts to Zack he explains the truth behind his decisions, strengthening their bond as a whole.

Etta and Lucas’s lack of communication severed all ties between them as neither understood the feelings of the other. Lucas fails to write to Etta, believing a letter would not be enough; however, he lacked the courage to see her in-person. “You didn’t want to know… ” “I sat down a dozen times to write” (pg 209). Lucas is unable to convey his feelings to his daughter, leaving their relationship as it stood, non-existent. Finally seeing his grandson gave Lucas the courage to see Etta allowing him the opportunity to apologise to not only Etta, but Thom and Zack as well.

Similarly, when Lucas fails to explain the reasoning behind his cruel words just after Etta had first told him of her relationship with Thom. “You said all you had to long ago. ” (pg 210) The lack of communication between Lucas and Etta left their problem unresolved. Had Lucas explained the reasoning behind his hatred for whites sooner, perhaps the family could have helped him overcome such prejudice. At the end of the story, when Lucas finally confronts Etta, the author portrays the first steps to the establishment of a new relationship between the family.

Communication is the key to any relationship, as it generates trust, understanding and in this case, forgiveness. Etta hides her side of the family from Zack which encourages him to pursue these relatives, secretly. Etta’s evasion of Zack’s questions aroused a strong suspicion in his mind. “Go on out and play, Mr. Nosey. Mom has work to do” (pg 29) Zack hopes to discover the secrets of his mother’s family, however, in fear of prevention, embarks alone. The secret between Zack and his mother created a barrier between them.

This lack of communication encourages Zack to lie and deceive both his parents and grandparents in order to discover “who he is”. Also, Zack hopes to prevent his mother from realising his plans, in order to ensure she does not stop him. “But I couldn’t tell my parents. ” (Bell 65) The lack of communication between Zack and Etta created mistrust between the two. Etta’s refusal to reveal her “family secret” generated a strong curiosity in Zack, eventually leading to his journey. Had Etta told Zack the situation, he might have considered telling her his plans, if he had even made them at all.

On his journey, Zack faced several hardships that could have been prevented had either of the two thought to allow the other in on their “secret”. Lack of communication led to preventable lies and conflict. Deficient communication results in negative consequences. Etta’s lack of communication with Zack led her to believe his avoidance of music was to spite her. As a result of Lucas’s evasion, the problem with Etta is not resolved. Etta’s refusal to inform Zack of his grandfather’s abandonment encourages him to pursue the mystery secretly. Someone who communicates is able to generate a clear understanding of what is going on around them.

This enables the person to enhance their relationship with others. Etta confronted Zack about his reasoning behind leaving music, proving her assumption false. Zack understood why Etta hid her side of the family and was able to have a discussion with her about it. Lucas finally confronted Etta and re-establishes their relationship. These events may enable them to remember communication is essential in any relationship. When people understand one another through communication, bonds are forged. The more we communicate, the stronger these bonds grow. Communication is the base of all relationships. 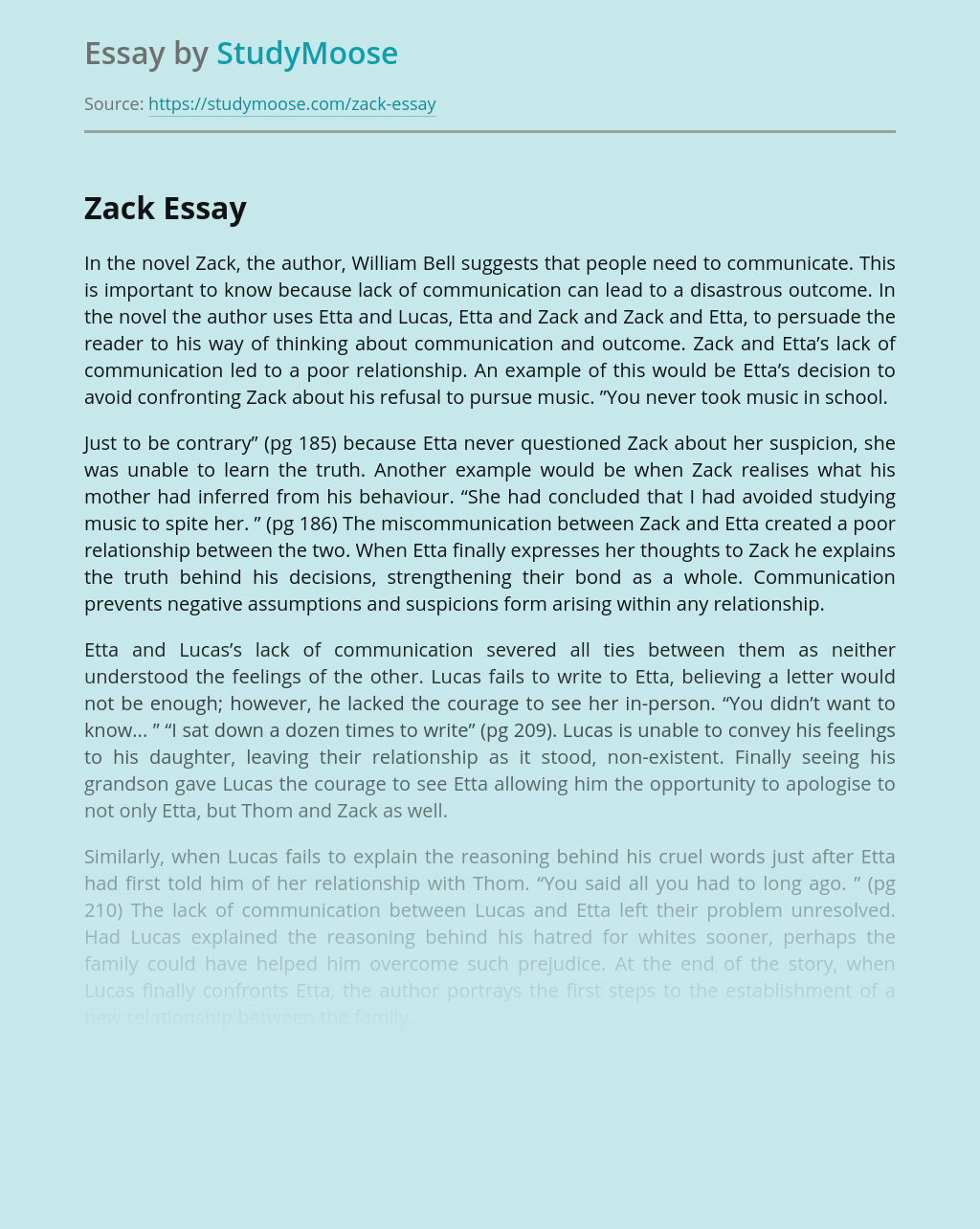 Murder mystery tales are among the most popular book genre. Murder mysteries will usually consist of an unknown murder that killed a significant character. The detective has to decide among many suspects with clues he or she found in the course of the book. Authors typically write books of this genre because they give the... VIEW ESSAY

When a person has watched a film, advertisement or read a book, there are distinct elements that are evident throughout the work of art that seemingly communicate more than their surface meaning. This essay seeks to demonstrate how metaphor, connotation and metonym are usually used in distinct cultural texts such as in books, film and... VIEW ESSAY

View sample
The Two Parts of To Kill a Mockingbird

When an author divides a novel into two separate parts he or she does it purposely to show either a large dynamic change in a character or little to no change at all. Harper Lee, author of the novel To Kill a Mockingbird, separates her novel into Part I and Part II. Part I is... VIEW ESSAY

View sample
The Fate of a Hero: Ironman The Modern Hero

Stories of heroes have actually been informed, composed, and passed down given that the beginning of time; each special however following a tight pattern. Joseph Campbell was the very first to observe this and wrote a book called The Hero With A Thousand Deals with. Campbell discussed the resemblances of every hero’s journey while simplifying... VIEW ESSAY