Categories: ExistentialismPhilosophy
Download paper
Download
Essay, Pages 6 (1271 words)
Views
851
Existence precedes and commands Essence. (Jean Paul Sartre) We regarded any situation as raw material for our joint efforts and not as a factor conditioning them: we imagined ourselves to be wholly independent agents. … We had no external limitations, no overriding authority, no imposed pattern of existence, we created our own links with the world, and freedom was the very essence of our existence. (Simone de Beauvoir, 1963). Many people believe that freedom is something that you are given when you are born, and that you can do whatever you want.
Turn in your highest-quality paper
Get a qualified writer to help you with
“ Your True Self ”
Get high-quality paper
NEW! AI matching with writers

Most don’t relies that the people around them can affect the things they do. They chose not to believe it. Some think that if they are not in with the in crowd then they are inferior to society so they act deferent and that became how they are. If you striped yourself form all that defends you then that becomes your true self. Existentialism believes that the individual should break away from society’s trappings.

Two existential stories, The Stranger and The Truman Show, involve the themes of existentialism in their plots to send their protagonist through the journey of finding existential freedom.

In the Stranger, the protagonist, Meursault, kills an Arab because of the sun and is convicted to be beheaded. In the Truman Show, Truman, lives his life in a fake world for the purpose of a live television show without his knowledge. His journey begins when he starts to realize not everything is what it seems. Meursault and Truman both go experience existential alienation and nothingness; they both strive for freedom authentic to their existence.

As the plot develops in both stories, Meursault and Truman experience existential alienation in opposite forms.

During Meursault trail for killing an Arab men it didn’t seem as if it was his trial. He had no say, to what happen it was more like what to say and do. He starts feeling alienated from his own defense. He has no say in the matter because his views are different from his lawyer, magistrate, jury, and the audience in the courtroom. “Everything was happening without my participation. My fate was being decided without anyone so much as asking my opinion” (Camus 98). This, although, contrasts from Truman’s observation in The Truman Show he is born to a life that is all set up to what would bring the audience attention.

Not what brings him happens. After seeing the absurdities in his life, he starts to conclude that nothing in his life is what it seems. Once he starts realizing everything is fake, Truman starts alienating himself from everyone by spending more time in the basement. The basement symbolizes himself away from everything and everyone that tries to define him. That is also were he go when something is wrong. He can live he is trapped in the make believe prefect world. After feeling alienation from their lives, Meursault and Truman started to transform into nothing.

As Meursault is sitting alone in his sale with not to do he felt good. He had his memories and that took time away. He knew what he did and what was going to be his ultimate faith. “It was as if I had waited all this time for this moment and for the first light of this dawn to be vindicated. Nothing, nothing mattered, and I knew why” (121). After the long days in trail, Meursault strips away everything he that matter from that past and the current. Nothing mattered anymore. The people thought of him and the fear they had to reception someone different.

Truman’s experience with nothingness took a more physical toll as everything was stripped from him. With every with each beating wave crashing onto Truman in the storm all made by Christof he symbolize Christ in that he controls people’s lives and ties to define their faith. As he is doing this to Truman when he tries to make him come back. Truman is detriment to find his ultimate existential freedom that is authentic to his existence. As Truman was reaching closer and closer to nothingness Christof challenged the storm At this point, Truman did not care if he lived or died.

Nothing mattered anymore. He wanted to be free and if dying was his only way out, he was fully prepared to accept it. The waves stripped him of his former reality as he fights to be in a real one. After reaching existential alienation and nothingness, Meursault arrived to existential freedom towards the end of his life. Knowing that his freedom was no longer control by him and that it would soon come to an end. He could help to want to be free and want to live. It is a natural desire to want to live.

He knows what he did and how that one action is shaping his live for the good and bad. “What really counted was the possibility of escape, a leap to freedom, out of the implacable ritual, a wild run for it that would give whatever chance for hope there was” (109). He is reaching existential freedom because he will soon accept it all and find freedom in his state of mind instead of state of physically being.

Meursault reaches existential freedom when he says, “As if that blind rage had washed me clean, rid me of hope; for the first time, in hat night alive with signs and stars, I opened myself to the gentle indifference of the world. Finding it so much like myself—so like a brother, really—I felt that I had been happy and that I was happy again” (122). he untimely finds it because he accepts his faith to death and instead of think of the bad he find the good and that makes him happy. Along with Meursault’s freedom, Truman reaches his own existential freedom. After the storm ended and cristof finely let go Truman. He smoothly sails, enjoying the sun at his face and the fresh sea air.

He has survived the storm and reached the stage of nothingness. His mind is free from all the inner turmoil he has encountered since the realization of all the absurdities in his life. He is finally going to find the one person that every seemed real to him and that was Sylvia. As he was sailing to Fiji it was cut short when he crashed into the end of the set. He sees the stairs to freedom that symbolizes The Stair way to heaven. Before he lives Cristof tries to convince Truman to stay.

Cristof says, “Truman, there’s no more truth out there than in the world I created for you – the same lies and deceit. But in my world you have nothing to fear. Say something, damn it! You’re still on camera, live to the world…! ”, “In case I don’t see you–good afternoon, good evening and good night” responds Truman. Truman has now reached freedom authentic to his existence. Something that he truly always had but never got express. Through existential alienation and nothingness, Meursault and Truman reach existential freedom.

Meursault and Truman experienced their own authentic alienation and nothingness. Meursault when he was in the court room and everyone alienation him for being different. And Truman alienation himself from everyone around to find his trues self. They both took different path into finding their ultimate authentic to their existence but maybe that is what we all need to do. Existential is like a caterpillar transforming into a butterfly to find its authentic beauty that is different from every other butterfly that will untimely define freedom. 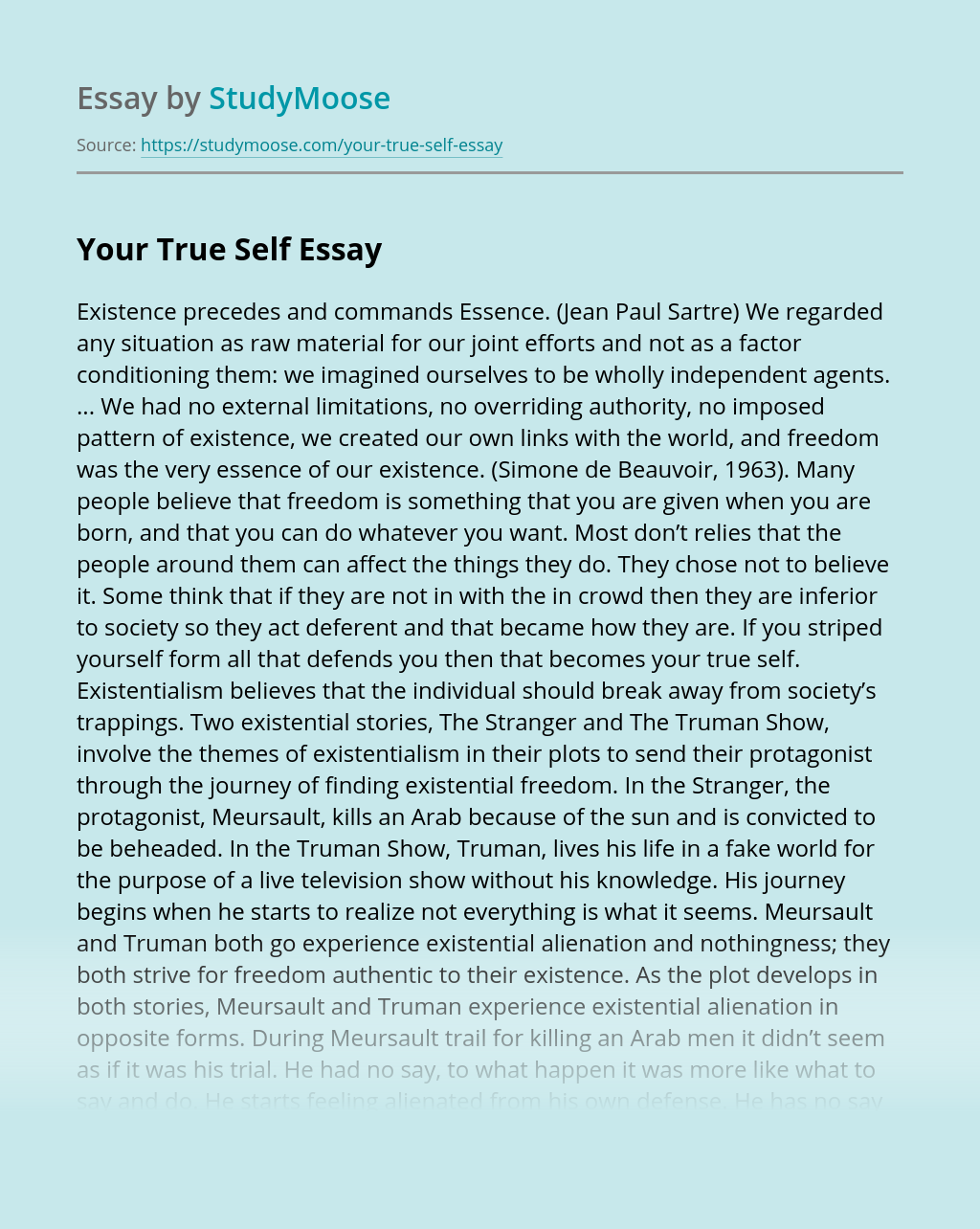 Turn in your highest-quality paper
Get a qualified writer to help you with
“ Your True Self ”
Get high-quality paper
Helping students since 2015
Stay Safe, Stay Original