In 1620, pilgrims from England boarded the Mayflower to come to America to have freedom.The freedom they wanted was the freedom of religion. One question asked by many Americans today is, “Even though we are stated as a free country, are we totally Free?” Three of the most effective tools for keeping freedom for our country are the legal system, Compromise, and the Bill of Rights. They help guarantee our freedom as a country.

Benjamin Franklin was one of the Forefathers of America.

Don't use plagiarized sources. Get your custom essay on
“ Your Freedom, My Freedom, Our Freedom ”
Get custom paper
NEW! smart matching with writer

One of the most famous speeches by him was the Speech in the Convention. In this speech, the deal of compromise was discussed. Compromise is when two or more people give something up in a disagreement to come to an agreement. To compromise, Benjamin Franklin stated in the “Speech of the Convention” that,” “… every member of the convention who may still have objections to it… doubt a little of his own infallibility, and, to make manifest our unanimity…” (Franklin).

Even though Franklin and the other men might have disagreed on points of views on how things should go, Franklin was ready to accept what the others had to say, and compromise with them to find a common ground. Some might argue that compromise isn’t always the safest way to go. The beliefs some have could be dangerous and cause harm to others.Though compromise might not be the safest way for two people to agree on something, everyone has the right to input their ideas and thoughts into a discussion to make a compromise.

Another tool used to preserve our freedom is the Bill of Rights. The Bill of rights was written in 1789 by James Madison, but was implemented in 1791 (Admin). The Amendments in the Bill of Rights gives us our freedom of speech, religion, and the right to bare arms, etc. One example from the “ Bill of Rights” that explains our rights is,“…make no law respecting an establishment of religion, or prohibiting the free exercise thereof, or abridging the freedom of speech, or of the press…and to petition…”( Madison). This quote points out that people have the right to practice the religion they choose to, have the right to exercise their freedom of speech, and can appeal to authority with respect to a particular cause. Some might say,” Freedom of speech can cause loss of faith in authority and lead to widespread rebellion and outright civil war (Quora).” Though some say that the first amendment can cause “outright civil war”, the main reason people came over from England to the United States was for the right to choose your religion, speak against the government, and petition things you don’t agree with. Everyone has these Unalienable rights to utilize.

My final tool I believe preserves our freedom is The Legal System. “A legal system is a mechanism for creating, interpreting, and enforcing laws in a given jurisdiction. The major legal systems in the world include civil law, common law, socialist law, religious law, and customary law (Stewart).” One example of this comes from “Totally Free?” It states that,“… my freedom from want does not allow me to steal your food, and your freedom of speech does not let you publish lies about me…( Totally Free?)”. This quote proves my point because it states that even though you are free, you can’t intrude on someone else’s natural rights given to them. The court and legal system decided ,”stealing has legal, social and personal consequences. Depending on the amount stolen and the means of committing the theft, legal punishments range from restitution and court-ordered counseling to imprisonment. Theft also causes loss of trust between members of society and increased prices to make up for the losses merchants suffer (Rivera).” Even though stealing is illegal, the consequences can be extreme. For example, if you steal a carton of eggs and a gallon of milk, then you should only have to pay the person back, but if you commit a larger crime like grand theft auto, then you should have a greater consequence. Although stealing a gallon of milk and some eggs isn’t a huge deal, compared to stealing someone’s car, you are still committing the same crime, and should have a greater consequence for both scenarios.

In the United States there are multiple ways to establish and preserve our freedom. Without the Bill of Rights, Compromise, and the Legal System, we wouldn’t be where we are today. Although these tools may not be the best and most effective tools to use, the United States has exercised their right to utilize these tools and has executed issues properly. Since our country is so superior, without utilizing these, our country’s freedom would deteriorate.

Your Freedom, My Freedom, Our Freedom. (2021, Mar 03). Retrieved from https://studymoose.com/your-freedom-my-freedom-our-freedom-essay 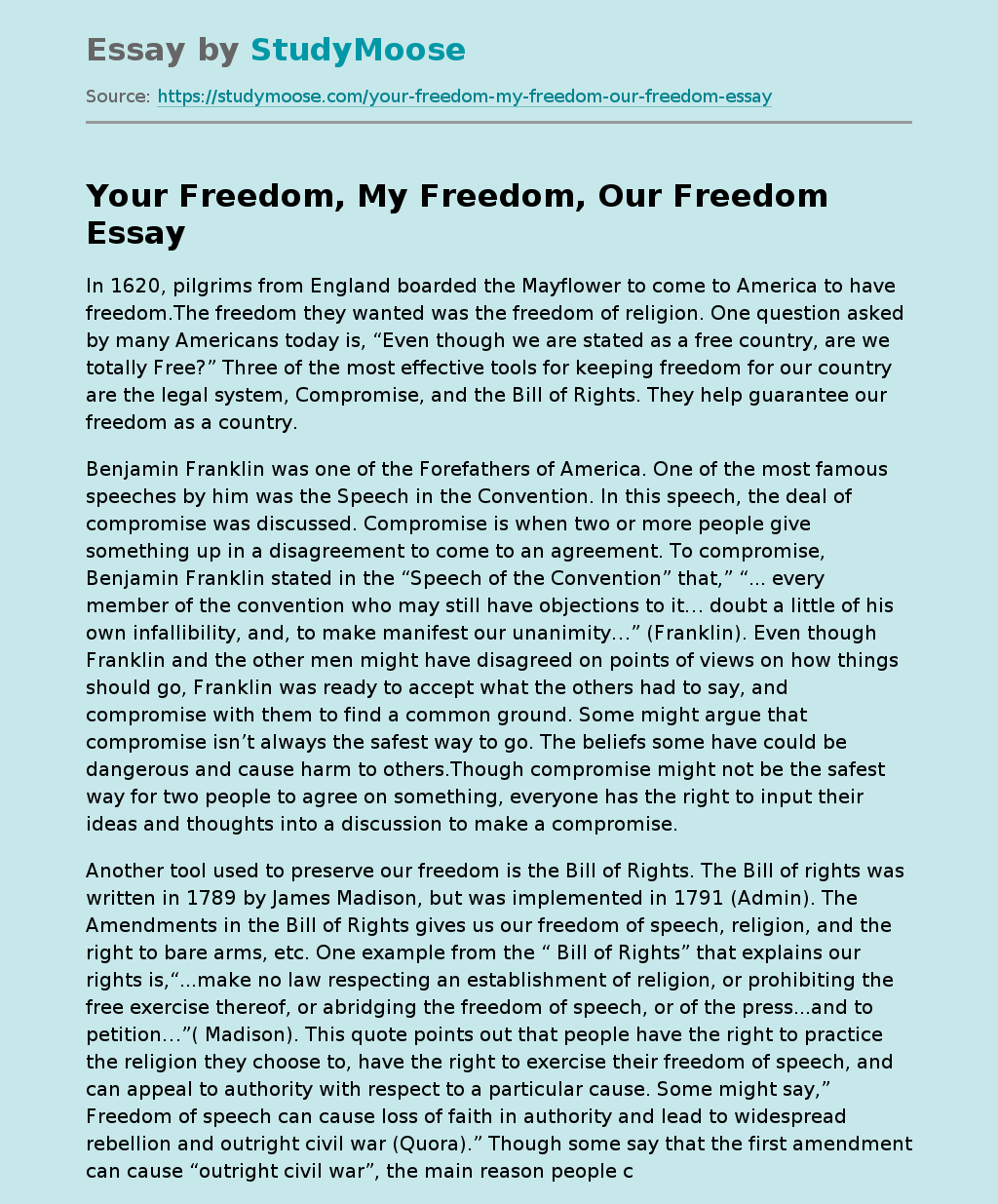