Your assignment is to compare the missions of the UNIA and the NAACP and write about each organization’s approaches to confronting discrimination. You will then assume the role of a young African American living in the 1920s who has joined one of the organizations and explain your reasons for joining in a brief paragraph. Before you get started, look over the NAACP’s mission statement, the Explanation of the Objects of the Universal Negro Improvement Association, and what you have previously learned about the two groups.

Don't use plagiarized sources.
Get Your Custom Essay on Your Assignment Just from $13,9/Page

NAACP
UNIA
Create their own society away from whites to strengthen their own communities.

Did not like segregation and tried to end it.

;Liked the idea of having black and white society separated. Had talks with the kkk about segregation Views on American society

Thought blacks and whites were equal and wanted to end discriminate Did not trust white people and thought blacks would always be treated as second class citizens 2. The NAACP and the UNIA focused on African American communities in different places, even other countries. How did the focus of the NAACP’s efforts differ from that of the UNIA? (2 points)

3. Imagine that you are a young African American living in a northern city in the 1920s. From that perspective, answer the following questions. (6 points)

a. In your opinion, which organization speaks to your needs most, the UNIA or the NAACP? Why?

UNIA represent the largest mass movement in African-American history. They view American society as hopelessly corrupt and enmeshed in evil that there is no possibility of salvation from within.

b. In your opinion, which organization has the greatest potential for bringing about positive change? Why?

The NAACP Sounds more positive and sounds like it could target more people whereas the UNIA sounds a bit discouraging but focused on more issues than the NAACP.

c. Which organization’s views on American society most closely match your own? Why?

4. Now, you are ready to write. Imagine that you are a young African American living in a northern city in the 1920s. Which organization would you join — the NAACP or the UNIA — and why? Write a diary paragraph explaining your decision. (16 points)

Be sure to begin with a strong hook and include a thesis statement that lays out your main argument, supporting details, and a good conclusion.

Your Assignment. (2016, Jun 17). Retrieved from https://studymoose.com/your-assignment-essay 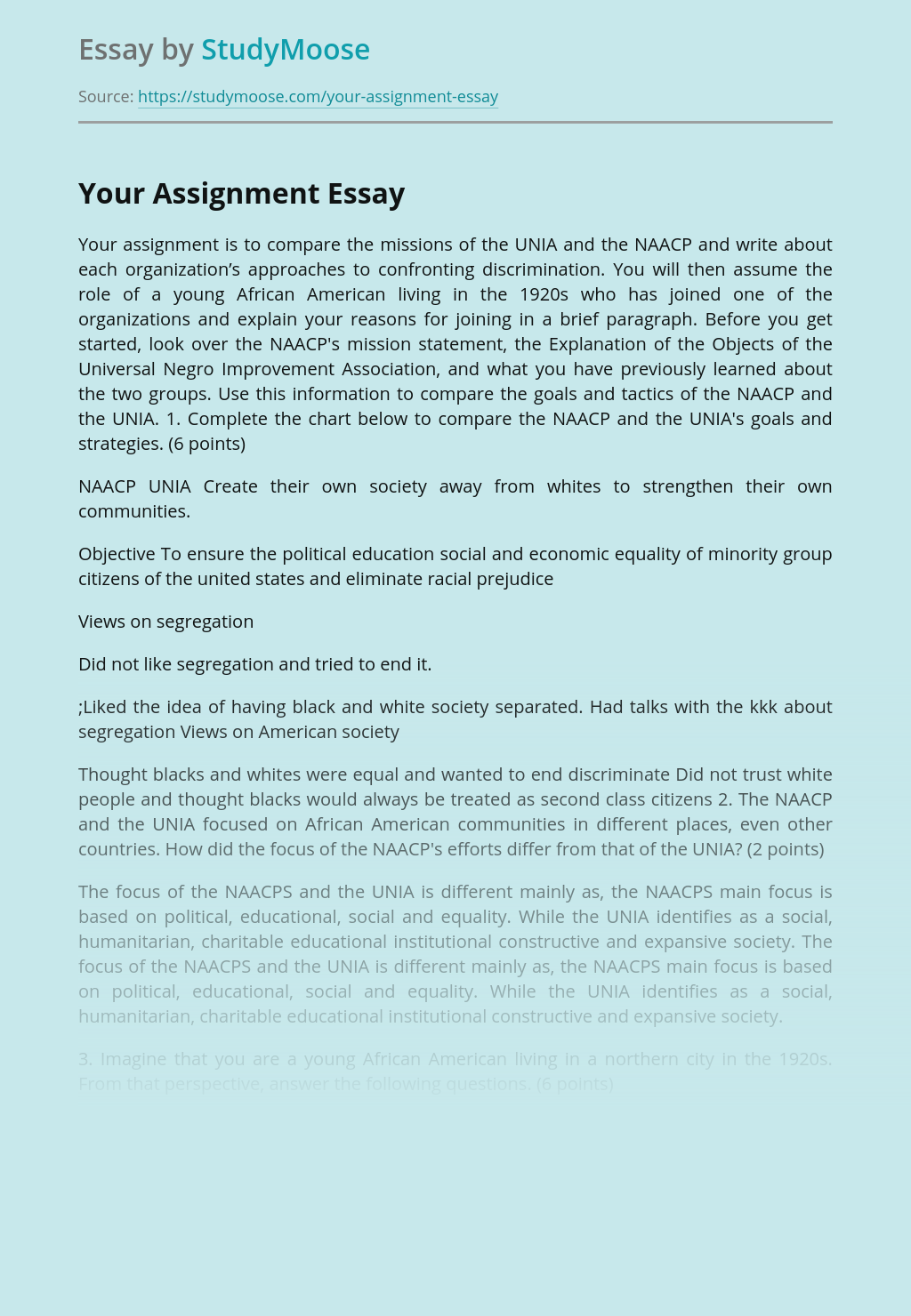 Background: In the process of acquiring another bank and increasing its assets to 12 billion dollars, the senior management at Valley National Bank has recognized that they need to make some critical decisions regarding the bank, if they want it to stay competitive in the future. Taking a look at the accounting department, there seems...

Gender Discrimination Against Women in the Workplace

Traditionally, women have been considered to be the weaker sex and subordinate to men. Moreover, their roles have been assigned to domestic and childrearing duties. The job market is male dominated, and women are often considered to be out of place therein. Women face considerable sexual discrimination in the world of work, significantly limiting their...

Get Essay
Explain the Different Types of Discrimination

Discrimination has lots of significance and several ways individuals can victimize others. Discriminations can be as basic as an individual making a judgment against somebody else by the method they dress or the method they speak or it can be the people are victimized (out casted/left out) due to the fact that they choose to...

“The opposite sex” Steven Doloff’s article, “The opposite sex?” offers an extensive look at the difference of genders. Doloff writes this article from the perspective of students from a classroom who are assigned to write an essay about being a member of the opposite sex for a day. This article focuses on the way that...

Can Prejudice Ever Be Eliminated

Can prejudice ever be eliminated? What exactly is prejudice? Contrary to popular belief, prejudice is not the same as discrimination, even though both terms are usually tossed into the fray together. Prejudice refers to the prejudgment; where people make assumptions or decisions even before being aware of the relevant facts. On the other hand, discrimination...