I agree to that statement. Of course, as an adult, many responsibilities lie on one’s shoulders. Be it of maintaining a family or duties at work. Though it can all be summarized in just a few words, they undoubtedly are of great importance, giving way to one too many hurdles along the way. That being said, life is definitely not problem-free for the average teenager.

Naturally, in one way or another, everyone faces a situation that is difficult or seemingly impossible to deal with.

Turn in your highest-quality paper
Get a qualified writer to help you with
“ Young people have more problems than adults points ”
Get high-quality paper
NEW! AI matching with writer

Social life, studies or the mere desire to explore can give way to needless complexities for the youth.

Certainly, adults have their own share of problems. These definitely are greater than insignificant teenage heartbreak. However as for an adult, there are usually pre-planned solutions or through previous experience, a possible solution to the problem. For instance, if job dismissal is a problem facing the adult, there are rapidly increasing opportunities for new jobs. Being in a state of debt, financial advisors are available to assist the adult and draw steps to follow which lead them out of the problem.

On the other hand, teenagers might be completely unaware of how to resolve a problem and would be seeking the needed guidance from other places. Though not always, they sometimes receive the wrong type of advice from peers and resort to other inappropriate actions such as smoking.

The average youth is keen to try new things in this ever changing world. Exploring and experimenting can surely be of great importance as it gives the explorer a chance to discover him/herself.

However, some actions are not of any importance, e.g. substance abuse. On the other hand, an adult would probably have grown out of the stage of experimenting. (S)He would be aware of the results that follow the action and avoid it.

Another issue the youth face is pressure through the media. Magazines and television programs constantly feature romance related headlines. Teenagers being at a stage where they are no longer children nor are they adults, are trying to discover their own identities. They are trying to fit it. This causes them to give in to pressure without much hesitancy.

Furthermore, distractions such as dating and substance abuse ultimately disrupts their studies. Parents have hopes for their child, and (s)he would have personal goals set out as well. A relationship tags along pressure, as there are responsibilities and expectations from both partners. If the teen finds it difficult to cope with pressures from a relationship as well as studies, (s)he would encounter failure in both.

What it all comes down to is that, although teenage problems do not seem as difficult as those of adults, they lack the maturity and skill to deal with different complexities, they aren’t as emotionally stable or experienced either. Consequently their lack of skill and understanding towards a situation can sometimes lead to further problems or make their existing problems more difficult to deal with than those of adults. It’s not about how many problems youngsters or adults have; it’s about how they see them.

Teenagers have more problems than adults. I concur to this statement more than anything. While others may argue that an adult is faced with many troubles, there is often something they can do about it. If they are in danger of losing their home they can call the mortgage company, they can get a second job – they have some power in the situation and they have some experience and knowledge in how to handle it. When a teen is faced with a problem they often have no power to exert any force over their situation.

Older people may consider teenagers as irritable youngsters but they may not realize that this attitude is justified as we teenagers face many problems and burdens at such a young age without the emotional maturity to view the situation objectives which just proves that this attitude is a result of handling a greater number of problems than a grown person.

Teenage stress increases with school work and as they grow older, a number of projects to be done, tests to cope up with, professional choices to be focused on, drama, literary forums, sport and other extracurricular activities from the school front add to the pressure. On the social front, a new and tantalizing horizon opens up- peer pressure, consciousness in public and the distraction from the media such as sports, music and internet amplifies. The teenager is under much stress to schedule time, prioritize work and achieve goals.

High parental expectation and parenting teenagers is like walking on thin ice. Parents need to strike the right balance. Often parents live their dreams through their children. This is when the pressure builds. Expecting the teenager to excel in academics, get good grades, be the child of their prospect – well behaved, responsible for themselves and sometimes for their younger siblings this proves to be one of the greatest problems teenagers face.

Added to this is teen love .Any high school is teeming with teen hormones, unrequited love and relationships. The teenage years can be confusing to many, parents included. Some teens fall in love young and curtain themselves off from other social experiences, whereas some are still immature, young and still exploring their own development. When teens are participants in a relationship, a variety of problems can arise that make teens feel pressured, stressed out and even neglectful of other responsibilities. Teenagers are young and inexperienced; while they think they know what’s best, a parent can see emotional destruction long before the teen feels it.

This immaturity, both of experience and emotion, can cause teens to think they are in love when they are in fact infatuated. This infatuation can cause teens to experience low self-esteem, devastation and depression when the relationship ends. In many ways, it’s wonderul to be young. There are so much to learn and enjoy. The whole world is free for us to explore, our innocence shining bright. The choices we make today will affect who we will be in the not-so-distant future. We have a bigger problem to resolve than adults. Overcoming these obstacles is what makes us matured, and lead us to the path of adulthood.

In all due respect to adluts, i believe young people have more problems, and i will state them in the following paragraph

Adults generally see teenager’s problems as being very transitory and unimportant in the grand scheme of things. in the view point of fparents, problems to them are basically financial ones, like keeping a job, p aying bills, raising their family to them, all these insignificant teenage problems are just temporary, they believe their children need to ‘get over it’ and tell them its ‘just a phase’ they would obviously see it all completely differently because theyve both grown up in two different worlds, thus having different view points AM I RIGHT When adults think of teenage problems they think of things like curfew, teenage heartbreak, friendship drama, school issues, and the latest fashions. Adults think of adult problems being things like financial problems, marital issues, losing a job, health concerns, and family issues.

Obviously, losing a job is a much bigger problem than wanting to stay out later on a Saturday night. however, since teenagers are less experienced and emotionally stable they see their problems as much bigger than they usually are they have a completely different view point towards their problems than that of adults Where I think adults make a mistake is in assuming teenage problems are less important than adult’s because they seem unimportant to the adult. Regardless of the problem, it is a real problem to the teenager experiencing it. And some problems are serious. Teenagers are forced into dealing with adult problems more frequently than they should be. But even if the problem is just a “teenage problem”, it is still serious to the teenager and they often lack the experience and power to deal with it effectively. not that im saying that every adults’ life is nothing but a walk in the park, because would just be immature to think, since getting a job and a house isnt the end of all problems but when an adult is faced with a problem, there is often something they can do about it.

They have gone into that adult world of theirs where they are overwhelmed by their own new problems and dont have time to take the youngster problems into consideration most teens actually have to get indulged into fashion and clothes to maintain their social status anyway i conclude that young people may not have more or less problems than adults, adults may have more problems than teens or even less, it doesnt matter how many problems one has or how big they are, what matters is how the different sets of problems people are dealing with are seen and taken into view, teens may have more problems than adults actually see them as but they still may not be taken into consideration teens may overexagerrate, but who can blame them? theyre still quiet young and havent seen the light of what /real/ problems are yet and what they experiance right now may be the biggest theyve ever faced, so they come to point where they believe theyve got the most problems everybody has problems is the point here.

Nobody has ‘more’ or ‘lesser’ problems, no one is able to have a problem free life , they will always follow you no matter where ever you go teens may face probs like stress, depression, anxiety, which are not at all taken into consideration, everyone who hasnt faced these type of problems will /never/ understand this, i, personally have seen it, i have seen how adults think of them as inconsequential and inconsiderable, however these are very grave issues our problems and emotions are written off as “teen angst” or “tantrums” and this can make it nearly impossible for us to get support. practically every aspect of our existence is put into a double bind. 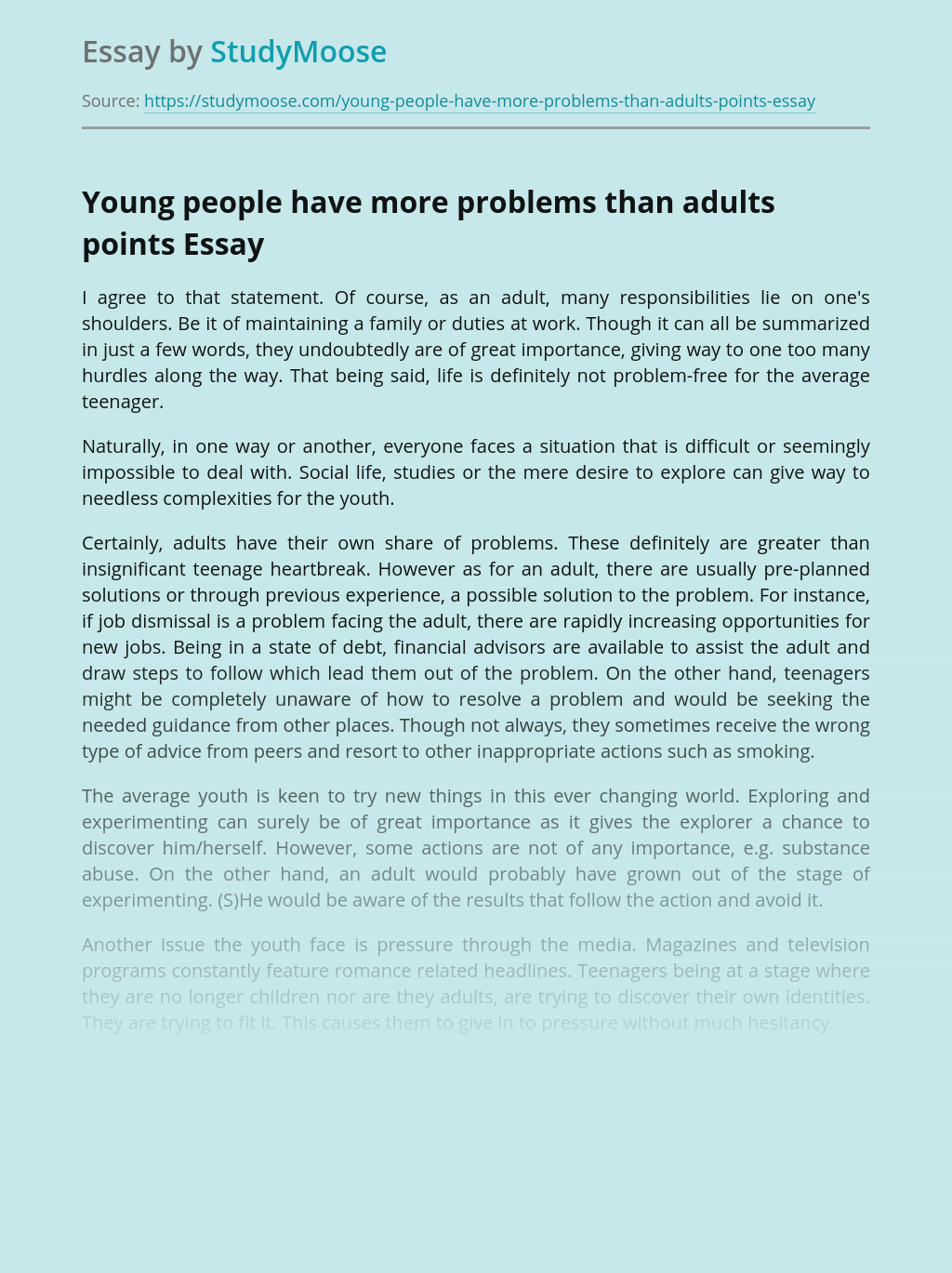 Turn in your highest-quality paper
Get a qualified writer to help you with
“ Young people have more problems than adults points ”
Get high-quality paper
Helping students since 2015
Stay Safe, Stay Original