Josiah Bont, the protagonist’s father, ‘was a man of few words, and those mostly curses’, as well as vile and physically and psychologically violent towards his wife, ‘she had worn the helmet a night and a day… [Josiah] yanking hard on the chain so that the iron sliced her tongue’, and his daughter, ‘see? I said you’d learn at me knee, and you’ll damn well do as I tell ye.

Someone fetch me a branks to muzzle this scold! Abusive, ‘He was a quick man, ever quick with a blow’, and a drunkard ‘he would end everyday there [Miner’s Tavern], drinking until he could barely stagger home’ but although ‘he loved pot, the pot did not love him, and made of him a sour and menacing creature’.

Don't use plagiarized sources. Get your custom essay on
“ Year of Wonders: Character Profiles ”
Get custom paper
NEW! smart matching with writer

He dies from a storm after his misfortunate forgotten retrieval from the punishment of having knives hammered through his hands into mine stowes. Aphra The character Aphra in the novel by year of wonders written by Geraldine Brooks is portrayed as mean, wild and cunning just like Josiah her husband.

Anna there step daughter ‘was always a pair of hands before I [she] was a person.

Aphra was very much a bystander in Anna’s life, especially when it came to Josiah beating her, Aphra’s only remark was when he struck her on the face ‘ for we’ll never marry her off’ only thinking of herself and not Anna’s wellbeing. Perhaps the only good thing Aphra ever done for Anna was encourage her marriage to Sam Frith ‘Better she be bedded early to Frith than bedded untimely by some youth’ This pushed Anna away.

Although Aphra was a very proud woman, she was jealous of the bonds Anna had with members of the community such as Elinor ‘You’re not my step daughter now.

Oh no. You’re too fine for the likes o’ me [elinor]’. ‘Out of our negligence and her loneliness came rage. Much rage and some madness…’ The grief from the loss of children as well as her anger towards her husband drives her into lunacy, and in the end the murder of Elinor and herself. Aphra Aphra Bont is wife to Josiah Bont hence she also is Anna Frith’s stepmother. She does not care about Anna’s welfare, “to my stepmother, Aphra, I was always a pair of hands before I was person”. Aphra does not defend her stepdaughter, Anna, from the physical abuse she endures at the hand of her father.

Her selfishness is highlighted by only defending Anna “if he [Josiah] struck me [Anna] on the face…for we [Josiah and Aphra] never marry her [Anna] off”. As a result she encouraged Anna’s marriage to her miner husband Sam Frith “better she be wedded early to Frith than bedded untimely by some youth”. The Plague changes Aphra from being a loyal wife to a wife who blames her husband for the loss of her children and her eventuating suffering, “and her [Aphra] loneliness came much rage.

In her madness Aphra laments on qualities she never possessed or gave others around her “who has pity… nd where may peace be found”. Aphra, the highly superstitious woman, ends up responsible for three deaths, including her own. Elizabeth Bradford Elizabeth Bradford is the aristocratic daughter of Colonel Bradford. Elizabeth is very proud and protective of her aristocratic family “We cannot have our family name flaunted in this village for all to stare at. ” Elizabeth remains very ignorant throughout, she expects her servants including Anna, to bow down to her, even after her family returns to the village after fleeing in fear of contracting the plague.

Although the reader sees Elizabeth as a very stroppy young girl, she reveals a vulnerable side to Anna when she breaks down and blurts out the seriousness of her mother’s situation, with her being pregnant with a baby that is not her fathers. Elizabeth was prepared to kill her new born half-sister just to save her mother’s life as she knew the colonel would surely kill both of them, this shows she is “her father’s daughter” they both have vicious characteristics. Elizabeth goes to Anna to alert her that her mother “Mrs Bradford” is pregnant; she is in a state of panic “The Blood.

Never have I seen so much blood. ” Elizabeth also begins to show care and interest in the welfare of her new-born half-sister when giving her to Anna, but also wants to get rid of her to protect her family name within the community. ANNA FRITH Anna character is the main, first person narrator. From the beginning, she appears to be content with her life, being married to Sam Frith “I was just 15. Marry me, he said. And why would i? My father’s croft had ever been a joyless place. ” She married Sam and was very happy, especially with the children they had together; Tom and Jamie. For I loved Tom from the moment I first reached down and touched the crown of his head, all wet and bloody as it was. ” But just before Anna thought her life was perfect, tragedy struck and her beloved husband Sam was killed in the mines where he worked.

“I had expected nothing different than the loss of our mine when Sam died. ” This left Anna loveless, lonely and jealous of the love others had, especially Rector Michael and Ellinor Mompellion. “I was jealous of both of them at once. Of him because Ellinor loved him, and I hungered for a greater share of her love than I could ever hope for. And from then, things only got worse for the poor widow of two. Her two boys were then affected by the plague, as well as the town of Eyam, and they only lasted a few short days. “I told him I loved him and would never forget him, and then I folded my body round my dead baby. ” All of this pain left Anna with so much grief. ”I could not yet bring myself to be among the beloved dead. ” Through the remainder of Anna’s journey, she becomes a more independent and stronger woman, through the death of her loved ones.

She helps the community in several ways, being a doctor, motherly figure to many children, midwife and scholar. “The rector would deal with the business that accompanied dying, while his wife and I managed the maters of those left alive. ” Anna finally escapes from her desires to be Ellinor and from the plague stricken village by taking voyage overseas. “For I was not Ellinor after all, but Anna. ” Michael Mompellion Initially he is depressed, has lost his faith and is perhaps mad. The novel then goes back in time and we see him in 1665, a 28 year old, charismatic minister of the church.

His voice impresses Anna. He is passionate, steadfast and stubborn. He rides a horse, Anteros, who is named for a Greek god who avenged unrequited love. He leads the village into quarantine. He promises that while he lives no-one will die alone and he works tirelessly throughout the plague period to support the villagers. Anna sees his relationship with Elinor as an idyllic marriage. His faith is strong and he punishes those whom he sees as sinning. Mompellion refuses to lift the quarantine until it is certain that the deaths have stopped.

He is unable to deal with Elinor’s death but finds comfort in Anna. He reveals that his marriage was not as it seemed and Anna loses all respect/love for him. He is not the man she thought he was. Mompellion accepts Anna’s rejection but helps her to escape the Bradfords. Anys Gowdie Anys is the same age as Anna but is unmarried and lives with her aunt, Mem. Anna was one of the children who used to make fun of Anys. Anys is the village midwife and produces herbs and medicines from her garden.

Anys is a woman that Anna admires, though she is shocked by her attitude towards the church and towards sex. Anys is killed by a lynch mob but “I am the devil’s creature and, mark me, he will be revenged for my life! ” (p. 93). Most of the people involved in her death are dead in a year. Anys shows and tells Anna that there are ways that she can live her life other than as the wife or daughter. Anys’ influence is present in Anna’s life long after her death. Elinor Mompellion was the wife of Michael Mompellion.

She was a kind motherly figure. The whole parish benefitted from her bareness, as she mothered children who weren’t mothered enough in their crowded crofts, took interest in promising youths who lacked preferment, counseled the troubled, visited the sick, making herself indispensable in any number of ways, kinds and classes of people” She was educated and had a good childhood’ Elinor’s childhood was filled with pleasure and with the acquisition of knowledge. ” Although at age 14 she had run off with a man and had gotten pregnant. The man left and she had an abortion. ‘I was depressed and I was deranged…. I have violated my own body with a fire iron. She had being in a bad place until Michael had come into her life.

‘He brought the brightness back into my dim world. He understood suffering, having felt it in his own life. In the end she is killed by Aphra. Colonel Bradford Colonel Bradford is a very proud man. He only believes in associating with people who he believes have worth and value to him. “The Colonel’s pride was gratified by the presence of Elinor Mompellion at his table” He is a very powerful man, who demands respect from those around him. He belittles his wife and others, as he considers himself higher and more worthy.

He seemed to take perverse amusement in belittling his wife” He can also be feared by his wife and daughter and those who work for him. He is not someone that you want to get angry, or someone who you want to double-cross. “Do you think I [Elizabeth] want to kill it? … I do it only to save my mother from my father’s wrath” Colonel Bradford could also be considered as very selfish and cowardly. He does not wish to fight any of his battles; rather he runs and leaves the mess for others to deal with. “And if God sends a lion to rip your flesh, will you stand steadfastly then, too? I think not” 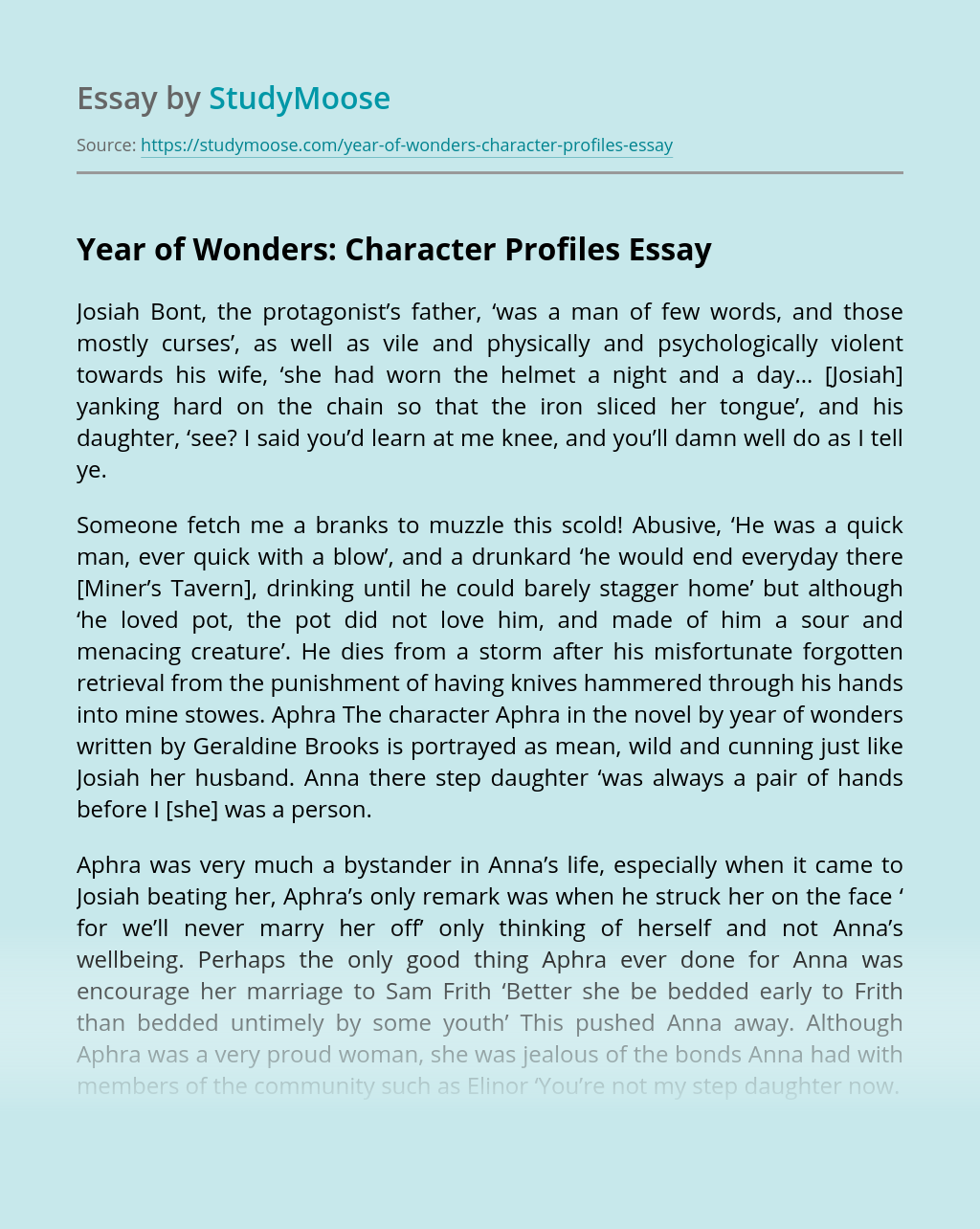