Good morning/ good afternoon everyone my name is John and today I would like to talk to you about Chris. Chris was a 23 year old man, who up until about 5 years ago lived a totally normal life. He lived an average childhood in an average house. At the age of 18 he moved out of his home to live in an apartment with his friends. On his 19th birthday his friends took him out for some fun, and that’s when everything changed.

They went to a casino, and for the first time since in his life, Chris made a bet, then a second, a third and a fourth.

Each time, thinking about all those ads he saw on TV and read in the paper growing up. He thought “wouldn’t it be great if I won something”. Little did he reaslise how unrealistic that scenario would be…and why not? It looked like people seemed to win everyday. (PAUSE) Just over 5 years later Chris committed suicide.

He was diagnosed with overwhelming depression due to an unpayable debt made by the gambling problem he developed all those years ago. You see, Chris grew up in an age where the advertising of gambling had no regulations.

Or THE NEXT TIME, or the next. He could not stop thinking that he was going to win. And how could he? He was only ever shown that he couldn’t lose, that the next time he would win…but he didn’t. He never did. I believe that the advertising of gambling in the media should be banned.

I am not here on a crusade against gambling itself, ill leave that to the politicians, I just want to talk about how we are allowing this disease to be so freely advertised in all forms of our media. In Australia over 70% of people gamble each year, and over 40% of these people gamble regularly, at least three or more times a week. The majority of these people are classified as problem gamblers, or ludomaniacs as the Australian Psychological Association has diagnosed them. People who still gamble despite devastatingly harmful and negative consequences.

Problem gamblers not only affect themselves, but all those around them as well, including their family members. This results into not only many broken Australian families but also it can ultimately lead to homelessness and like Chris, suicide. One in five suicides worldwide are related to gambling. One in five deaths I said. We are allowing the advertising of a franchise that leads to the deaths of 1 in 5 people EVERY DAY. Is this right? If we did stop all advertising of gambling this would be the first step in helping reduce Australia’s nation wide gambling problem.

The Australian Bureau of Statistics declared that in 2009 Australians lost over 15 billion dollars due to gambling. What is so sad is that the majority of these gamblers were aged between 19-24. The new generations that are turning 18 immediately turn to gambling as a form of entertainment because it has surrounded them all through their childhood. Jeff Kennett, former premier of Victoria recently said on 3AW that “there ISN’T a child today that ISN’T confronted with the concept that gambling is good. ” What is unfortunate is that as a country we are not doing anything to solve this problem.

Every child is exposed to this advertising at a young age, they are shown statistically unlikely events of people winning millions. This is creating the misperception that there is no downside to gambling, that these perfect scenarios happen all the time with no negative consequences. This is what in later years leads to the breakdown of families and even the suicides of the victims of gambling and gambling advertising. I ask you, why do we let these GREEDY, FACELESS companies get away with showing this POISON on TV?

I’ve just talked to you about this problem our nation has, now let me tell you about another problem our nation faced and dealt with, that of the advertising of smoking. We forced the ban on the advertising of cigarettes and tobacco because of many factors, all of which are shared in common with gambling. They both posses immediate health risks such as stress and depression and they break up a lot of Australian families. Neither of the two are promoted by the Australian federal government due to their knowledge of their negative ramifications.

Furthermore, they are both known to be heavily addictive, requiring extensive management in the recovery of their victims. Also the cost of both tobacco and gambling is high, both financially and familial. They are both SO similar, but we have treated them SO differently. 95 % of the Australian public believes that cigarettes do more harm than good, so we banned the advertising of cigarettes. Well according to the ABS, 70% of Australians that think that gambling does more harm than good, so why have we done nothing about ITS advertising.

Why are we cracking down so hard on cigarettes, yet allowing nothing to be done about the advertising of gambling? It’s just not good enough! I’m sure that we have all seen those Tattslotto ads that depict the perfect dream scenario, or those guys at the TAB who go crazy when they win. Don’t get me wrong, I think they are well constructed ads, however they are essentially false advertising. They present an unrealistic idea of gambling. How many gambling ads have you seen of someone losing? Those ads would be more realistic as more people on bets, than they win.

It is actually more likely that you will die going to CASH IN your first division Tattslotto ticket than it is to actually win it in the first place. People may say to me that everyone already knows that they are not going to win. Then why do we even allow these corporations to publish these LIES in the first place? Why even allow these RIDICULOUS commercials to surround young children? Why are we encouraging something that we KNOW is wrong, that we know hurts us and is unrealistic and fake. Do we hate each other so much that we allow ourselves to be lied to and deceived?

It is up to the government now, to put an end to all this. It is up to Julia Gillard to help dramatically reduce the extraordinary sickness of our nation. The government will still receive their money from pokie machines and other forms of gambling regardless of the advertising, I’m sure of this. But how about somewhere along the way we stop cramming those ads into the Australian family home. Maybe we can stop some of the devastation from occurring by preventing our young being exposed to this. Maybe eventually prevent people from ending up like Chris. 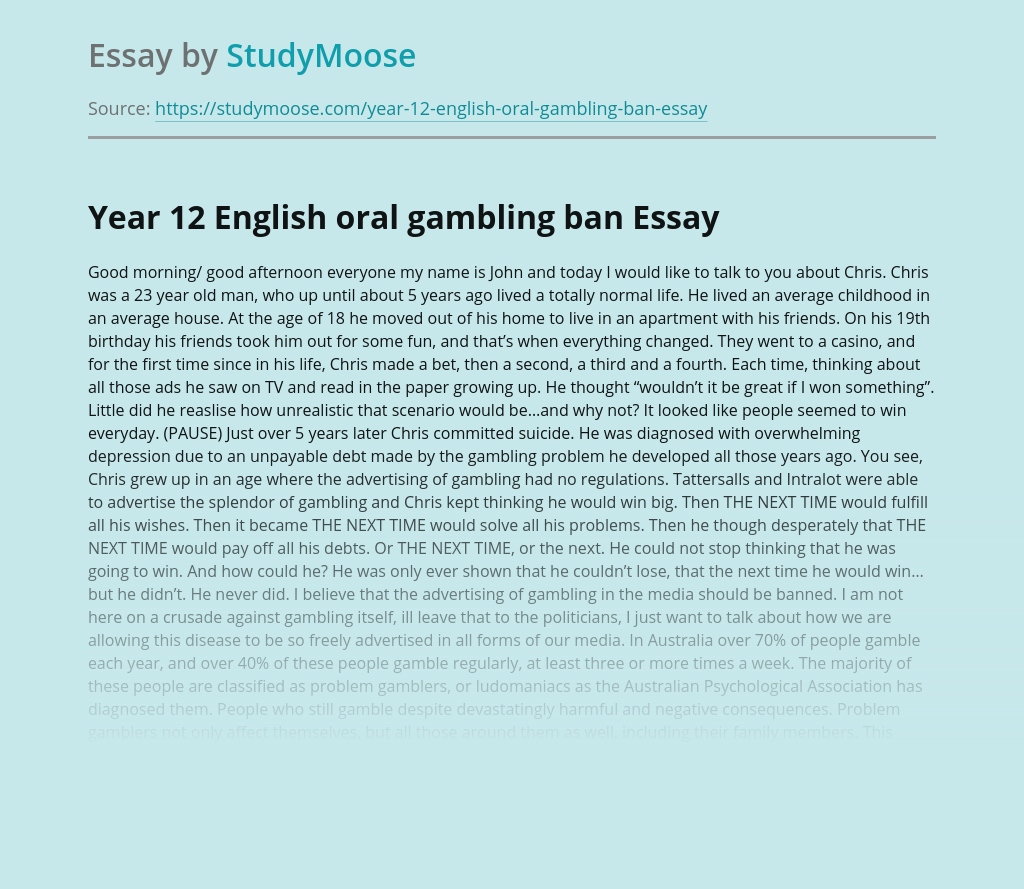