The word Yankee has a different meaning for many of us. Some use it as a derisive term to hurt ones feelings, others use it proudly as an expression of patriotism. It is a struggle that has ensued since America began to be colonized. Where the word Yankee originated has been debated for many years. The most common belief is that it derived from the Dutch nick name “Janke” meaning Little John or Jack. It is also believed to be the product of poor pronunciation of the name of a Dutch pirate named John Kees or Captain Janke “Captain Johnny or Captain Yankee”.

Don't use plagiarized sources. Get your custom essay on
“ Yankee Pride or Damn Yankee ”
Get custom paper
NEW! smart matching with writer

(answers. om) Many fictional stories have also been created describing its origin.

One known story as believed by Virginians is that the word Yankee derived from the Cherokee word “eankke” and was said to have the definition of slave or coward. This theory has since been rejected by Oscar G Sonneck of the Librarian of Congress after a thorough study and being unable to prove any such Cherokee word exists.

(The Encyclopedia Brittannica Inc. ,) Regardless of its origin Yankee is a term that has developed in to geographical stereo types as well as a common insult and a term of hometown pride.

Dictionary. com states the definition as a noun, unknown to many the first definition is “a native or inhabitant of the united States” (Dictionary. com) Many believe that “Yankee” only refers to a native of the Northern Region of the United States. That definition originally gained popularity during the Civil War when Confederate Soldiers began referring to Union Soldiers as “Yanks” or “Yankees”.

However, it began as a word of mockery by early Dutch settlers in New York, then New Amsterdam, as an impolite reference to English speaking colonies, perhaps because of its use as a term for Dutch pirates.

Later during the French and Indian War, British General James Wolfe used the term to derisively refer to Native New England Soldiers in his Army. (Family Word Finder, The Readers Digest Association Inc. ) This could explain why by the end of the Revolutionary War the Colonists embraced the word Yankee as their own term of pride. During the civil war the confederates once again used the term “Yankee” referring scornfully to the Northern Union soldiers, only to have all Americans known as “Yankees” during WWI and WWII. (Dictionary. com)

The second definition of the word Yankee is “a word used in NATO communications to represent the letter Y”. NATO (North Atlantic Treaty Organization) is an organization of 28 countries who communicate and cooperate to establish security amongst us. The NATO Phonetic Alphabet is the most commonly used spelling alphabet. It assigns a code word to every letter in the English Dictionary. Each words opening sound represents that letter. It is used for by a variety of organizations such as radio, telephone and military communications. (Alphabravocharlie. info)

The third definition is an adjective “as pertaining to or characteristic of a Yankee” (Dictionary. com), such as Yankee Pride or Damn Yankee. The first documentation of the word Yankee by the British in reference to Americans occurs in the letters from 1780’s written by Lord Horatio Nelson. (answers. com) It also became the title and catch phrase in a well-known tune called “Yankee Doodle Dandy” whose origination is also in question. The first legend is that it was written by the British to poke fun at the American soldiers and was later adopted by the Americans to embrace and enjoy being everything the British disliked.

It is believed this may have begun before the Revolutionary War again during the French and Indian War. The British thought the deeply rural American Colonies lacked class and sophistication. At that time he term “Yankee” was used in reference to the Americans lack of aristocracy. The word “Doodle” then referred to a simpleton or fool and to be called “Dandy” meant that a person was ill dressed with ill manners, thus completing what the British thought to be a perfect marching song. (Smart-Central. om) While many may know only the first few verses Yankee Doodle is said to have about 190 verses of poking fun at the motley crew of American Soldiers.

Ironically when the British surrendered and we gained our independence, the Americans played “Yankee Doodle Dandy” and it has since been a fun rhyming tune heard every year around the Fourth of July. (Archiving Early America) In addition to referring to an individual or a geographical group Yankee has become a recognized brand name. It is not only the name of one of the most beloved Major league Baseball teams, The New York Yankees whom play at none ther than Yankee Stadium but also Yankee Candle, one of the most profitable candle makers in the country.

Many other American companies have adopted the name Yankee to represent their business as well such as; The Yankee Corporation and Yankee Environmental Systems Inc. So while many will still use the term Yankee as fighting words it has become clear that when an individual is referred to as a Yankee they can and will embrace it and keep the debate of insult or compliment an active one. 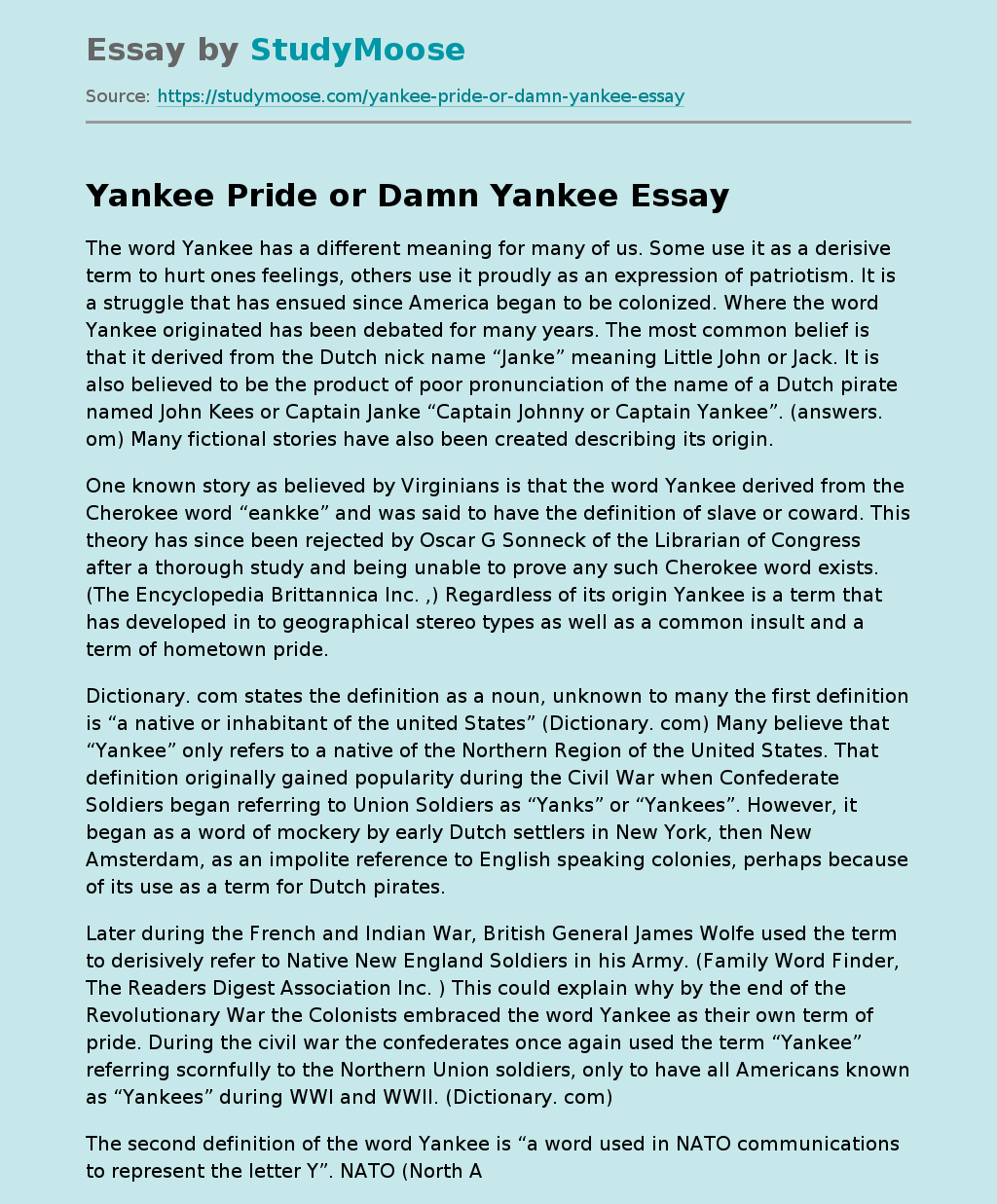