Yakult (Malaysia) Sdn. Bhd. was incorporated in February 2004 and it is a subsidiary of Yakult Honsha Co. Ltd, a Japanese listed company and a world-renowned manufacturer of probiotic products. The Company upholds the philosophy of promoting good health and preventing diseases through the use of probiotics. There is only one Yakult factory in Malaysia which is located in Seremban, Negeri Sembilan and its Head office is in Glenmaria, Shah Alam. This factory produces Yakult for the whole of Malaysia, as well as for export to neighbouring countries.

Don't use plagiarized sources.
Get Your Custom Essay on Yakult Marketing Strategies Just from $13,9/Page

Besides that, there are branch offices in Johor Bahru, Melaka, Penang, Kuantan, Ipoh, Seremban, and Kota Bharu.

About Yakult – The Probiotic Health Drinks

Yakult Ace and Yakult Ace Light have HACCP and HALAL certificate which ensure that the products are safe to consume and suitable to all Malaysian including the Malays.

2. Target Marketing
Yakult’s current primary target market is the housewives and the collar workers. This is because housewives may know more about the benefits of Yakult and thus will buy for their family to consume. The collar workers will need some supplementary such as Yakult which contains probiotics that will improve their health due to pressure on work and lack of sleep.

3. Differentiation (Points of Difference)
Yakult consists of the beneficial bacterium namely “Lactobacillus caseiShirota strain” (Shirota strain) which is the ‘strongest’ strains of beneficial bacteria and is the main ingredient in Yakult, and has been shown to replenish the supply of healthy bacteria in our intestines and benefit human health. This well-known and specially cultivated probiotic bacteria distinguishes Yakult cultured milk from others such as Vitagen. Each bottle of Yakult consists of 30 billion of this probiotic bacterium which is 3 times higher than other probiotic products. Yakult direct competitors are Vitagen, Nutrigen and Solivite whereas indirect competitors are Nestle Bliss, Dutch Lady and Tropicana Twister.

4. Positioning (value proposition)
“Yakult, the probiotic health drinks” and“free of preservatives, conditioners, stabilizer and colourings” always stated in the promotion statement (its current value proposition). Yakult is backed by 70 years of research in probiotic and its main ingredients – Shirota Strain (its probiotic bacterium) has positioned Yakult into the health drinks line that contains 30 billion of live Shirota strain (the beneficial probiotic bacterium) in each bottle which is 3 times higher than other competitive products.

Product Description
There are two types of Yakult, namely Yakult Ace (original) and Yakult Ace Light. Yakult is packaged in an 80ml bottle and each bottle contains at least 30 billion of probiotic bacterium “Lactobacillus casei Shirota” (Shirota Strain). Both Yakult Ace and Yakult Ace Light are almost fat-free and are equivalent to 0.5 Weight Watchers points. Besides, Yakult is only available in one flavor and one color. This is because different flavors require additional colorings and preservatives. So, Yakult is totally free of preservative, conditioner, stabilizer as well as artificial coloring.

The natural (brownish) colour of the Yakult drink is resulted from caramelization process during the heating of milk and sugar. Yakult has a low Glycemic Index (GI), which means that the sugar in Yakult enters the blood gradually and it does not significantly increase the blood glucose level. Yakult taste sour. This is because during fermentation the good bacteria produce organic acid such as lactic acid which tastes sour. Hence, sugar is needed to balance the very sour taste due to high concentration of good bacteria.

Has a red lid.
Has glucose and sucrose (common sugar), which has about the same sugar level as an apple. Contains 63 kilocalories energy per bottle.
Contains water, skimmed milk powder, Calcium, Vitamin B6, B12, D and Niacin (Vitamin B3).

PRICING STRATEGIES
Pricing strategies
1. Product Line Pricing
Yakult Ace has a higher concentration of the beneficial probiotic bacteria “Lactobacillus casei Shirota” whereas Yakult Ace Light contains the same concentration but with 50% less sugar and less sweet taste. Yakult priced their products at a higher retail price as compare to their competitors. They come with 5 bottles (each 80ml) in a pack where currently:

3. Uniformed Delivery pricing
In year 2007, Yakult started the home delivery service system in Malaysia. Yakult uses this strategy where the delivery is free of charge regardless of the location. This service is known as “Yakult Ladies” in which they deliver the drinks to housing area and right to the customer doorstep. Usually these ladies are housewives who have a desire to work part time to earn some extra income, while sharing some health knowledge with their neighbours. Most of them are well trained. Although the delivery is free of charge, it is only available in certain area such as Selangor, Kuala Lumpur, Melaka, Seremban, Penang, Johor and Perak.

2. Yakult Trucks
Yakult also sell their products through mobile selling by using their own Yakult trucks. Sometimes, Yakult trucks can be seen at night market or primary schools.

3. Home Delivery Service
In Year 2007, Yakult started a special home delivery system in Malaysia via “Yakult Ladies”. They visit housing areas to deliver Yakult right to customer doorstep. The delivery service is free; however, it is only available in certain areas for now. Selangor, Kuala Lumpur, Melaka, Seremban, Penang, Johor and Perak are the only area that Yakult cover so far.

The advertisement used by Yakult shows that Yakult helps promote health by introducing beneficial bacteria for intestinal balance of consumers which leads to good health. Yakult has chosen well its advertising media by using media that has wide circulation and impact such as through newspaper, television and also magazines related to health and healthy lifestyles. In order to position themselves well in customers’ minds Yakult uses the tagline “Everybody. Every day” The tagline has the core concept of telling people that Yakult is for everybody and it can be consumed everyday when desired.

In order to convince people to put aside their misconceptions of what Yakult might taste like, Yakult Company has implemented the sampling program in major supermarkets such as Jaya Jusco, Tesco, Giant, Mydin and so on to provide consumers with the opportunity to: Taste Yakult’s unique fruity flavor

Have their questions answered
This allowed consumers to make an informed decision about purchasing Yakult.

Advertising campaigns featured in top selling women’s magazines and printed educational resources were distributed during sampling to reinforce the messages conveyed during the sampling events. Posters and signage about Yakult featured on buses, trams and even shopping trolleys.

Yakult was able to increase its market share in the market by coming out with the double pack where 2 pack of Yakult drink are bundle together and sold at a reduced price of RM 8.50 for Yakult Ace and RM 8.90 for Yakult Ace Light. In trade promotions, Yakult was able to obtain extensive distribution and shelf space in major supermarkets such as Jaya Jusco, Tesco, Giant, Mydin and etc.

Yakult was able to gain good public relation by facilitating school visits to its factory site. The factory tour allows students to gain an insight of the benefits of bacteria. Yakult also promote their product through internet. They have their very own websites to educate internet users the benefits of the drink. They had also constructed a fan page at Facebook to keep in touch with their customers. 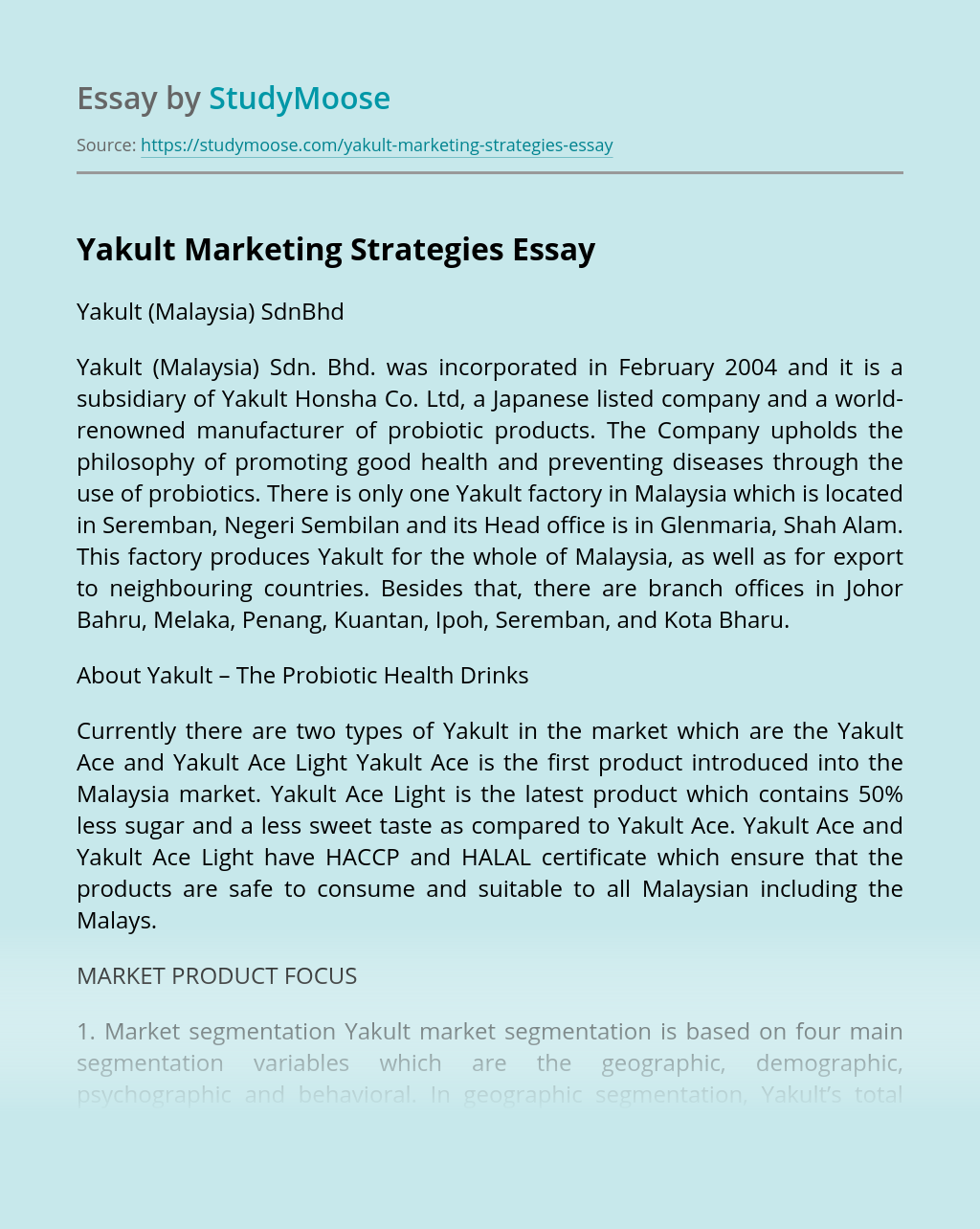 Riza, we are planning to move to Kuala Lumpur. ” As soon as my mother said that, my eyes incredibly got bigger and I made a little protest, “What? No! I want to stay here. I love this place. ” “Then, what about your dad’s work? You know your dad is working there,” my mom... VIEW ESSAY

Definition of the Malay Culture Mankind is the only civilized creatures in this world. Culture can be defined as the integrated system that relates to values, beliefs, behaviors, norms, artifacts and the other works of any society. In the human history, this is the culture that divides human beings or separates one community from another.... VIEW ESSAY