Emily Jane Bronte was born in 1818. She was a British novelist and poet. She is famous for her most renowned work Wuthering Heights. She also had a pen name ‘ Ellis Bell ‘. She died in 1848 due to tuberculosis. There are many themes of the novel Wuthering Heights. But the main thing that everyone should know is the love between Catherine and Heathcliff. Although they love themselves madly, still they were parted due to the rising culture of capitalism at that time. The other themes are:

The novel was set in such a time when capitalism was changing not only the economy of the society but it changed the traditional practices also.

Don't use plagiarized sources. Get your custom essay on
“ Wuthering Heights Author ”
Get custom paper
NEW! smart matching with writer

As we go further reading the novel we will see that the love between Catherine who belonged from a very wealthy family and Heathcliff who was an orphan had slowly turned into an act of highly convoluted revenge and hatred.

The love between Cathrine and Heathcliff was so in balance that it was not just mere sexual desire.

Wuthering Heights is a book that contains the elements of gothic fiction. It was written in the Victorian Era. It is now considered a classic in English Literature. This book has inspired many adaptations like drama, radio, ballet and even a song by Kate Bush.

This book has many critics because of the presence of extreme cruelty, the difference in social class, and childhood abuse.

This is just an overview of the entire novel. If you want to read and enjoy the whole novel, then you have to read the book. So, without wasting any more words lets jump to the summary. Hope you like it!!! The story took place in 1801 when Mr. Lockwood was trying to find peace, lived in the south of England. He met his landlord, Mr. Heathcliff who lived in a remote land in his own farmhouse, Wuthering Heights. There Lockwood found strange things. He found Mr. Heathcliff to be a gentleman with a very poor and rather a very aggressive person, Joseph, an old servant with very ill-temper, a mistress in her mid-teens and a man looks like a family member yet dressed and spoke like a servant.

It was snowing outside, so Mr. Heathcliff agreed to let Mr. Lockwood spent a night with them. Everything was going well. After dinner when he entered his room, he saw a few graffiti and books. Later he found that it was left there by a former member of the family, Cathrine. That night when he went to sleep, he dreamt about Cathrine. It was not like some other regular dreams. What he dreamt was that the spirit of Cathrine was trying to enter his room through the window. He woke up in fear and screamed and was gasping for air. Mr. Heathcliff came down and he uncomfortably opened the window in the hope to let Cathrine enter through the window.

Mr. Haethcliff showed his room to Mr. Lockwood and he stayed in that room for that night. The next morning, Heathcliff took Lockwood to Thrushcross Grange. After he visited Wuthering Heights, Mr. Lockwood fell ill and stayed there for a few days. He was also provided with a maidservant, Nelly Dean. Later Nelly told the whole story of both families of Wuthering Heights and Thrushcross Grange.

From here we will see the actual story and history of both the families. Mr. Lockwood wrote everything in his diary that Nelly told him. From there we get the story. Actually it is a story told to us by Mr. Lockwood. As we see that Lockwood has already become frightened so much that he becomes ill due to it. So, basically the story has already got spooky. Lets what happens next!!!

From here we will basically read Mr. Lockwood’s diary. Everything started about thirty years ago. Then the owner of Wuthering Heights was Mr. Earnshaw. He lived with his son Hindley, his daughter Cathrine and young Nelly Dean who was Hindley’s servant as well as at his age. On his visit to Liverpool, Mr. Earnshaw found a little homeless boy and felt pity for him. So, he took the boy and brought him to his home and named him Heathcliff. As the day passed, the bond between Mr. Earnshaw and Heathcliff grew stronger and stronger. This made Hindley very jealous of him. Cathrine and Heathcliff also became closer. They played together and started to spend time together.

When Mr. Earnshaw came to know about Hindley’s jealousy, he sent Hindley to study at university. After three years Mr. Earnshaw passed away. Now Hindley became the legal owner of Wuthering Heights. He returned to his home with his wife, Frances. He agreed to let Heathcliff stay in that house as a servant. He not only did that but he regularly misbehaved with him too.

After a few months of Hindley’s arrival, Heathcliff and Cathrine started to spy on the Lintons’ of Thrushcross Grange. Lintons’ were brother and sister, Edgar Linton and Isabella Linton. When they were caught they tried to flee but were caught. Cathrine was bitten by the guard dogs and was taken into house whereas Heathcliff was sent home. Lintons’ were known as gentlemen at that time. They were very influential and belonged to the elite society.

While Cathrine was in the Lintons’ house, she was groomed as a girl and how to behave like one. So, when she came back to Wuthering Heights, almost all her behaviors had changed and became more girly. To Heathcliff, she was a completely new girl. She even laughed at Heathcliff because of his untidy clothing and stuff. Next day, when Heathcliff came to know that Lintons’ were coming to Wuthering Heights, with the help of Nelly’s advice he dressed at his best to impress Cathrine, but everything was ruined when Heathcliff and Edgar started arguing themselves and as a result of that Hindley locked Heathcliff in the attic. Out of anger and pain, he vowed to take revenge on everyone who was responsible to ruin his life. 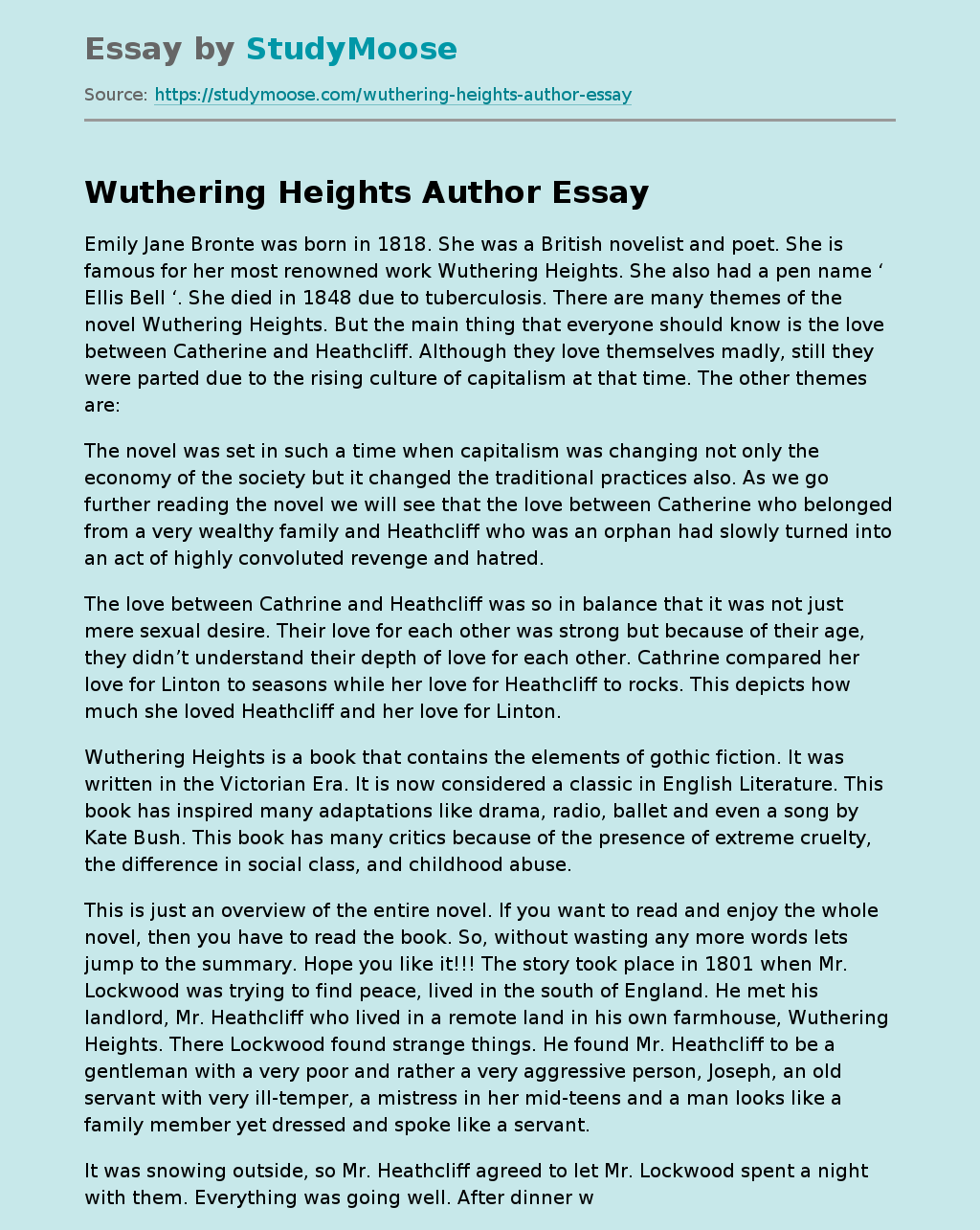