The detectives of XIX-XX centuries in literature

The story had still contained the five traditional elements but I felt the story to have lacked in its plot. There was the perfect crime, how the blue carbuncle got to get in the Turkey and there was the wrongly accused. When Sherlock had the acquaintance Henry Baker, Sherlock thought it was Henry Baker who committed the crime, however when interviewing the suspect Sherlock thought Mr Baker would have had a different reaction to the situation. Sherlock had never mentioned the blue carbuncle but just wanted to see what his reaction was.

Don't use plagiarized sources. Get your custom essay on
“ The detectives of XIX-XX centuries in literature ”
Get custom paper
NEW! smart matching with writer

When told, Mr Baker was clearly innocent, for his reaction to hearing that the turkey was devoured was understandable but when he was told he would get a replacement he was clearly pleased. It had seemed as if he had lost something worthless. To Sherlock’s astonishment that was not the end to the case. When Sherlock found out that the police put an innocent man in jail, Holmes remarked, “Hum so much for the police court”.

Holmes obviously disapproves of the police and finds them to be dim-witted, He also believes there has been no justice done.

The surprise was Sherlock had faith in him.

Detective Fiction had come to a halt after the reign of ‘Sherlock Holmes’ not as many people were reading detective fiction. During the nineteen- twenties and the thirties detective fiction was at its peak. This is because of the famous detective Fiction writer ‘Agatha Christie’. Agatha had brought a new style of writing which had intrigued the world over. It was a huge change from Sir Arthur Conan Doyle stories.

Sir Doyle would emphasize on his superior detective, but Agatha would emphasize on her story plot and design twists and puzzles to go into the plot. The mob found this more intriguing and exciting so more and more people started reading her books. The main difference was that Agatha involved the reader much more. The reader would be psychologically trying to find out who or what the criminal was however the reader would normally get it wrong. Another reason to detective Fiction’s popularity was that, before Queen of crimes reign a huge majority were involved in the world war, so a lot of people had experienced the deaths and mysteries first hand. A lot of them might have found it exciting, so a lot of them would of found it exciting reading Detective Fiction.

The detectives of XIX-XX centuries in literature

First their was Sherlock Holmes the detective of the late nineteenth century then came the two detectives of the nineteen-twenties and thirties ‘Hercule Poirot’ and ‘Miss Marple’ who were both Agatha Christies detectives Hercule Poirot was brilliant Belgian detective. His sidekick and the narrator Arthur Hastings were always solving crimes together. Although detective fiction had changed, it did not change a great deal for example Agatha uses the sidekick as the narrator as did Sir Arthur Conan Doyle.

In appearance five feet four inches, carried himself with great dignity, his head looked like an egg. He had a very stiff looking moustache, he was incredibly neat and “I believe a speck of dust would have caused more pain than a bullet wound” the last quote was from his sidekick who worked closely with him.

Miss Marple, Agatha’s second Detective was very worldly in her appearance, she was very tall with a wrinkled looking face and she had “an uncanny knack of always being right. The first Agatha Christie novel I had read was the Orient express, which contained Hercule Poirot as the Superior detective. Compared to Sir Doyle’s novels this one had seemed to be quite different. Her novel “The murder on the Orient express” had all the criteria, a traditional detective story should have, and however Christie would use these elements and manipulates them.

The crime committed was perfect but not as perfect as some of Sir Doyle’s novels. The victim was drugged and then stabbed Twelve times. The victim, Rachett (real name Casetty) had seemed to be dead in the early hours of the morning, however the door leading into Cassetty’s cabin was locked so how could anyone have got in. Also, while anyone was seen near or inside the cabin, after everyone had left, you heard Rachett shout out he had a nightmare and during that time his cabin door was locked.

Poirot had proved to be a superior detective but there was not as much emphasis on him as there was on Sherlock Holmes. When Poirot was inspecting the body, His excellent and superior observations led him to find the body to have “…Two wounds, he pointed ‘they are deep, each must have severed blood vessels and yet the edges do not gape” He believed the wound should have bled more if they were primary death stabbings, this had led to the theory that Rachett had died earlier by drugs.

After observing the body “Poirot’s eyes were darting about the compartment. They were bright and sharp like birds.” Poirot had found a pipe that did not belong to Cassetti, and immediately claimed there was a man in the room at the time of the death. “There was no pipe in any of his pockets, and no tobacco or tobacco pouch” To show his superiority Poirot claims that when he looks at evidence “It is the psychology I seek, not the finger print” like Sherlock, Poirot has the same mentality. He seeks for the psychological, however Poirot concentrates on the facts where as Sherlock challenges the more controversial side and when clues are being examined Poirot looks at them and then thinks are ” those clues are they really what they seem to be.

When Poirot was seeking information about the Armstrong case, he had spoke to Armstrong’s secretary who had failed to cooperate, however using his intelligence he had listened to her grammar very carefully and assumed she was lying because of her slang. When Poirot is trying to solve a problem, he tends to try and think like the murderer “that if the murderer intended us to believe that he had escaped by way of the window he would naturally make it appear that the other two exists were impossible”. He Poirot is trying to perceive how the murderer got out.

Hercule Poirot as the Superior detective

Like Sherlock Holmes, Poirot is very intelligent and also has some eccentric features. Poirot, for example, when he goes to bed, he wears a special headgear to keep his hair in place. In ‘The Murder on the Orient express’ Christie uses both dim-witted police and sidekick and roles them into one element. In ‘The murder orient express’ she uses Dr Constantine and the director as this element. Both act as the dumb police and the right hand man. While Poirot would be investigating or interviewing, the director and the Dr would always be at Poirot side coming up with ridiculous suggestions as if they were his sidekicks and the dim-witted police at the same time. To show that they were dim-witted, the director would have said something, which had shown his stupidity, and he would then reply, “You understand my point”.

After hearing what the director has to say Poirot had made a sarcastic remark “The matter begins to clear itself up wonderfully! The murderer was a man of great strength, he was feeble, it was a woman, it was a right-handed person, it was a left handed-person -Ah! c’est rigolo, tout ca !’. The wrongly accussed suspect was the mafia, Although no one from the mafia was on the train, some percieved they were the murderers.

Christie had gave us a very unexcpected twist for the surprise ending. It was a very unpredictable ending compared to one of Sir Doyle’s novels. It was surprising to know that all twelve passengers (suspects) were the murderers, each one had stabbed Cassetti, which all added to twelve stabs. The twelve all entered the room through the communicating door leading into Ms Hubbard’s room. No one had seen them because everyone was in on it. A similar story to ‘Murder on the Orient Express’ was Christie’s “The Murder of Roger Ackroyd”. Both stories had similar characteristics i.e., both stories connect the dim-witted police and the sidekick role as one element. The story had all the traditional features a detective fiction story should have, however Christie would alter these features to add more excitement to the plot.

The crime committed seemed perfect, no one was caught red handed and the evidence seemed non-existent and the criminal was no where to be seen when reported dead. The wrongly accused suspect was Ralph Paton. Everyone had thought Mr Paton was the culprit because of his absence and the evidence. No one had known where Mr Paton was staying or hiding, therefore he gave the impression he was the murderer so he had to evacuate because of the situation. At first I thought Mr Paton was the murderer but as the story went on it became more obvious that Ralph Paton was not the murderer because of their being so much evidence towards Mr Paton you automatically knew he was the wrongly accused suspect.

The detectives of XIX-XX centuries in literature. (2020, Jun 02). Retrieved from http://studymoose.com/wrongly-accused-suspect-6631-new-essay 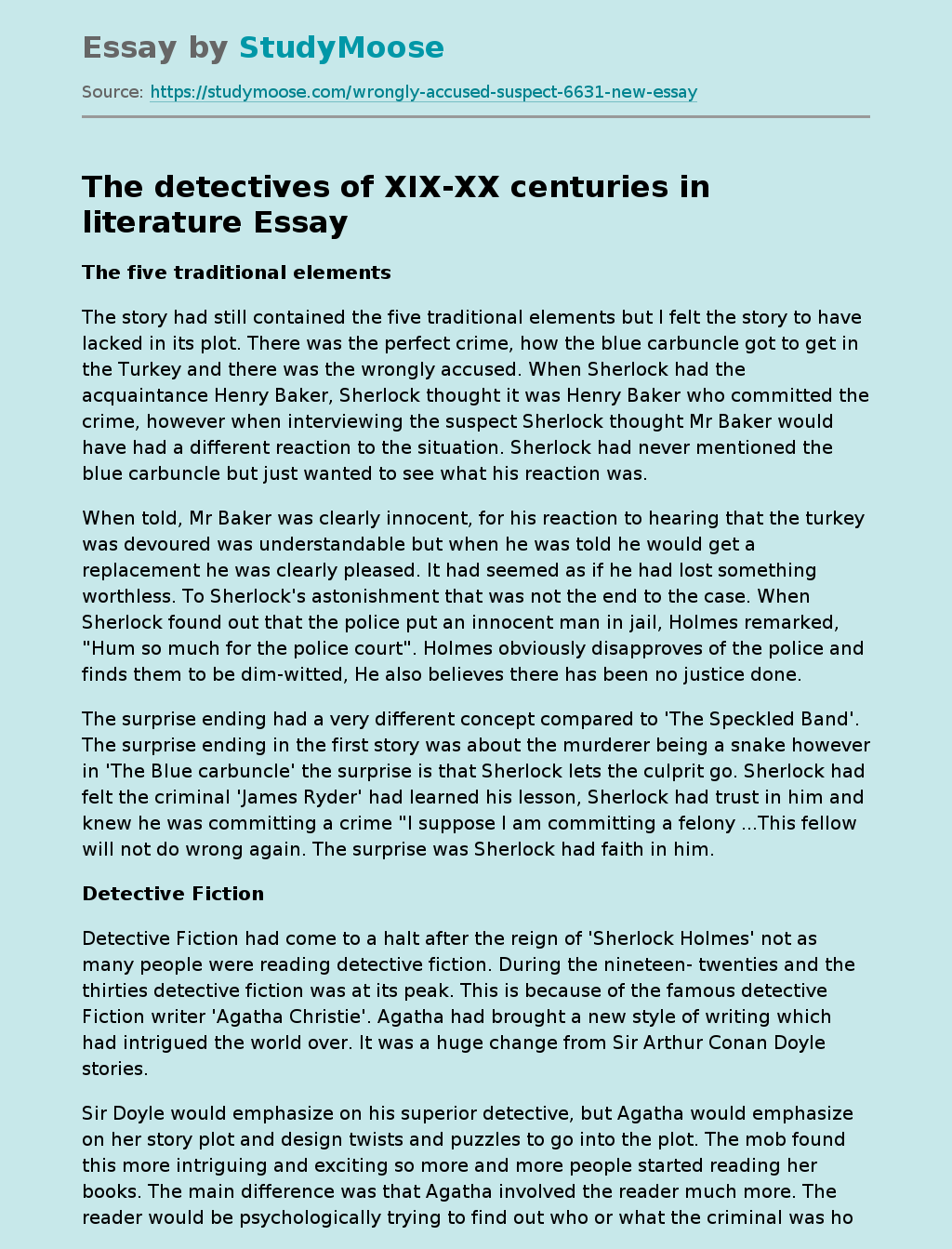