Many factors can cause stress in our communities. These factors range from the result of violence in schools to the proliferation of social media tools, such as Facebook, Instagram, and Twitter. Stress affects people in different ways. Some ways can drive a community apart while others can bring them together. This paper will provide evidence to show it is possible for communities to take action, adapt to changes in positive ways and reduce stress.

Action can take many forms.

Action can be physical, verbal, or silent. In recent years, protesters took to the streets in opposition to the government bailout of Wall Street. The protesters assumed the name of the 99 Percent. The 99 Percent marched through the streets shouting down the Wall Street bankers, but their main weapon was not the megaphone, it was ‘silent occupation.’ Soon, this action became known as Occupy Wall Street. The goal of the Occupy movement was to show the wealthy bankers that they were not going to get away with their crimes and get a free handout from the taxpayers.

As a result, the politicians on Capitol Hill listened and began to implement a wider set of reforms and consumer protections.

One of those ways is to leverage current forms of technology. Social media tools like Twitter have the power to spread news quickly. Community groups can use Twitter to organize grass-root actions, such as marches, and to keep members connected by quickly sending updates and detailed meeting notes instantly.

Recently, a local community organized an effort to force their local government to reinstate a local sheriff who was fired due to their sexual orientation. The local movement shamed the city council and the sheriff was rehired within weeks.

Adapt to Changes in Positive Ways

It is possible for communities to adapt to stressors in positive ways. In my opinion, a person has the power to choose how they want to react to certain stimulus. So, if an individual has this power, why not a community? For example, if someone were to spit on the local mayor, this technically constitutes an assault. The mayor could call the sheriff and have the man arrested and jailed; however, the mayor could first try to talk with the individual to come to an understanding of the person’s issues. Afterwards, the mayor should have him arrested; otherwise, others may be motivated to follow suit with the spatter. The mayor demonstrated an act of compassion by choosing to talk and mostly likely earned a few points with the constituents. My point is that if one person can adapt positively to factors of stress, a community can choose to take action in positive ways as well.

Turning negative stress into a positive outcome can be challenging but not impossible. Communities can be very complex. One reason is that communities are comprised of many individuals, each with their own thoughts, values, and ethics. If an act of violence were to take place at a local school campus, some individuals might choose to hide and wait it out. However, others may believe the best action is to fight fire with fire and take the to the streets like vigilantes.

In my opinion, both of these reactions will lead to a great amount of stress because they are reactions based upon fear. A better way to react would be to put trust in the local authorities. The local authorities are better trained to handle crises. Another way to avoid or reduce stress would be to shut off the television or computer. Turning off these devices would minimize the stress of constant news updates that would only serve elevate fear.

In closing, this paper set out to address the issues communities face when faced with negative factors. School violence and stress caused by social media are common issues dealt with across the country. How we choose to react to these issues can affect our local communities for the good or in bad ways. Parents could decide to pull their children out of school. Angry fathers could act out violently and take matters into their own hands. Constructive alternatives are available.

The local police department can invest in better infrastructure and communications networks. They can also improve communication with the surrounding communities to build confidence in their ability to respond during emergencies. Communities can build a stronger bond by choosing to look at stressful factors in positive ways and increase their understanding of how they can prepare and respond during periods of high stress. 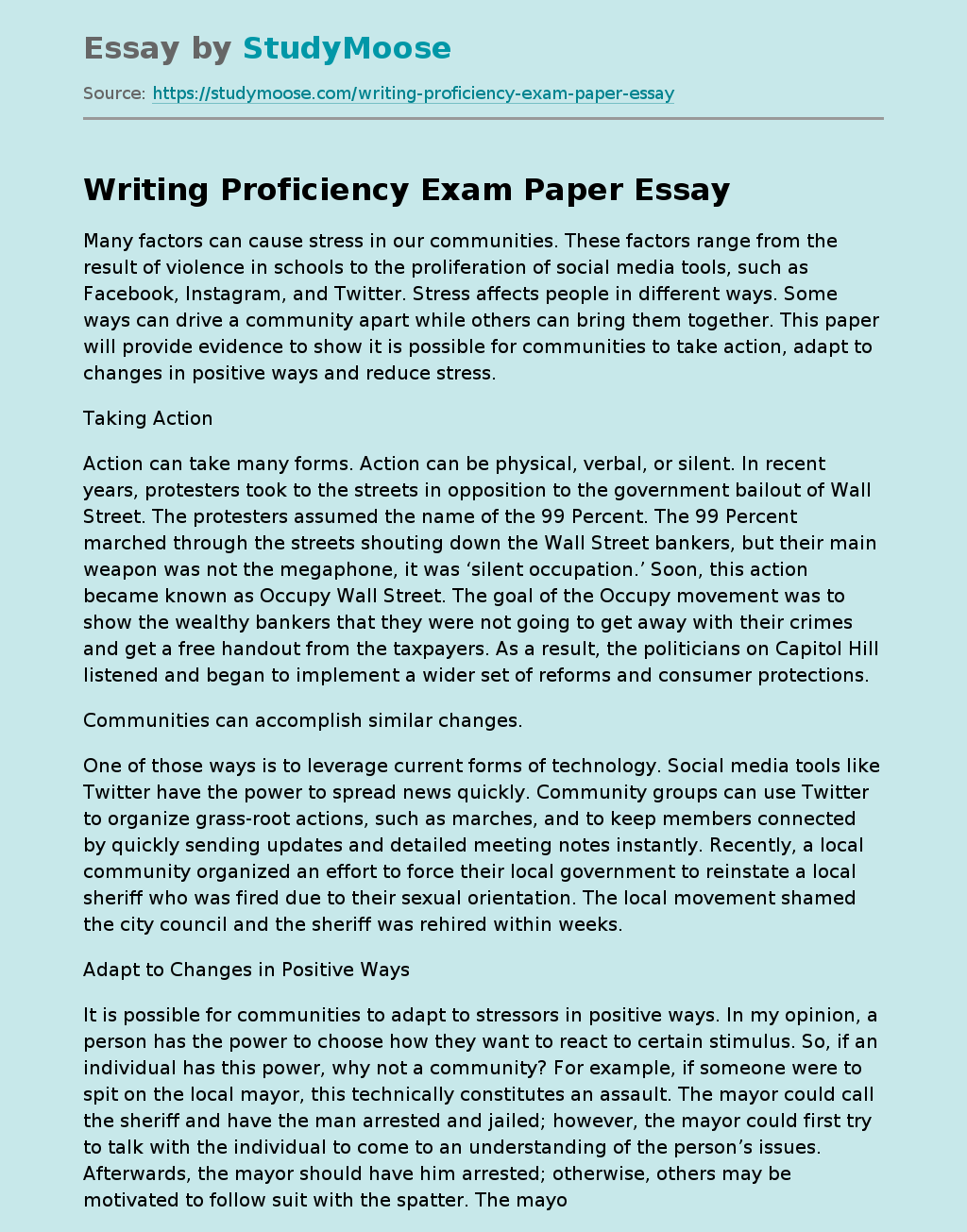