Write a short essay which explains one-to-one interaction and a group interaction during the work experience that you participated in.

For instance when communicating with kids between the ages of 3 and 5 the health care professionals have to ensure that they have good communication skills to get the message across and good listening skills to receive the message that the children are sending.

Don't use plagiarized sources. Get your custom essay on
“ Write a short essay which explains one-to-one interaction and a group interaction during the work experience that you participated in. ”
Get custom paper
NEW! smart matching with writer

For example a 3 year old child wants to use the bathroom but due to the fact that the child is unable to speak properly the health care professionals has find out what is the message that the child is sending across by speaking very slowly and by asking the question in a clear and precise way so that the child can understand.

Feedback was then given and actions taken because the child was then escorted to the toilet which states that the message was clearly understood.

This was a clear example of Argyles stages of the communication cycle which consisted of an Idea, Coding, Send, Received, Translate and feedback. In the nursery there was also group interaction taking place among the staff and the children. An example of the group interaction that took place was when the children were called in to have their lunch. They were all instructed to sit at the table where their picture is so that they could have their food. They all understood the instruction which was given because they all came toward the lunch area and starting sitting down at the table. There was some conflict between the

children who wanted to sit next to their friends rather than in their sit but the nursery assistant made them go their designated sits as some had different needs from the other and so the sitting position would better able them to care for their needs. After all the children understood that they should all be in their proper sits before the food could be shared they all went to their table and the meal was served. The children all had their meals over some talking although they were advised that it is not safe. This scenario I have just given is a perfect example of Tuckman’s group formation Theory where Forming, Storming, Norming and performing took place.

Write a short essay which explains one-to-one interaction and a group interaction during the work experience that you participated in.. (2016, Apr 17). Retrieved from http://studymoose.com/write-a-short-essay-which-explains-one-to-one-interaction-and-a-group-interaction-during-the-work-experience-that-you-participated-in-essay 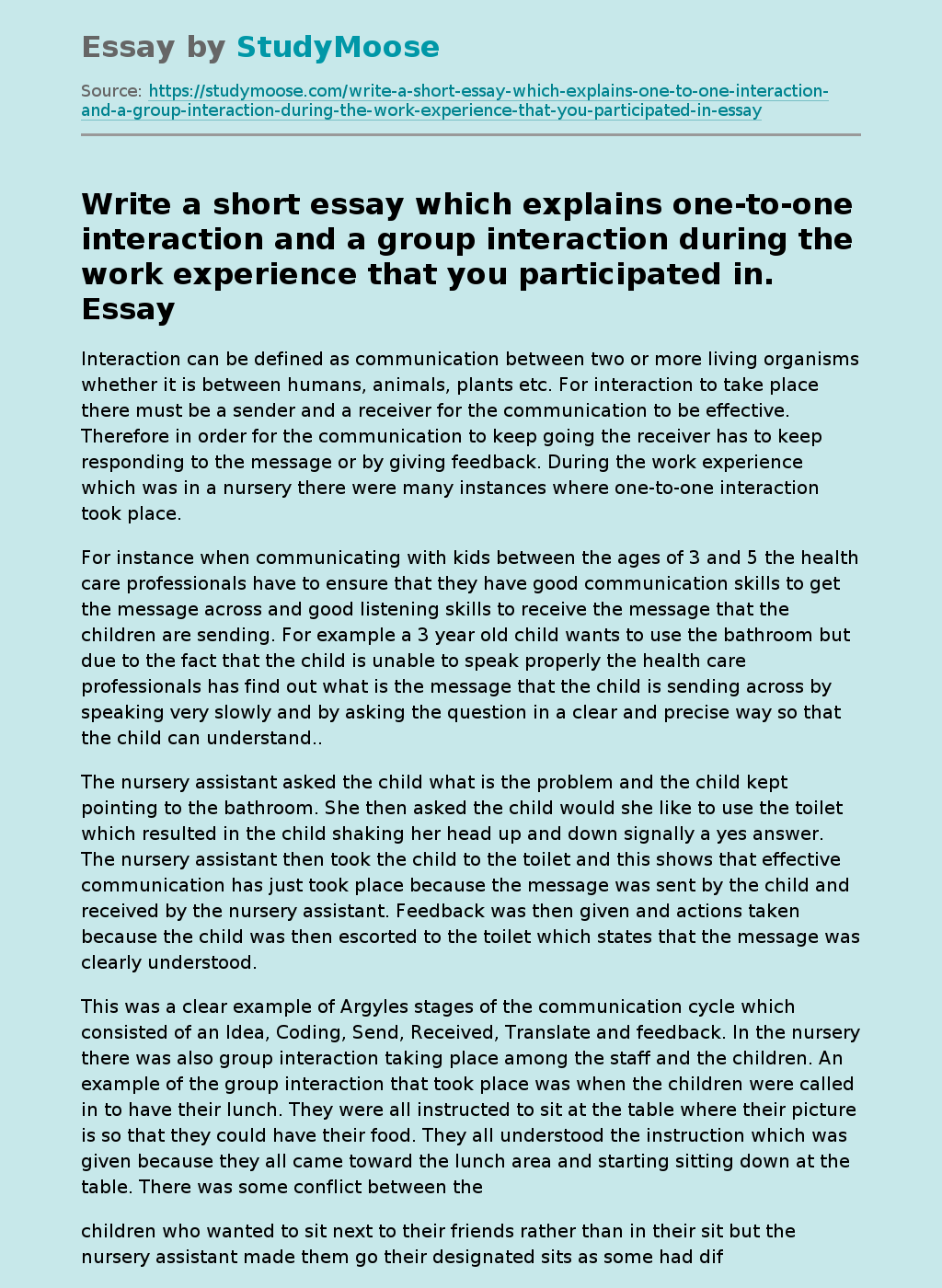