Would A Gun Ban Be the Right Path?

There are many growing concerns these days about how to stop gun violence. Tougher gun laws or confiscation come to mind, but some people believe that keeping guns legal is a better alternative. There are many people that vehemently protest private ownership of firearms, while others maintain that owning firearms makes you more secure and is a deterrent against tyranny.

The proper way to combat gun violence has been a largely discussed topic in the US. One consideration is if confiscation will cost the taxpayers more than keeping guns legal.

Don't use plagiarized sources. Get your custom essay on
“ Would A Gun Ban Be the Right Path? ”
Get custom paper
NEW! smart matching with writer

Some people fear that the crime rate will rise when guns are confiscated while others are confident that it will decline. Many people argue that gun confiscation would be an infringement on our rights as US citizens.

The price we would pay as taxpayers to confiscate guns after a ban should lower crime rates and be worth it over time financially. If a gun ban was put into place in every state, we would be paying for the buyback programs and any other method of gun confiscation.

While one would think this is a cost-effective strategy, most people would not just bring their guns in willingly. Enforcing a gun ban would take an enormous amount of time and money that our country just does not have. On the other hand, keeping gun rights and not organizing a task force to remove guns would be cheaper.

It may come as a shock, but the banning of guns does not always seem to help.

While we think confiscating guns will solve the problem, we see this isn’t the case. In “Making Guns Less Available Does Not Reduce Gun Violence,” John R. Lott explains:

Great Britain banned handguns in January 1997. But the number of deaths and injuries from gun crime in England and Wales increased 340% in the seven years from 1998 to 2005. The rates of serious violent crime, armed robberies, rapes, and homicide have also soared. The Republic of Ireland and Jamaica also experienced large increases in murder rates after enacting handgun bans.

So, with reading this, a person can see that the banning of guns may not be the answer the US is looking for. Violent crimes seem to be lower in places without the gun bans intact. Again John R. Lott makes note:

In early 1977, a gun ban went inti effect in Washington D.C. Ever since the ban went into effect there has been just one year that the murder rate was lower than it was it was before the ban. Murder rates were declining but after the ban they rose. The murder rate dropped from 37 to 27 murders per 100,000 people in the previous five years before the gun ban. The murder rate rose back to 35 within the first five years after the gun ban went into effect. In comparison to other cities murder rates, Washington D.C.’s rose exponentially. Washing D.C.’s murder rate was ranked first and sometimes second among the largest 50 murder rates in the United States for 15 years out of 29 years that we have statistics for after the ban. Washington ranked fourth in the other four years. On the other hand, its murder ranked 15th in 1976. Washington’s murder rate rose quickly. It even rose faster than neighboring Maryland’s and Virginia’s or the U.S. rate all together.

In the article “A Land Without Guns: How Japan Has Virtually Eliminated Shooting Deaths,” Max Fisher states, “In part by forbidding almost all forms of firearm ownership, Japan has as few as two gun-related homicides a year.” He went on to explain the process in which someone in Japan can own a gun:

If you want to own a gun in Japan, there are many requirements. You will need to attend an all-day class and successfully complete a written test. These tests are only offered once each month. It is also mandatory that you successfully complete a shooting range class. After completing all that, a mental health evaluation and drug test are required. Once you get the results of these tests you will be required to present them to the police. Last of all, you will have to take a background check showing that your criminal record is unblemished, and you are not associated with extremist groups. Once all this is complete you can now legally own a shotgun or air rifle. At this point, you must keep your firearm locked in a separate location than your ammunition and provide documentation on the exact location of the gun in your home to law enforcement. Keep in mind that you will be required to allow police to inspect your firearms annually and retake the class and written exam once every three years.

With such strict gun laws in Japan, the country has almost zero-gun related deaths and is probably one good example of strict gun laws working for the good of its people. When a person trades freedom for security, often times they receive neither. This has been proven with so many other countries where the civilians gave up their rights to gun ownership and it went horribly wrong. In the book Death By Gun Control Aaron Zelman and Richard W. Stevens provide the following information:

In 1915-1917 Ottoman, Turkey’s government put a ban on possession of guns and 1-1.5 million Armenians (mostly Christians) were killed as a result. In 1929-1945 the Soviet Union placed a ban on guns with severe penalties for keeping the firearms, this resulted in 20 million Political opponents and farming communities being killed. In 1933-1945 Nazi Germany and Occupied Europe placed stricter laws in place with a ban on possession the resulted in the deaths of 20 million political opponents, Jews and Gypsies. In 1927-1949 China, Nationalist put a government permit system in place with a ban on private ownership this allowed for 10 million deaths of political opponents, army conscripts, and others. In 1949-1952, 1957-1960, 1966-1976 China, Red 20-35 million political opponents, rural populations, and enemies of the state were killed after much stricter gun laws were implemented.

In 1960-1981 Guatemala began to register guns and owners with licensing with high fees, they prohibited carrying guns, and put bans in place on guns and sharp tools with the power of confiscation. This caused the deaths of 100,000-200,000 Mayans and other Indians. In 1971-1981 Uganda put in place laws for mandatory registration on all guns and owners and warrantless searches with confiscation powers this caused the death of 300,000 Christians and Political enemies. In 1975-1979 Cambodia (Khmer Rouge) put into place stricter gun laws; then 2 million Educated persons and political enemies were murdered. In 1994 Rwanda began to register guns, owners, and ammunition; the owners also had to justify the need to possess the gun and as a result 800,000 Tutsi people were murdered.

With all this being said, maybe this would have still happened even if gun laws had not been enacted, but that is just speculation. The strict gun regulations made the murders of these people much easier.

After looking at this information, a person can see the importance of the right to own a gun and also see where someone is coming from that opposes gun ownership. With this being said, history has a way of repeating itself, and very few countries that allow gun control come out peacefully. It is important for the United States to consider a closer look at current gun regulations, but an out right ban may prove to be catastrophic.

Would A Gun Ban Be the Right Path?. (2019, Dec 01). Retrieved from https://studymoose.com/would-a-gun-ban-be-the-right-path-essay 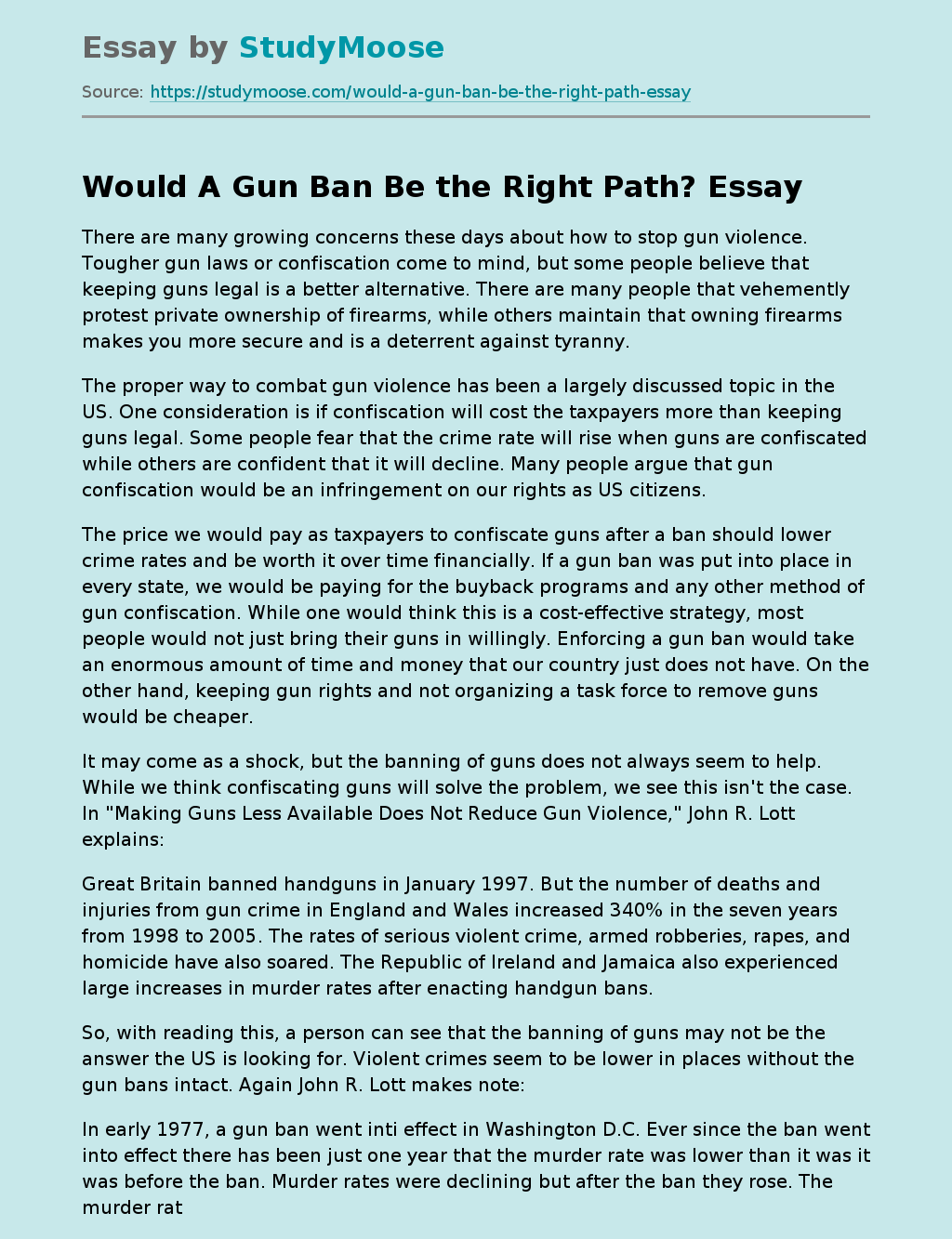