The dramatic monologue is a poetic technique which allows poets to create and develop a persona, who addresses the reader through the telling of a story through their perspective, portraying their inner thoughts and feelings in the process. This poetic technique is used by many well respected poets, including Carol Ann Duffy, a feminist poet whose “World’s Wife” anthology consists of poems in which this technique can be found. The aim of this essay therefore, is to look at how effectively Duffy makes use of the dramatic monologue in this collection, taking the poems “Mrs Midas” and “Frau Freud” as examples.

Don't use plagiarized sources. Get your custom essay on
“ The Worlds Wife anthology ”
Get custom paper
NEW! smart matching with writer

Upon glancing upon the names of these poems and the content within them, one picks up on two things. Firstly, both poems make reference to the names of male figures that are historically famous, with the first making reference to the famous Greek myth of King Midas, whilst the second makes reference to the famous psychoanalyst Sigmund Freud. Another similarity that can be picked up on between all both poems (through their respective titles), is the fact that Duffy has used the dramatic monologue to create female partners for the male figures mentioned above.

Each wife’s purpose is to re-tell the individual stories, ideals and situations associated with their husband’s from their perspective whilst acting as their personal critics. One can assume therefore that, Duffy’s main purpose through the use of the dramatic monologue is to give the other side to these famous stories, implying that there is more to them then what has been recorded in history and ultimately accepted by society, whilst at the same time giving each of them a modern setting through her choice of diction to make them accessible to the reader.

This theme of revisionism and the power of the female voice, is recurrent throughout the entirety of the World’s Wife collection. In the first poem “Mrs Midas”, Duffy uses the dramatic monologue to present Mrs Midas’ own account and complaint, of the events leading from the moment she realized her husband’s new found ability, and how his own self-absorption and greed with materialistic things cost him their marriage (in the original myth there was no mention of King Midas’ wife although it was shown that he had a daughter, thus this gives Duffy more of a reason to create the character of Mrs Midas).

The structure of the poem is that of eleven sestets, which helps Mrs Midas break down the story into a steady progression of events in a modern middle class household, to make the poem more accessible. In the beginning of the poem, Duffy makes clear Mrs Midas’ utter shock and disbelief at the idea of her husband having a wish granted. This is shown through her effective use of rhetoric, whilst simultaneously making use of double meanings in the following lines, “Look we all have wishes; granted, But who has wishes granted? “.

In the first half of the line, Mrs Midas shows her acceptability of the fact that all human beings have inner desires and wishes, and that the word “granted” here, acknowledges this fact. However the second half of the line seems to counter this and shows her condoning her husband for his selfishness, whilst at the same time questioning the sanity in having these inner desires and wishes being realized. Thus it can be assumed here that Mrs Midas is portrayed by Duffy as believing that all fantasies should remain as fantasies, as having them transcend into reality could have unwanted and unnatural effects.

This line can also be said to warn of the future events to come which would lead to the end of the Midas’ marriage. Despite this new development however, Duffy manages to present Mrs Midas as retaining a sense of humor when referring to how Midas transforms their spare room into “the tomb of Tutankhamun”. This satirical comment enables the reader to visualize the depth of change that Midas’ touch has brought about, similar to that of an individual going from rags to riches. This mentioning of Tutankhamun, an Egyptian pharaoh, also enables the reader to imagine the vibrant glamour of the room, now comparable to that of a king’s throne room.

Later though, Duffy begins to display to the reader the slowly deteriorating state of the marriage as shown through the lines “Separate beds”, in the beginning of the seventh sestet. These words enable us to visualize the rift that has been created due to Midas’ new ability to turn gold, as well as the gradual loss of intimacy it is creating. It is also interesting to note in this sestet, Duffy’s clever pun on the word “petrified”, with regards to Mrs Midas new found fear of her husband.

Mrs Midas can be said to be have nearly frozen in fear of her husband whilst at the same time having narrowly escaped being petrified by her husband’s touch. Once again though, Duffy manages to preserve Mrs Midas’ sense of satirical humor and irony through the lines “the kiss that would turn my lips to a work of art”. This suggests that secretly, Mrs Midas would not mind being turned to gold, because at the very least, she would have many admirers. Unfortunately things become too unbearable for Mrs Midas, resulting in the physical separation of the couple.

The development of this inability to cope is hinted upon, by the following line “My dream-milk burned in my breasts”. The use of the metaphors “dream” and “burned” by Duffy, symbolizes Mrs Midas’ passionate desire to have a child and tend to it, however she realize that this desire of bearing a child will be nothing short of a fantasy now. Some critics make the arguement that Duffy also plays a pun on the word “burned” here, with the second meaning referring to her growing bitterness towards her husband for his selfish actions.

It can also be said that this is the first time Mrs Midas really gives the reader insight into her deeper thoughts and emotions, whilst at the same time openly displaying her sexuality. Duffy then portrays Mrs Midas as being the one who initiates this separation through the lines “So he had to move out”, which presents Mrs Midas as an individual who will not play the role of the stereotypical wife when important decisions need to be made. The emotional ties between Mrs Midas and her husband are eventually cut , despite the formers’ attempts to maintain what little remnants are left off their waning relationship.

The lines “At first I visited”, portray Mrs Midas initial efforts to make things work (an action that is more commonly associated with men), however Duffy then presents Mrs Midas’ resolve as diminished through her description of Midas as “thin” and “delirious”. These words clearly present Midas as something similar to a wild, stray animal that has lost what little sanity it had previously, and it is through this description that the reader is shown the hopelessness of the situation.

In the end, the reader finds that Mrs Midas has not completely cut off her feelings for her husband as shown through the final lines “I miss most even now, his hands, his warm hands on my skin, his touch. These lines are rather ironic, as while Mrs Midas is aware of the danger of his now tainted touch, she cannot cast of her emotional desire and longing as a woman for a physical display of affection from him. Peter Cash (2002), also reiterates this point stating “The ultimate irony is that Midas possessed a magic touch all along: namely, the physical touch which had the power to transform her into a loving wife.

There is also irony in the description of Midas’ hands as warm, when everything he touches now turns into cold, lifeless gold. In the second poem “Frau Freud”, Duffy uses the dramatic monologue in creating the persona Mrs Freud, who can be seen to be presenting a case to an audience of fellow feminists, in what seems to be a rally regarding the penis (which can be considered the symbol of male sexuality), using her own marriage with the great psychoanalyst Sigmund Freud (from whom came many theories on male and female sexuality) as an example. Thus throughout the poem it can be assumed that marriage and sexuality are the major themes. 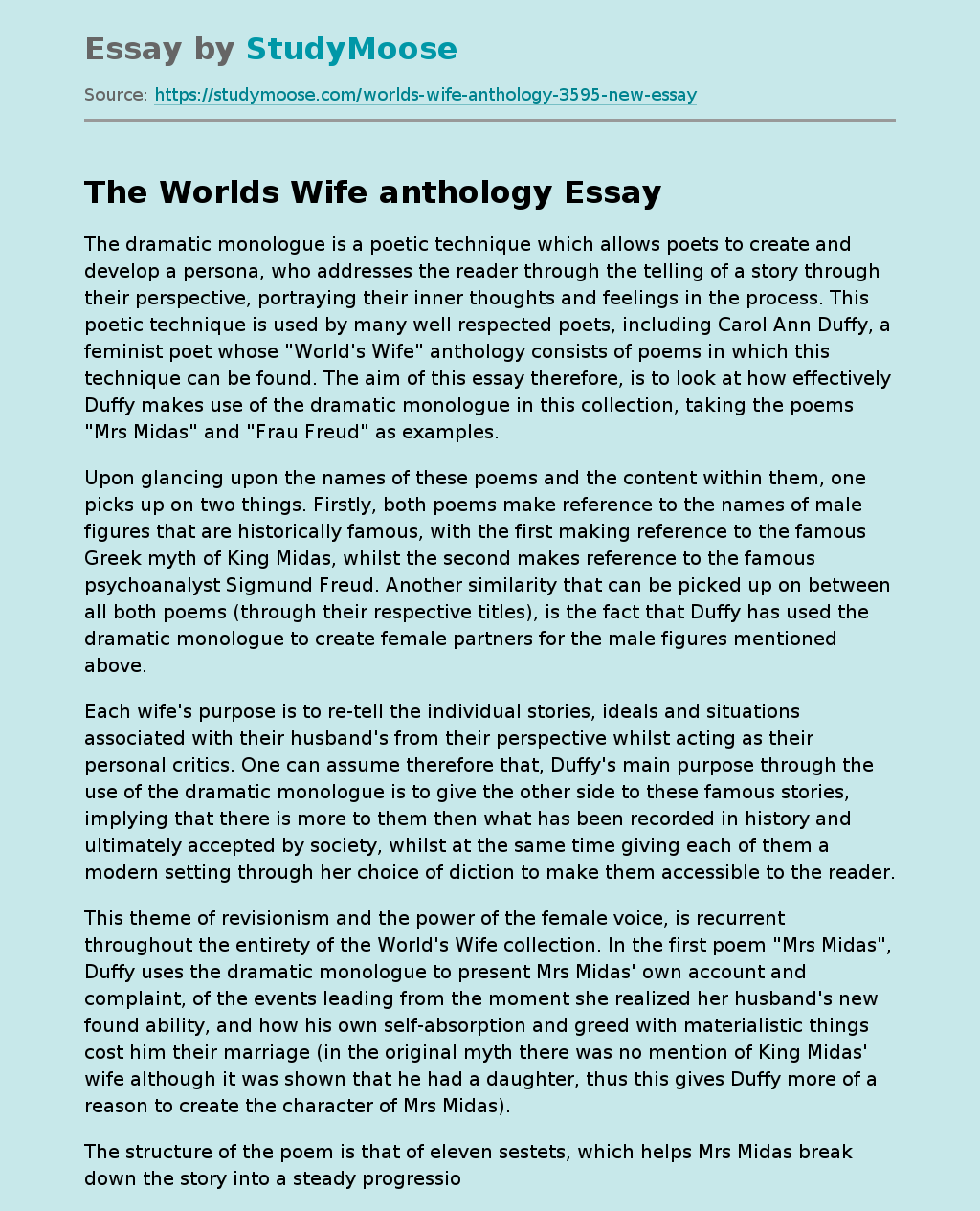