Don't use plagiarized sources.
Get Your Custom Essay on World War I Essential Questions Just from $13,9/Page

The Emergency Quota act of 1921 and the Immigration Act of 1924 severely limited immigration and was taken from the census of 1890 rather than 1910, because 1890 was a huge immigration year. It was the worst for the Japanese. The main reasons for isolation was due to anti European feelings, immigrant labor that lowered wages, the need for skilled workers and radical political movement and beliefs such as socialism, communism, and anarchism which were usually known as the Red Scare.

3. Why was immigration which had existed for many generations, seen as such a great threat to American identity and culture in the prosperous 1920s? America was always seen as a country where it would be safe for immigration and immigrants from Europe to come to make a living.

While immigration had always been open for generations, in fact, since the United States was born, people started to resent immigrants because they started to take jobs away from normal citizens, and also because of just plain racism. People wouldn’t like Japanese, Chinese, Italians, Irish, etc. As for assimilation, many people come to this country with no intention of ever becoming Americans. They want to be known as Americans. A lot of the immigrants didn’t want to pay taxes or learn English, except work at a really low wage and steal jobs.

5. How did some of the events of the 1920s reflect national conflict over social, cultural and religious values? The Red Scare reflected the fear of Americans which they had of communists infiltrating the US government. Sacco and Vanzetti’s arrest and execution made foreigners fear America even more, especially the anarchists.

This caused worldwide dispute over whether they were given a fair trial, or if it was just based on them being Italian and “anarchists”. The Scopes Trial reflected American fear of new ideas that looked like it challenged traditional religious values and the Biblical origin of man. The Teapot Dome Scandal reflected America’s want of wealth and their materialistic ways, which made people want material possessions at any price. The Flappers reflected America’s changing values of enjoyment, immorality, and worldliness.

6. How did the automobile and other new products create a mass-consumption economy in the 1920s? When the United States made the model T Ford, this was the first time the US found a way to mass produce a one color one size fits all reliable and at the time fashionable Model T. Thomas Edison also invented a major thing that many people just had to get to go into the next millennium, which was the light bulb.

This new era destroyed the old way of light, which was the candle, and replaced it with an electricity consuming item that was really useful. Also, there was George Washington Carver, who was a Botanist and a Chemist. He established an official industrial research center in both Alabama and Iowa. Carver was able to make legumes into useful ingredients in medicines and materials for consumer use, like the peanut.

7. How did the new films, literature, and music of 20’s affect American values in areas of religion, sexuality, and family life? Were African American cultural developments fundamentally different, or were they part of the same cultural movement? The 1920s has been known for a long time as the “Roaring Twenties”. This was an era of first-time prosperity that was best remembered through the cultural artifacts made by its new mass-consumption economy. The new media erased the old values and helped to bring in a new set of values. You could argue that the movies and music, which was mostly jazz, encouraged people to take on more self-indulgent values.

8. In what ways were the twenties a social and cultural reaction against the progressive idealism that held sway before and during WWI? The 1920s were a time when people stopped being idealistic and started to just be interested in fun and getting ahead in money. Before WWI, there was a Progressive movement that was very idealistic. The Progressives were trying to change the world and “progress”, but after WWI, this idealism seemed to be gone, probably because the war was so bad.

People probably no longer thought they would be able to change the world and just wanted to turn their attention to having fun. Because of this change, the ’20s were a time of fun and materialism. People were getting rich because of the stock market boom. Many were enjoying themselves with the new movies, abundant amount of cars, and the exciting new music, like Jazz. They were coming to have different values which emphasized having fun. 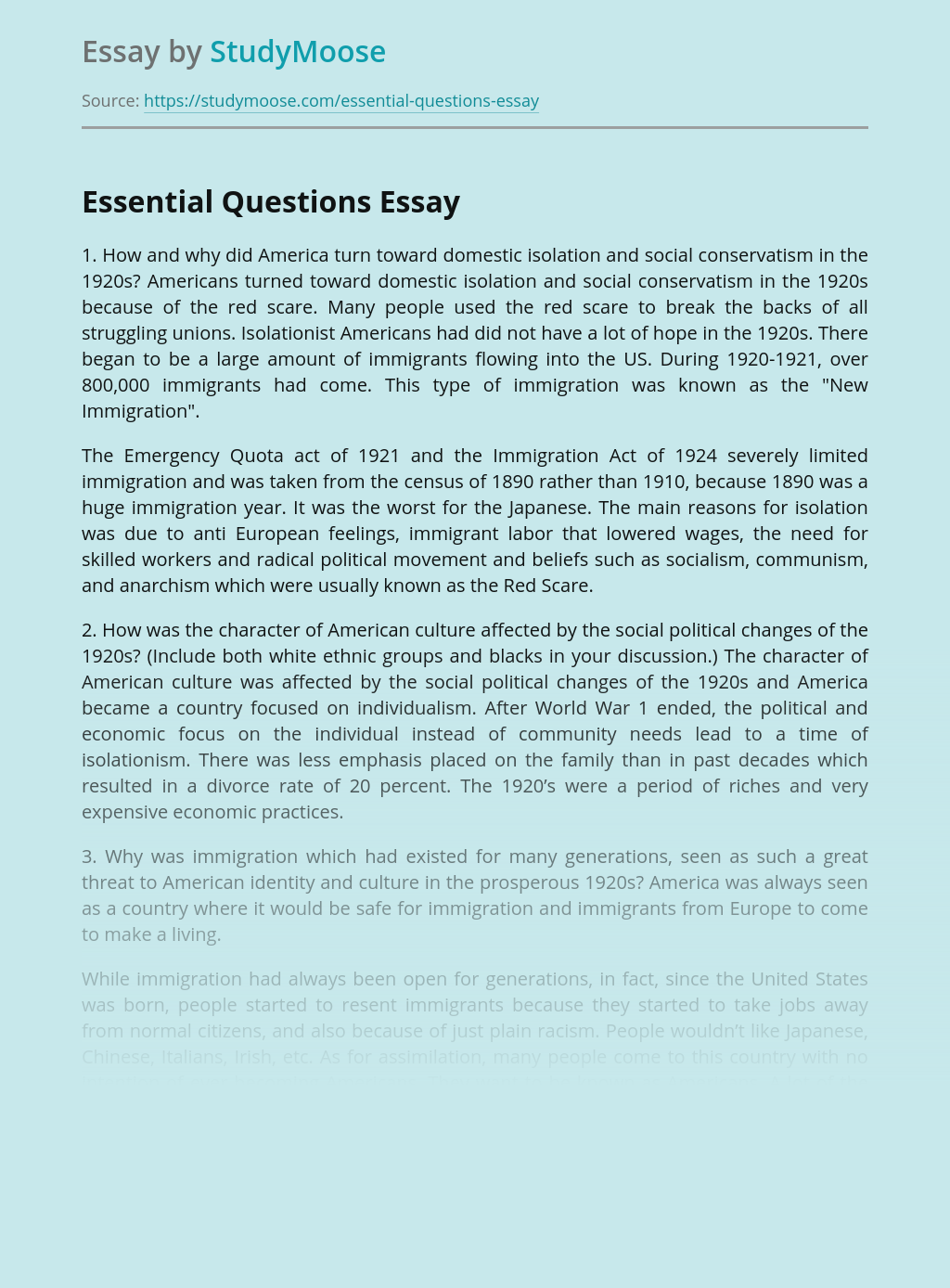 Importance of the Humanities

There has been much debate about the importance and benefits of funding the humanities in school. Many people are of the view that the study of the humanities is a waste of time and that more money and effort should be expended on teaching the STEM disciplines (science, technology, engineering and mathematics). On the other...

Scholars differ on where the Cherokee subculture came from and when they arrived on their traditional lands in the Southeast. The archaeological record of human occupancy of the Southeast goes back to at least 10,000 B. C. (Muller, 1978, p. 283; Canouts and Goodyear, 1985, p. 181), but this does not mean the Cherokees, or...

Get Essay
Difference of Cultures in Bend it Like Beckham

All cultures have different ways of showing respect and how there life is. In Bend it Like Beckham director Gurinder Chadha shows us the Indian life with the character Jessminda. Jessminda’s dreams are more important than her culture so she does not want to be the typical traditional Indian girl her parents want her to...

﻿Pilot as a job

Pilot – that’s a dream job for every child and pilots are treated like demigods. Everyone aspires to fly high in the sky like birds. Though we have the commercial airlines as an attractive and lucrative career, to fly for the Air force is what everyone desire. Not only is it a matter of pride...