Categories: BuddhismJainismReligionRite Of PassagesWorld
Download paper
Download
Essay, Pages 6 (1327 words)
Views
237
What makes studying basic religions a challenge for scholars?
Lack of archaeological evidence/varying interpretations
How do people use magic in ancient religions?
to control nature to either benefit themselves or harm others
The ancient Chinese traditions of heating a tortoise shell and interpreting its cracks is an example of the basic concept of ________.
divination
Basic religious attitudes toward ancestors can be described as _________.
Dread/flattery
The two primary sources of information about basic religions are archaeology and __________.
Contemporary basic religions
Neolithic societies erected mysterious stone monuments known as __________.
Don’t waste time
Get a verified writer to help you with World Religions Midterm
Hire verified writer
$35.80 for a 2-page paper
Megaliths
The presence of animism as a religious force in contemporary human life is evidenced by the modern Deep __________ Movement.
Ecology
Of all the rites of passage used in basic religions, the one given the most attention is the rite of passage from __________ to __________.
childhood; adulthood
A __________ is an act, person, or place to be avoided to prevent the spirit world from releasing harmful consequences.
taboo
To the traditional Native American, sickness is caused by __________.
(a foreign object) spirit
Which of the following best describes Native American religions?
animism
What is a medicine bundle?
a source of spiritual power made from animal hides and bones, plants, and minerals
The vision quest is a __________ by which a young person seeks __________.
ritual; a vision from the spirit world
According to Native American belief, the land of the dead is often portrayed as __________.
a diminished plane of earthly existence
__________ have appealed to Native Americans by telling them that they are children of the lost tribes of Israel and that Jesus preached in the Americas after his resurrection.
Top Writers
Academic Giant 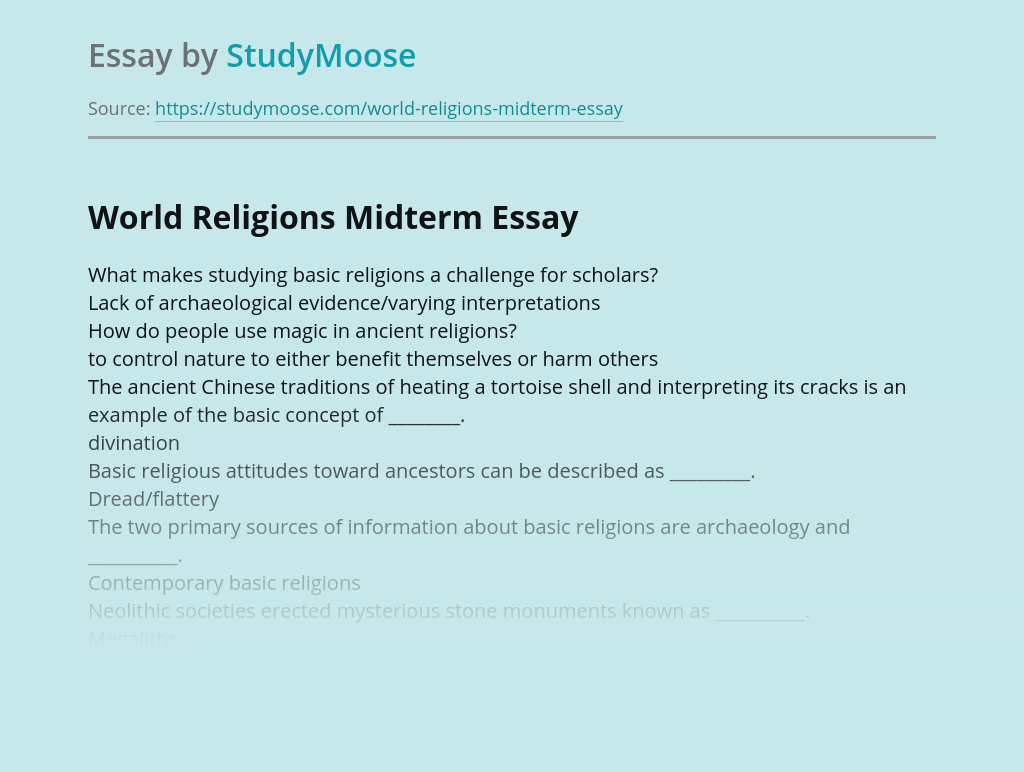