Since 1995, on 16 September each year, the International Day for the Preservation of the Ozone Layer is celebrated. This date has been designated by the United Nations General Assembly in its resolution 49/114, to commemorate the signing of the Montreal Protocol on Substances that Deplete the Ozone Layer. This commemoration around the world offers an opportunity to focus attention and action at the global, regional and national levels on the protection of the ozone layer.

All Member States are invited to devote this special day to promotion, at the national level, of concrete activities in accordance with the objectives and goals of the Montreal Protocol and its Amendment.

Turn in your highest-quality paper
Get a qualified writer to help you with
“ World Ozone Day ”
Get high-quality paper
NEW! AI matching with writer

The Ozone Layer describes the protective layer of naturally occurring gas, comprised of three atoms of oxygen found about 10 – 50 km above the earth’s surface that protects us from the harmful ultraviolet radiation or UV-B rays of sun.

Scientist in the 1970’s discovered that the layer was thinning as a result of the release of CFC’s, consequently, the Ozone Hole developed.

In 1985, nations around the world convened at Vienna in an attempt to develop a framework for co-operative activities to protect the Ozone layer. This signed agreement became known as the Vienna Convention for the Protection of the Ozone Layer.

The UNEP is monitoring compliance with the programmes of the international treaties aimed at eliminating the production and use of ozone-depleting substances, including chlorofluorocarbons (CFCs), used as industrial refrigerants and in aerosols, and the pesticide methyl bromide. Specifically, developing countries need to focus on eliminating the use of methyl bromide as an agricultural pesticide and they must halt illegal trade in CFCs.

More than 130,000 new cases of melanoma are reported around the world and some 66,000 people die from skin cancer every year. 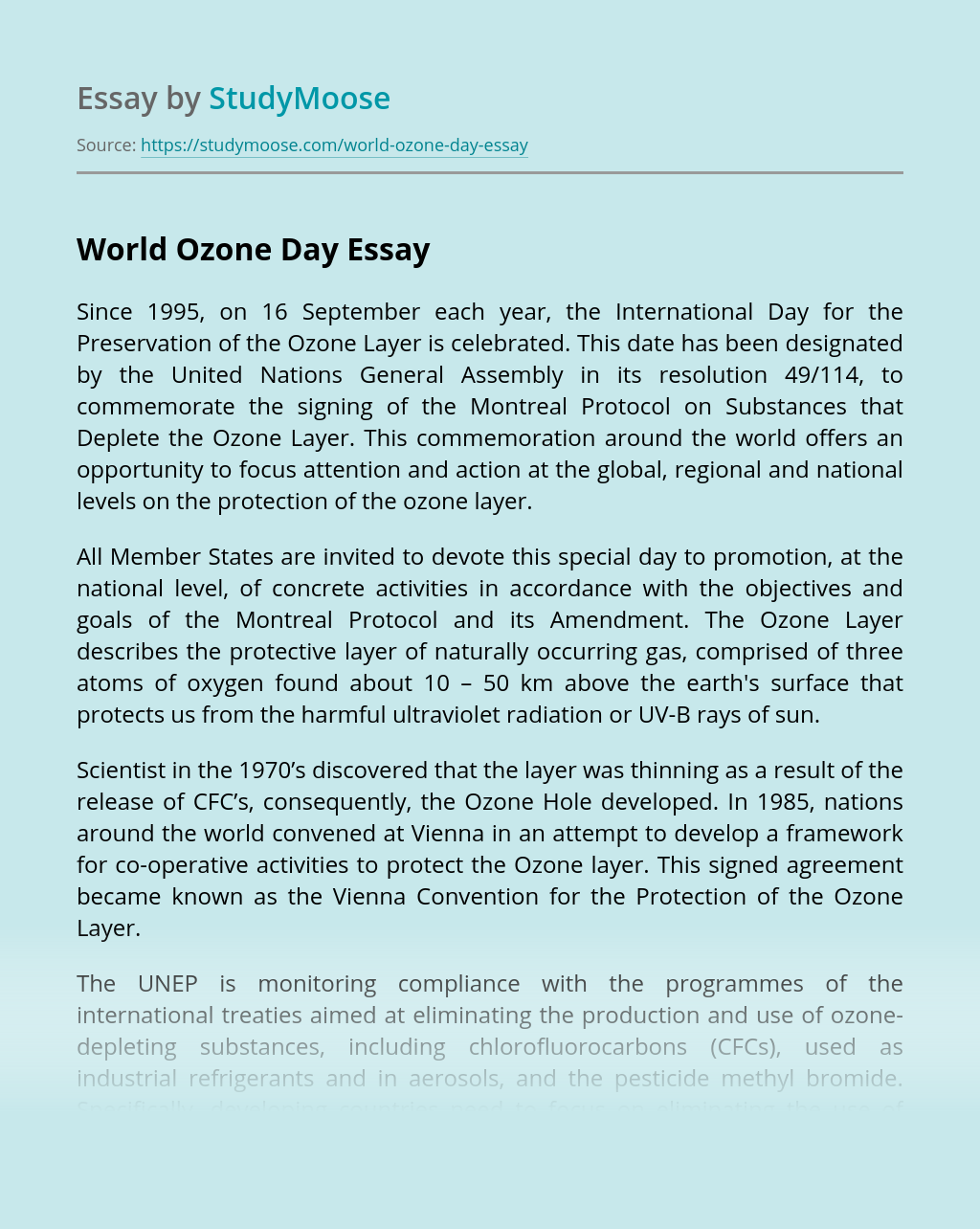 Turn in your highest-quality paper
Get a qualified writer to help you with
“ World Ozone Day ”
Get high-quality paper
Helping students since 2015
Stay Safe, Stay Original