World of Warcraft or often called WoW by most, a massively multiplayer online role-playing game (Massively Multiplayer Online Role Playing Game or MMORPG) by Blizzard Entertainment. It has been massively successful and has exceeded the normal popularity of a role-playing title. The main reason for this is that it is very accessible and straightforward, and it is not difficult to play it. Even if you are completely new to gaming you shouldn’t have any problems getting started.

World of Warcraft is an enormously popular game that has experienced success beyond what anyone might have expected.

Don't use plagiarized sources.
Get Your Custom Essay on World of Warcraft Just from $13,9/Page

It has become a mainstream triumph and has widened the audience for its genre and for gaming in general. It has also had an effect on the game industry, and in many ways is a surprising and remarkable title. WoW perfects all the basics: create a character, enter a beautifully detailed fantasy world with unbelievable amount of variety to be discovered from dusty deserts to lush grasslands and spooky forests along with thousands of other real people.

How awesome is that?? Warlock, priest, rogue-there’s always the usual choice of classes and a few trade skills throne into good measure, but the most important choice you are going to make is which side are you going to take, the Horde or the alliance, the goodies or the baddies? Either way, when you create your character, you must make two decisions that profoundly affect how you will play World of Warcraft. One of these is your race; the other is your class.

A character’s race determines his overall look and also his faction (Alliance or Horde). Faction is important because only characters of the same faction can talk and cooperate with each other; other way around you will not be able to communicate or team up together with members of the opposite faction. Race is mostly a social choice. Alliance’s races consist of Dwarves , Humans, Elves ,Gnomes and Draenei opposing to the Horde’s set of races , from Goblins, Taurens, Blood Elves, Forsaken, Orcs and Trolls.

Your class, on the other hand, determines what your character can and can’t do. Each class offers a vastly different gameplay experience, so the best way to find out which class is right for you is by creating a few different characters to get a glimpse of what each class feels like. And of course, there’s also the class guide on this website. Class is mostly a gameplay choice.

You pick one race, choose a class and as you become more powerful, you’ll come in contact with opposing faction players and if you play on a PVP or ‘Player Versus Player’ server, you’ll have the chance to them- sometimes alongside with massive groups of cooperating players. Carry-out quests, collect ingredients, group with other players or just explore.. There’s never a dull moment in WoW. World of Warcraft is designed beautifully, and you will find it a pleasure to learn how everything functions and works.

The control system is sensible and makes good use of the keyboard and mouse. The game includes a camera that allows you to look around and have a full view of your environment. In general, it is a clear and comprehensible experience. World of Warcraft is a very entertaining game and is easy to play. Its strength is that you don’t need to have detailed knowledge or experience of the role-playing genre to enjoy it. Even though the game contains a large and detailed world you will not have a problem understanding it. This is a perfect game for any kind of player. 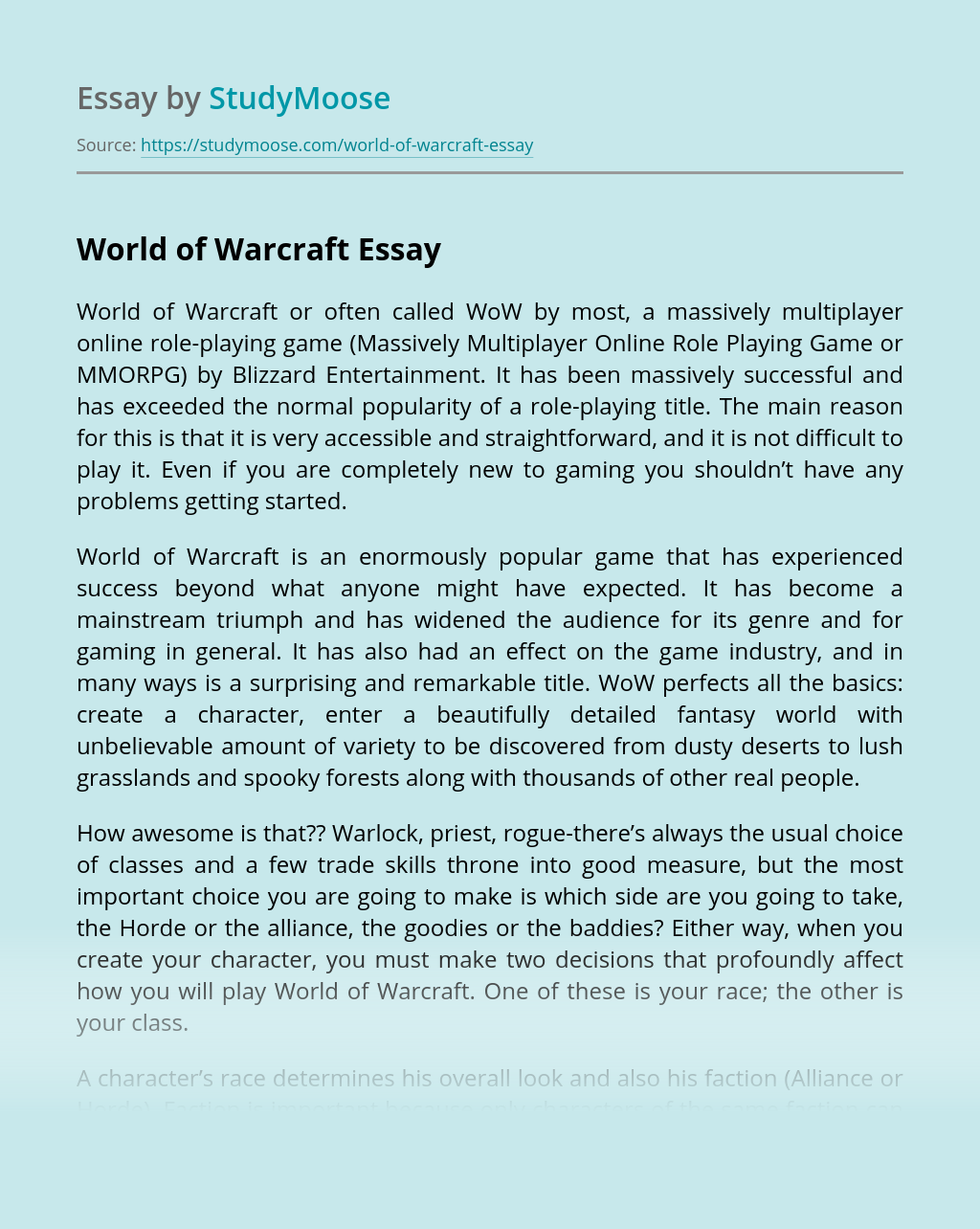 “Star Wars” was arguably the first in a new breed of high concept, high budget sci-fi action films. It was directed by George Lucas and originally released in only a few cinemas in 1977. However, the buzz around the film grew, and it is now one of the highest grossing films of all time, and...

"Genocide is the deliberate killing of a large group of people, especially those of a particular ethnic group or nation." (Genocide)

Introduction “In 1994 Rwanda experienced the worst genocide in modern times. The Rwandan Genocide was a genocidal mass slaughter of the Tutsis by the Hutus that took place in 1994 in the East African state of Rwanda. It is considered the most organized genocide of the 20th century. Over the course of approximately 100 days...

William Blake and Carol Ann Duffy both utilize powerful imagery to describe the “War Photographer” and “The Tyger”, making similar statements about them. In addition, both poems use vivid imagery associated with the theme of religion and war. The use of imagery by both poets emphasizes the parallelism between the “The Tyger” and the “War...

The Chinese joined the Koreans side and helped fight back against US troops. General MacArthur -To completely defeat the Korean and Chinese armies. -President Truman ordered for him to stop his assault on the Asian countries. -He persisted and was eventually fired because his arrogance cost them the battle. President Truman -To keep Korea from...

The Just War Theory is a principle of ethics followed in the military that originated from Catholic and Roman philosophy. The principle has also been put forward by international policy makers in the modern world in holding that conflicts should cater to the needs of political, religious and philosophical justice by following a given code...