Firstly, we are shadowed with the threat of nuclear war, where entire nations are at risk of being annihilated. There aren’t any extreme war cases as World War 2, but we hear of many acts of violence and threats of mass destruction.

Don't use plagiarized sources.
Get Your Custom Essay on World Dangers Just from $13,9/Page

These are due to terrorism and experimentation with nuclear weapons. We often hear of suicide bombers in Iraq and of nuclear weapon building in North Korea. This, therefore, indicates that today’s world is an increasingly dangerous one.

Secondly, natural disasters are on the increase. We are all aware of the recent earthquake disaster that occurred in Japan, and the massive destruction that it caused. Not to mention the thousands of fatalities.

Mans greed has led to the misuse of natural resources, which together with global warming, has resulted in the world experiencing an increase in occurrence of earthquakes, tsunamis, floods, hurricanes, and volcanic eruptions. It is foolish to think that this world is safe.

Thirdly, disease is another threat to the human race. The amount of incurable diseases, like cancers, heart diseases, strokes, diabetes, and Alzheimer’s, are rapidly increasing. In the United States, there are 321.9 deaths per 100,000 people, due to cancer. The pace of life has increased drastically, resulting in extra pressure on humankind. Hence, stress levels have risen, which have a negative impact on health. Due to time constraints, people are turning to the efficiency of fast food, which lack in essential nutrients, thereby compromising their health.

Fourthly, more crime exists than in the past. Those who watch and listen to the news will take note of criminal incidences that often take place, such as hijackings, robberies, murders, rape and kidnappings, especially in third world countries with poor economies, and high percentages of unemployment and poverty. People who lack basic needs, such as housing, sanitation, food and clothing, will resort to criminal practices, in order to fulfill these needs.

Lastly, and this is often linked to poverty, we have an increase in gangster activity. It’s usually the youth, searching for an identity and a place of belonging, who join gangs. Dangers concerning these are numerous. They range from fighting other gang members, to participating in thefts, gang rapes, drive-by shootings, or even murders. These crimes are often associated with alcohol and drug abuse. Clearly, where there are gangsters, the crime rate rises.

In conclusion, these are just some of the dangers that we face, and they prove that this world is an increasingly dangerous place. We don’t know when misfortune may befall us so we have to be cautious all the time. With the increase in nuclear weaponry, natural disasters and resource depletion we are spiraling into a dangerous state. The decline in general health standards and fast passed living riddled with increased crime and corruption are concerning factors. All these things I have indicated clearly indicate the increased danger on a global scale. 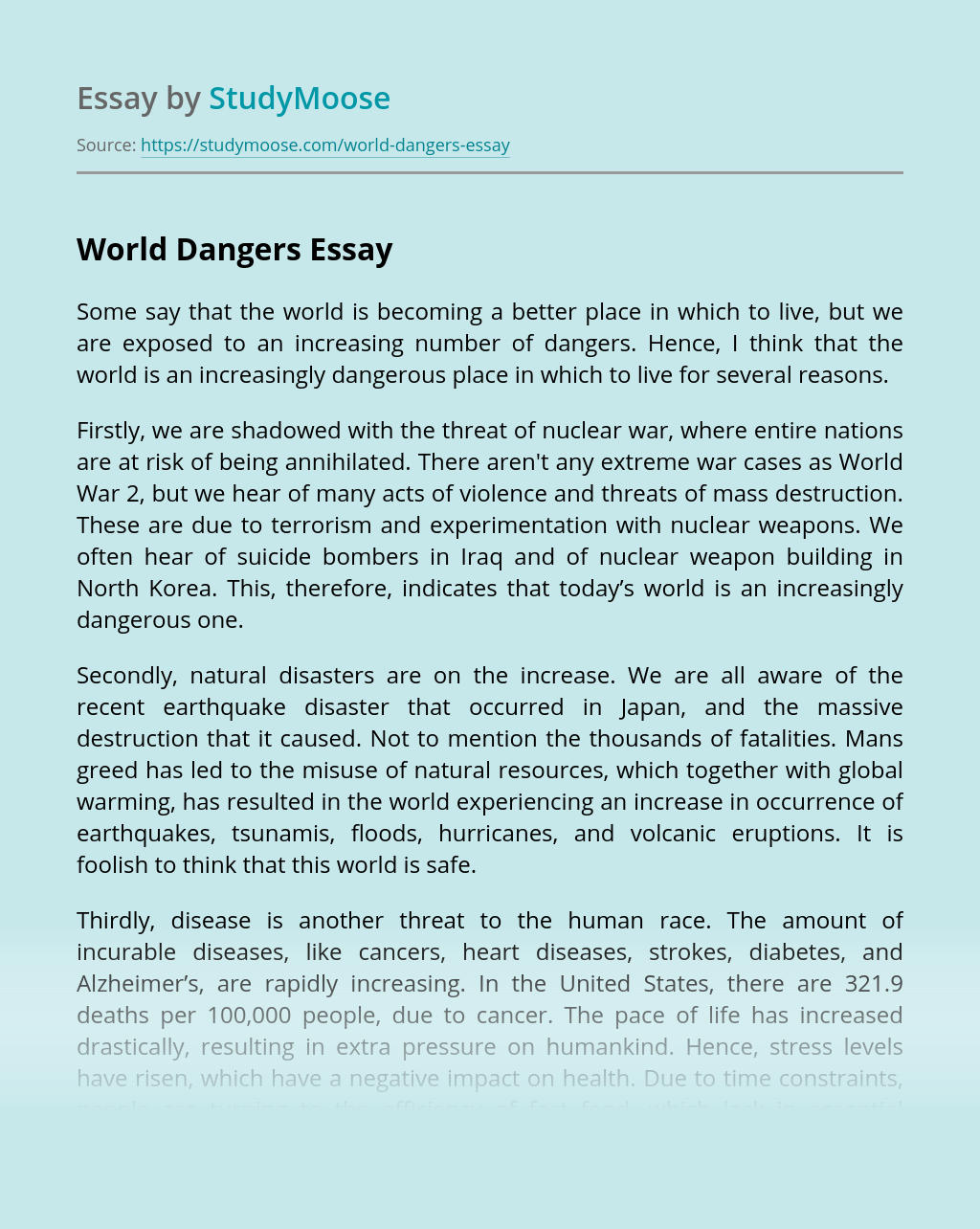 5 / 5 ( 1 vote ) We all go through different phases of advancement in our life, and a few of these stages are not as simple as others. At some time every kid needs to leave his/her childhood and mature, due to the fact that no matter how much you desire to, you...

States Ought Not Possess Nuclear Weapons

5 / 5 ( 1 vote ) “I call upon the scientific community in our country, those who gave us nuclear weapons, to turn their great talents now to the cause of mankind and world peace: to give us the means of rendering these nuclear weapons impotent and obsolete. ” Ronald Reagan spoke these words...

5 / 5 ( 1 vote ) The great Albert Einstein once said, “The unleashed power of the atom has changed everything, save our modes of thinking, and we thus drift toward unparalleled catastrophe”. As of 2019, there are approximately 13,860 nuclear weapons in total, which is entirely unreasonable. It is theorized that only 100...

5 / 5 ( 1 vote ) The Shifting heart is set in 1956 in the working class suburb of Collingwood, Melbourne. The play addresses racism treatment towards immigrants in post war Australia. Refugees were given jobs as labourers. The play is written as a response to the violent death of a polish immigrant, who...

5 / 5 ( 1 vote ) 8, on the surface this is a story of action, suspense, and adventure. At a deeper level it is about delinquency, war, and human nature. Try to sum up what the story says about human nature in general. The author of the story of The Destructors emphasizes on...

An Expert and World

5 / 5 ( 1 vote ) An expert and world renowned author on leadership, Dale Carnegie said “People work for money but go the extra mile for recognition, praise and rewards (Carnegie, 1936).” That statement rings true in both the personal and professional strivings of a human. It is simple to assign a person...