What Was Done Wrong:

If I were the CEO of the company, I would regard this as an unethical sales practice. In the end, the only thing that really matters is that Knox was deceptive with a customer. Obviously, relationship development is a key strategy in sales that many people use. The situation became much more complicated when Knox “ran into them” at a public Livestock show, which in and of itself if perfectly ethical. If it had been that he purposefully went to their house, it would have been an outright invasion of their privacy.

However, he was deceptive in his motives to develop a relationship with Carol Landry that would in turn get the attention of Dale. Ultimately, he treated the Landry’s as a means to get a sale, instead of actually building a true relationship with the customer that would last long term. This is proved by his lack of responding to Dale Landry’s calls at work and waiting out until Dale was practically begging to hear the sales pitch.

However, even more disturbing than Knox’s sales tactics were Jeremy’s irresponsible actions following the closing of the sale. In an era where no information is private, sending an email to the entire company praising the hoodwinking of a customer and encouraging other salesmen to do the same is just stupid. Samantha is right in wondering what would happen if the Landry’s read this. I have very little doubt that it would eventually reach them, considering how many people have it.

Not only that, but encouraging other employees to do the same is just asking for a scandal to happen that your company could not survive. Forget the ethics of it: I want Jeremy gone simply because I don’t want someone who does stupid stuff like that in any management position in my company. Without his email, the reprimand and the ethics issue could have been dealt with privately, and now Knox must be made an example of so other salesmen don’t resort to these tactics.

Finally, the incentive system that Jeremy put in place should also be looked at. If employees are driven to these kinds of lengths because of commission structures, that issue should be examined more closely.

What to do about it:

Knox needs to go in front of the ethics review board, and should ultimately be reprimanded for his actions, within the company. This will be accompanied by a message that the whole company will receive, stressing that any deception of a customer is inherently unethical. I am going to fire Jeremy on the spot, because he is a dumbass and I don’t want him working for me.

The code of ethics:

A change should be made to the code of ethics that reflects the message sent out in response to the situation. “Any deception of a current of potential customer is against the company code of ethics. Period.”

What to tell Armadillo:

I would immediately reach out of Armadillo and alert them of what happened, before there is a chance of them hearing about it in the embarrassing way of that email. Explain to them that Knox and Jeremy have been reprimanded and fired, respectively, and ask forgiveness. Offer to let them void the contact you had with them. If they like the product well enough to keep despite the deception, and he believes that my apology is actually sincere, then maybe we can keep their business, even though that shouldn’t be the goal of what we are doing. 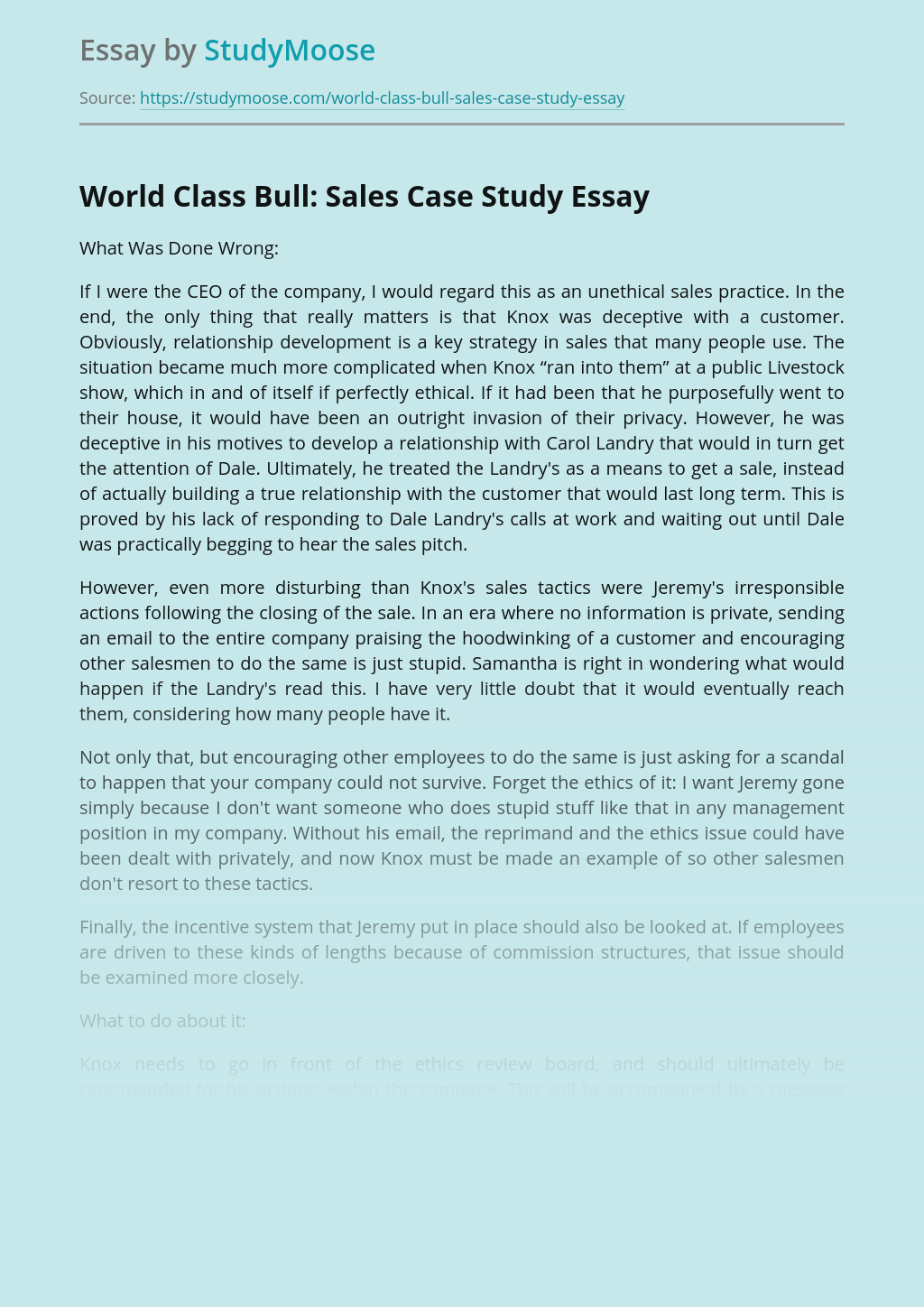