All large organizations have to deal with this issue adopting certain affirmative actions, strategic plan, leadership style and ethical programs and solutions.

Different facets of workplace discrimination affect business activities in dissimilar way. For instance, cultural discrimination generates negative feelings among workers since they develop personal prejudice and ingroup bias. Similarly, genderism leaves negative impact on working performance of different workers and they feel uncomfortable while performing their job because male candidates are preferred over female employer. The example can be taken from the organizations of third world countries where preference is given to male forces instead of female in most of the organizations.

The positive effect of assuming ethical policies in order to cope with such sort of situations can be seen from the example of World Wide Funds in which, human resource has been handled using absolutism theory of ethics that can also be referred to a non-consequential theory of ethics. Basically absolutism indicates the concept of absolute right and wrong which have been kept under consideration while making ethical policy of this organization. (Hibberd 2005) For this purpose, in all regions of the world, indigenous people have been hired to make business processes smoother. In this way, the workplace discrimination has been handled with extreme accuracy.

Comparatively, most of the organizations in developed countries like Nike and Toyota used to adopt utilitarian approach in order to deal with workplace discrimination. They used to employ theory of relativism or consequential theory which enables these organizations to deal with such issues using pragmatic solutions. Followers of this theory convicts that end justifies means and if the results are good, the entire action is good. (Fletcher & Childress 1966) So, keeping this concept in view, the authoritative style of leadership is assumed without contemplating any moral of ethical aspect which, though prove profitable for the organization yet the internal environment becomes ample strict which affect the psyche of the employers in one way or other.

If the causes of workplace discrimination are scrutinized, each facet of this issue would give ample sources that make this issue severe. However, separate study of each facet would enable us to understand why this ethical dilemma has become severe in today’s organizational environment.

The first and foremost issue within an organization is cultural discrimination. There might be several causes behind this kind of discrimination including cultural diversity, difference in language and lifestyle, diversity in education and traditions etc. due to these severe causes, successful organizations like WWF used to hire indigenous people and employ multicultural strategic plan for conducting its business activities. (Trivedi 2005)

The basic cause of gender discrimination is that women are considered weaker sex than man. (Gregory 2003) Management usually relies upon male employers rather than female and this thing causes severe issues within organization. Even in contemporary technological era, few organizations consider it futile to employ female candidates that generate this kind of discrimination.

With the advancement in business processes, researchers have also scrutinized the ways through which these problems can be handled. Here are some simple solutions which can be used for solving these business ethical issues with extreme accuracy.

While making strategic plan, management should not avoid the significance of developing an ethical policy. So, there must be code of ethics in all the organizations and employers would have to follow all the promulgated rules as well. This code of ethics should clearly mention that there must be no cultural or sexual discrimination within organization and all the employers should be dealt with equal rights on the basis of hardwork and intellectual skills.

While taking some initiative for omitting workplace discrimination issue, the management should also take some affirmative action as well. For this purpose, different actions like assuming Path-Goal theory and gathering employers for a single purpose might help organization a lot in omitting workplace discrimination issue. Similarly, assuming an authentic leadership style would also help the organizations a lot in maximizing their profit ratio.

Through assuming participative leadership style, this issue of workplace discrimination can be controlled to a large extent. For instance, if the management would get involved with the employers of the organization, the employers would reciprocate in the same way and there will be no personal, cultural or sexual prejudices anymore.

Some other effective steps which the organization can take in order to deal with this situation are as followed:

•There must be proper training sessions every month in order to teach men and women different skills. •There must be human agents in organizations who can update upper management about the contemporary internal situation of the organization. •For the employers who propagate such sort of ethical issue, there must be penalties so that this issue can be handled from its core. •There must be reward for good work either it is done by some women or an individual belong to dissimilar culture so that this thing generate positive feelings among the employers and they will do their best for another achievement.

Hence, through adopting affirmative strategy and non-consequential theory of ethics, organizations can deal with this issue of workplace discrimination with extreme accuracy and through taking above mentioned small steps; it can heighten the performance level of its working crew. 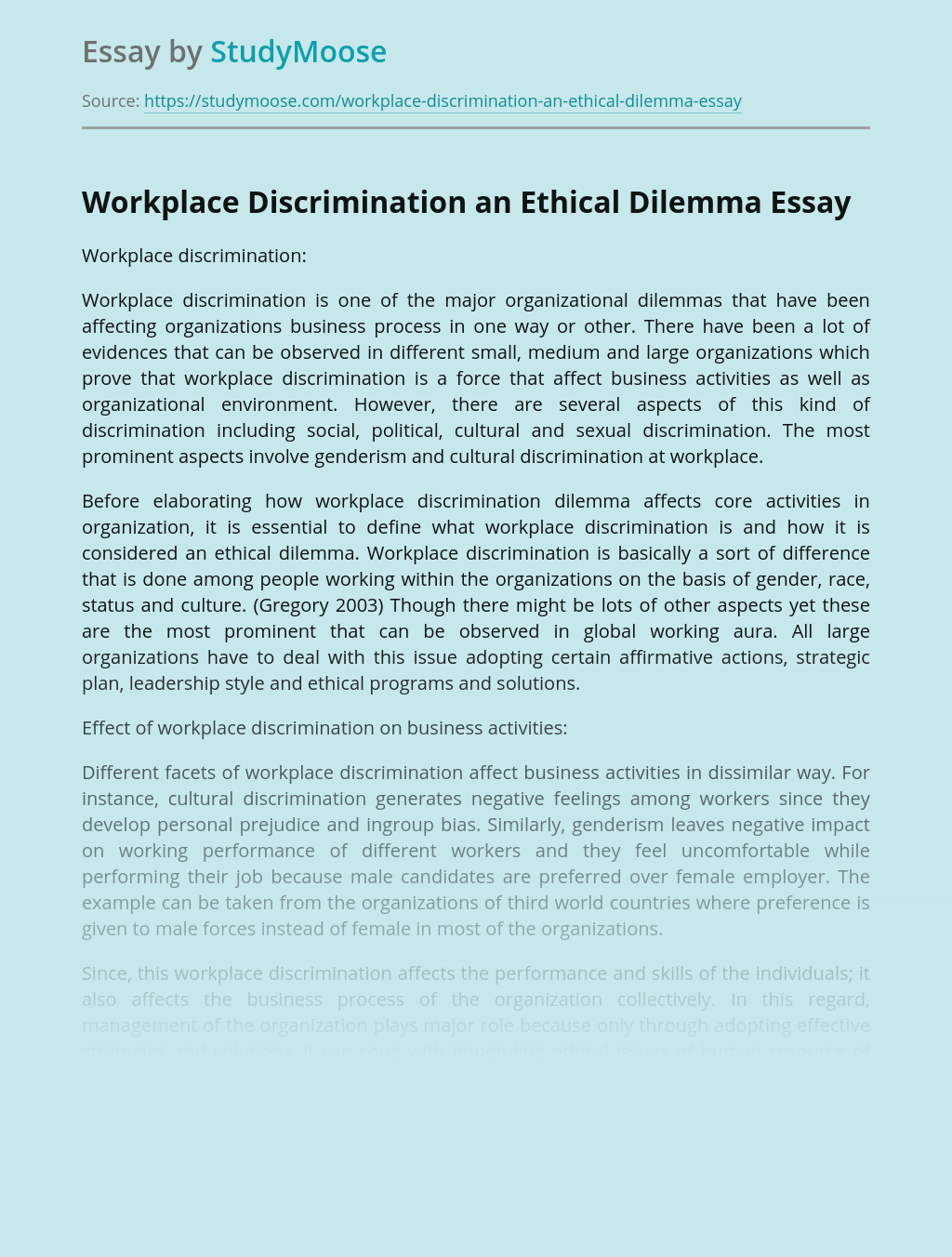