Gentrification, a silent and gradual process that can change a neighborhood completely has displaced a vast amount of people within different areas. What is gentrification exactly? The classic scenario of gentrification is when low working class neighborhoods are transformed into a more attractable and expensive place more suitable for middle class families; a drastic change in standard living. Gentrification has been occurring all throughout the world and has been spreading rapidly, leaving many people without a home.

Gentrification has happened since ancient times; in Britain in the third century large villas were being replaced by small shops.

Don't use plagiarized sources. Get your custom essay on
“ Working Class and Gentrification ”
Get custom paper
NEW! smart matching with writer

Gentry a word derived from genterise an old French word that means “gentle birth. ” From Manhattan’s Lower East Side now to Harlem, many places have and are undergoing gentrification. Gentrification has its positives and its negatives which are beneficial to both sides, the old and the new residents. Do the pros outweigh the cons, are the old lower class residents being purposely moved out of an area in order to make a more prosperous?

According to several articles and perspectives it all depends in which eyes we view gentrification from either the old residents who feel that the cons and greater than the pros or the view of the homeowner and the government whose intentions are to better the area and make living conditions better.

In my opinion gentrification is beneficial in the greater sense that it is helping many people and the neighborhood grow by creating new and better opportunities that were not offered before.

Gentrification in Harlem has transformed a slummed abandoned neighborhood into a tourist attractive Mecca. The heart of Manhattan once was surrounded by large empty lots and vacant building. After World War II drugs, crimes, and poverty increased significantly in Harlem. Harlem was known as an unsafe area at this point. Today it has beautiful brownstone building, lavish condos, life and culture, and the famous 125th street attracting people every day. How did Harlem become the place that it is now? By the early 1990’s Harlem began to experience both a social and economic gentrification.

The process which Harlem is undergoing has been very controversial, some find it helpful and feel that gentrification has better the place which they call home, others dread the idea that its happening and wish that it would go away. “Affluent urban pioneers with $3 lattes invade working-class or decaying neighborhoods, build luxury condos, demand government services, and attract new business[es]. Meanwhile, landlords push or price out the longtime residents who can’t afford the high-rent improvements” (Hsu 1).

Hsu describes the process of gentrification through changes in which she witnessed in the stages of gentrification, starting off with fancy over priced coffee to unaffordable housing which the lower class residing in the area can no longer afford. Some of the major changes that Harlem has undergone are minor ones like fixing abandoned buildings to some major ones like rezoning certain areas and increasing housing prices. In the end the changes that occurred in Harlem whether good or bad beneficial or not all depends on the person and how they were affected by the change that occurred.

A positive influence that gentrification has on an area is that it creates new and better job opportunities. With the new businesses that are being created it creates new jobs for the current residents that were once jobless. Many people uses this as a negative and positive aspect because in order to create the new larger businesses small family owned businesses were torn down. If one looks at the bigger picture the larger business that was created such as the Pathmark in Harlem creates more jobs than a small business did, better prices, fresh products and new venues.

Another positive of gentrification is that the living and housing conditions improve drastically. From vacant abandoned building to beautiful detailed brownstones. Gentrification helps beautify an area as it did with Harlem. In Harlem the vacant buildings and lots were the home or hide out for many drug dealers and users. Throughout the mid and late 1900’s a rise in drug use increased in Harlem. Many began to use heroin, cocaine, and marijuana. Poverty began to increase rapidly due to the continuous use of these drugs; many had to choose between a drug and rent and often chose the drug.

Studies have shown that high rates of drug use usually occur in poor living conditions and low economic areas, such as Harlem was before gentrification (Davis 4). As gentrification entered Harlem the safety also improved. Crime rates decreased dramatically, the streets became safer, and drug use was becoming less noticeable. Where would Harlem have been today if it had not gone through gentrification? Maybe Harlem would not have made it to where it is today, it would not be a tourist and market attraction, and it would have the life/soul it has today.

The biggest negative aspect that many people agreed on is that Gentrification is beneficial for the affluent society as they can procure land at low cost but it adversely affects the lives of the impoverished who cannot afford to pay soaring land rates. The fact that gentrification has the power to come into an area and “remodel” it gives them the right to indirectly control the people of the area; they have the power to move them out by increasing the housing market to prices they cannot afford. In an analysis of the housing policy it brought up the idea that gentrification also creates a gap between colored people and white people.

Jerzyk states in the article that: The American housing market mirrors the myriad economic, social, and racial problems plaguing the nation. From the eighteenth through the mid twentieth Century, government-sanctioned segregation policies in both the public and private sectors created neighborhoods defined by skin color (1). Has gentrification created this gap between races, or is skin not a factor in who remains in an area after gentrification has entered it? In my opinion before skin color was possibly a factor to gentrifying an area; today I feel that it is more of a business rather than a helping.

Gentrification is a business for the simple fact that the intention of improving an area is not to help the people as they say, but to get money. One invests to get back is the motto for corporations when getting involved with buying old home and fixing them. The fact that they buy these building and increase the prices drastically proves that they want to make a profit off their investments. They increase the prices so that the “old residents” cannot afford living in the area for much longer which brings in the “new resident,” the working and upper class who can afford lavish and expensive lifestyles.

Although not everyone is benefiting from, in any situation not everyone will be pleased. Harlem is undergoing gentrification; it improved tremendously and has created new things for both the old and the new residents. Many people are off the streets, even though crime still exists it has decreased rapidly and new programs outside of schools have been developed to help keep young ones off the streets and away from crimes and drugs. Gentrification is spreading and will continue to spread if we want to benefit from it we have to prepare for it, notice when it begins and take the best of it. 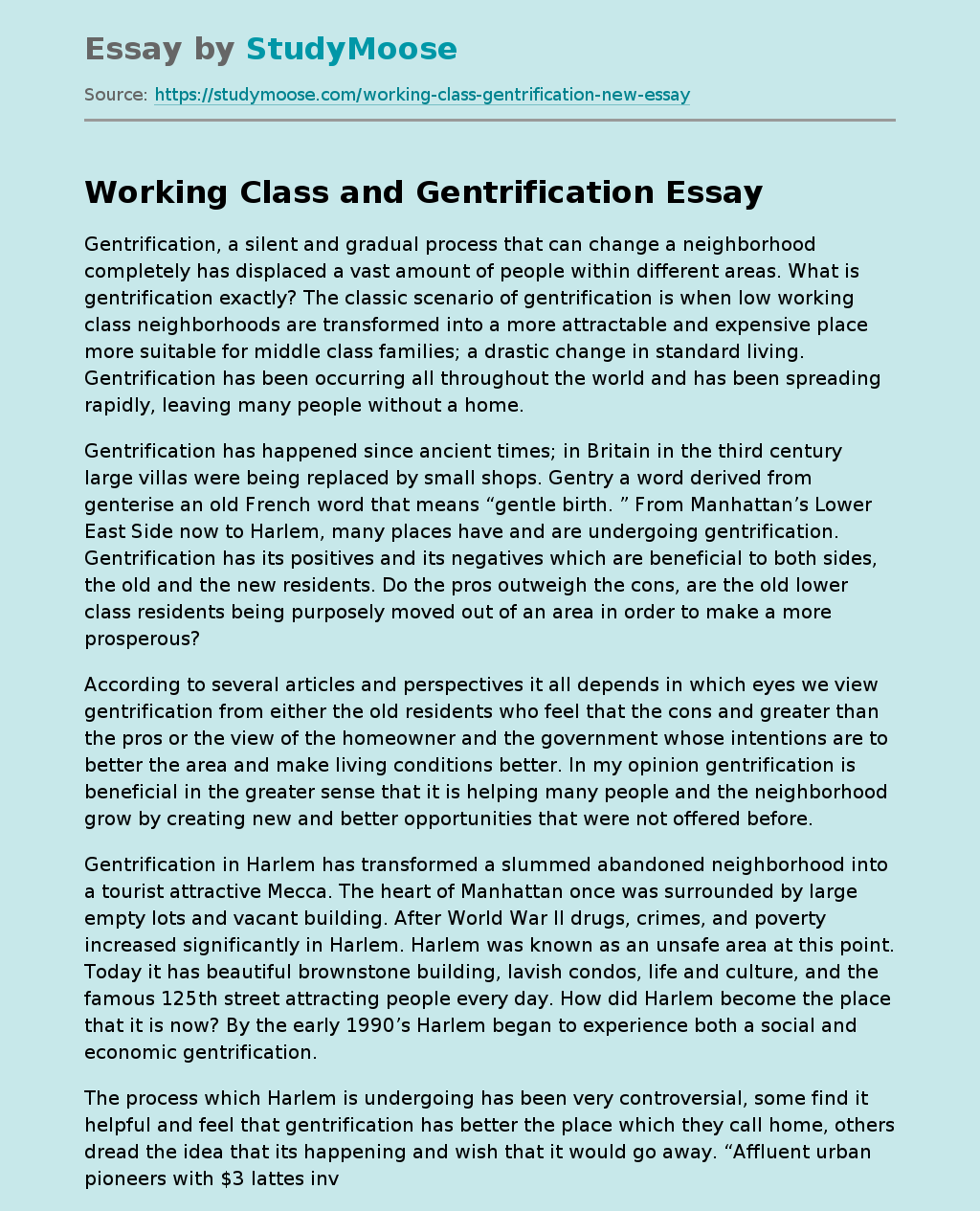