In the essay “Working At Wendy’s” by Joey Franklin, the author makes a case for setting aside one’s pride to provide for your family. Throughout out the essay, Franklin supports this argument by recounting the experiences of his friends and family members who have found themselves in like situations. The author shows that he is a team player when it comes to supporting his wife in her endeavors. According to Franklin, his wife is in her last semester of college, and “he wants to work nights so that he can take care of their son during the day.

Turn in your highest-quality paper
Get a qualified writer to help you with
“ Working At Wendy’s Essay Summary ”
Get high-quality paper
NEW! AI matching with writer

” Franklin, a college student himself, is two semesters away from graduation when he decided to go out for this job. In this essay, he gives the reader a passenger seat view of his internal conflict between looking the part to his community and doing what’s necessary for his family. His initial attitude towards working fast food was one of embarrassment.

According to his essay, he hid his resume and pretended to be studying the menu when a couple came in to the lobby.

It is insinuated that the hiring manager came out while the couple was still there and unashamedly asked him if he was there to inquire about the night shift much to his chagrin. The author is transparent about his own self- consciousness as he encounters various characters. As his job at Wendy’s begins, Franklin is confronted with having to serve his own community. According to the author, because he lives a few blocks away from the restaurant, he recognizes quite a few of the customers.

Many of them are the parents of the members in his Boy Scout troop. He finds himself trying to save face by explaining that his stint at Wendy’s is a temporary one. His fears are further supported when he encounters “a well groomed twentysomething man” in the bathroom.

The man asks him if he likes working the night shift and then proceeds to ask the author if he ever considered college. At this point, Franklin, wanting to rattle off his collegiate achievements, decides to allow whatever demeaning perceptions the man may have of him to prevail. The essay is punctuated with conversations with his co-workers. It’s in these conversations that he is able to introduce the reader to the diversity of the night shift crew. Though the author shows to get along well with most of the staff, he notes his dislike for his co-worker Dave. The author portrays him as pushy and rude. On the other hand, there is Danny, a high school student who takes a liking to Franklin and vice versa. In the essay, Danny approaches Franklin for a romantic suggestion on how to ask his girlfriend, Tonya, to her junior prom. This suits the author well as he is majoring in English Literature. His suggestion to use a Shakespearean sonnet proves to be a win for Danny; and his gesture was rewarded with his first kiss. By the end of his essay, the author realizes that it’s not the job that defines him, but it’s the purpose behind it. 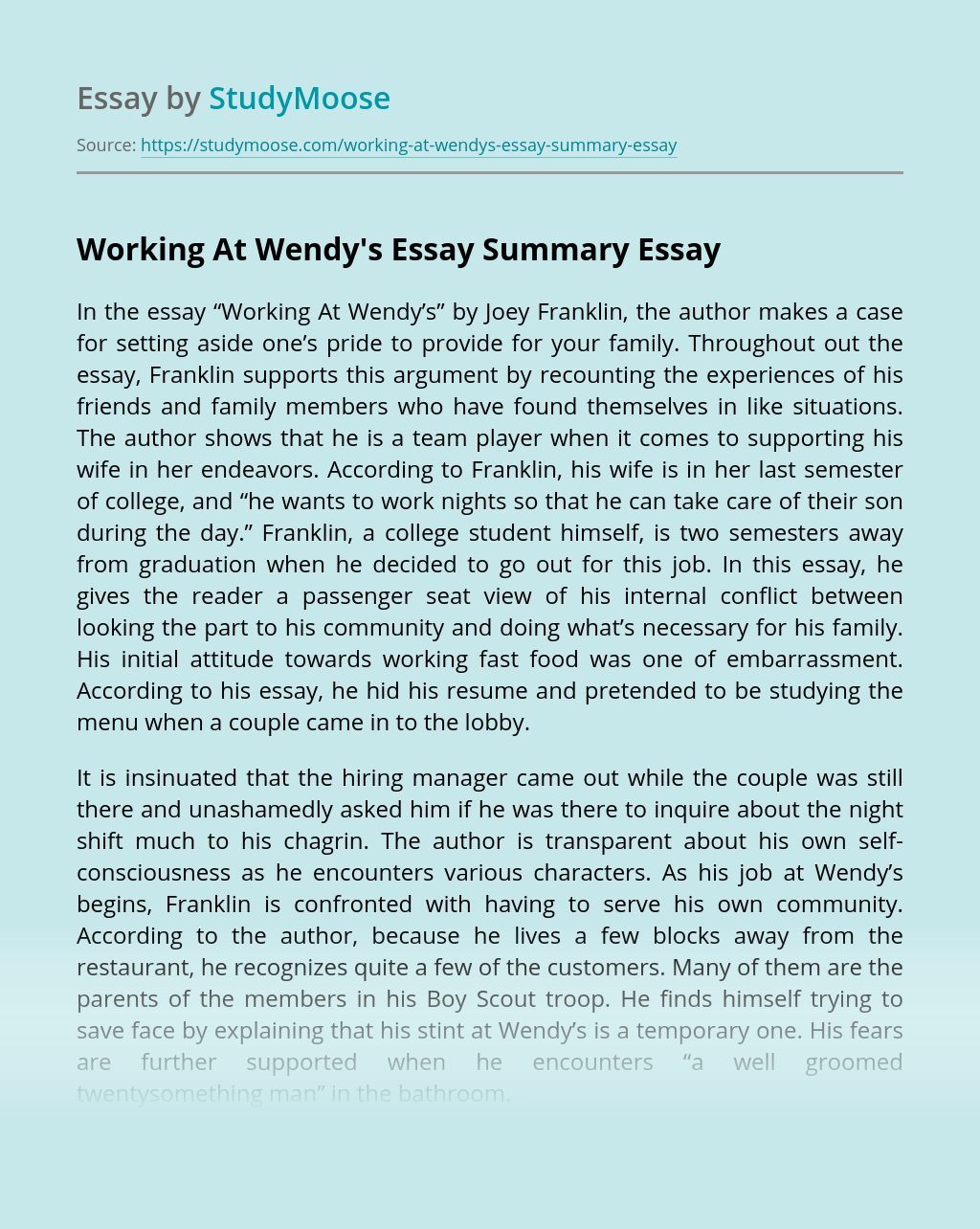 Turn in your highest-quality paper
Get a qualified writer to help you with
“ Working At Wendy’s Essay Summary ”
Get high-quality paper
Helping students since 2015
Stay Safe, Stay Original