Memories can be either good or bad and they often follow you through your entire life. We all have memories which we would rather forget, but you just have to live with the bad memories as well as with the good ones. In Wood Grouse on a High Promontory Overlooking Canada, we meet Gary who is deeply affected by his memories from the Vietnam War. The story is about the two brothers Bud and Gary, and it takes place at the border between the U.

Turn in your highest-quality paper
Get a qualified writer to help you with
“ Wood Grouse on a High Promontory Overlooking Canada ”
Get high-quality paper
NEW! AI matching with writer

S.A. and Canada in an idyllic landscape. We get the idea that it’s summer because they are wearing sunglasses in “the cloudless sunlight (line 18)”. Bud is telling the story while looking back on what happened during their journey. Gary’s younger brother Bud is looking back; narrating the story in which he was fifteen years old. We don’t get any information why Bud is travelling with his brother, but it sounds like he just naturally came along.

Bud is a very natural storyteller, and he doesn’t show that many emotions throughout the story compared to his brother.

When bud hits the wood grouse with a stone so it has to be killed by Gary, Bud doesn’t show a reaction and he doesn’t really know why he did it as described: “ “Jesus,” Gary said. “What did you do that for?” – I had no good answer. I said, “I didn’t think I was going to hit one, Gary” (line 58-60)”. Bud doesn’t seem have any empathy for Gary, he doesn’t quite understand that Gary has been traumatized during the Vietnam war, and Bud hitting the wood grouse with a stone putting it into incredible pain and suffering, making it necessary for Gary to end its misery, would make Gary remember the terrible thing he had seen in Vietnam.

At this point in the story Bud still haven’t shown any emotion at all, and he doesn’t really do that until the very last part of the story “I couldn’t fall asleep that night; I felt ashamed of myself. (line 119-120)”.

By waiting to reveal any feelings Bud might have until the end of the story, the author lets Gary’s feelings come in first row and Bud’s in second. The story makes me believe that Gary has changed a lot after being in Vietnam, and that is why Bud is having a tough time talking to his brother. When Gary kills the wood grouse to end its misery, it unleashes a lot of tragic emotions and memories that Gary had buried deep inside of him for a long time. We don’t get a clear answer on whether or not Gary killed anyone in Vietnam, but just having been so close to death, could have torn him onto the stage which he is on, even if he hadn’t killed anyone. Gary calls the place they are at “Draft-dodger heaven (line 37)”. The two brothers are in the middle of nowhere up in the mountains at the border between the U.S.A. and Canada, and it’s definitely not a coincidence that Gary has lead Bud up there, and it has nothing to do with Bud’s dream about living of the land since he didn’t tell Gary about that.

Gary wants to show Bud that there is a way to avoid getting drafted, that’s also why he calls the place “draft-dodger heaven”. During the Vietnam war every teenager turning 18 were drafted so they could go to war and serve their country. Gary had already done this and his memories from the time he had in Vietnam can’t be forgotten too soon, so Gary shows Bud that he has an opportunity to go to Canada and not go to war. So, Wood Grouse is a story about coming to terms with your bad memories. Gary experienced some very strong things which he most certainly will never forget, which will always be a part of him. He is deeply affected by his past, but through the story he somehow learns to live with it. He learns to appreciate the little things in life, and he learns that you will be all right as long as you’ve got a shoulder to cry on. 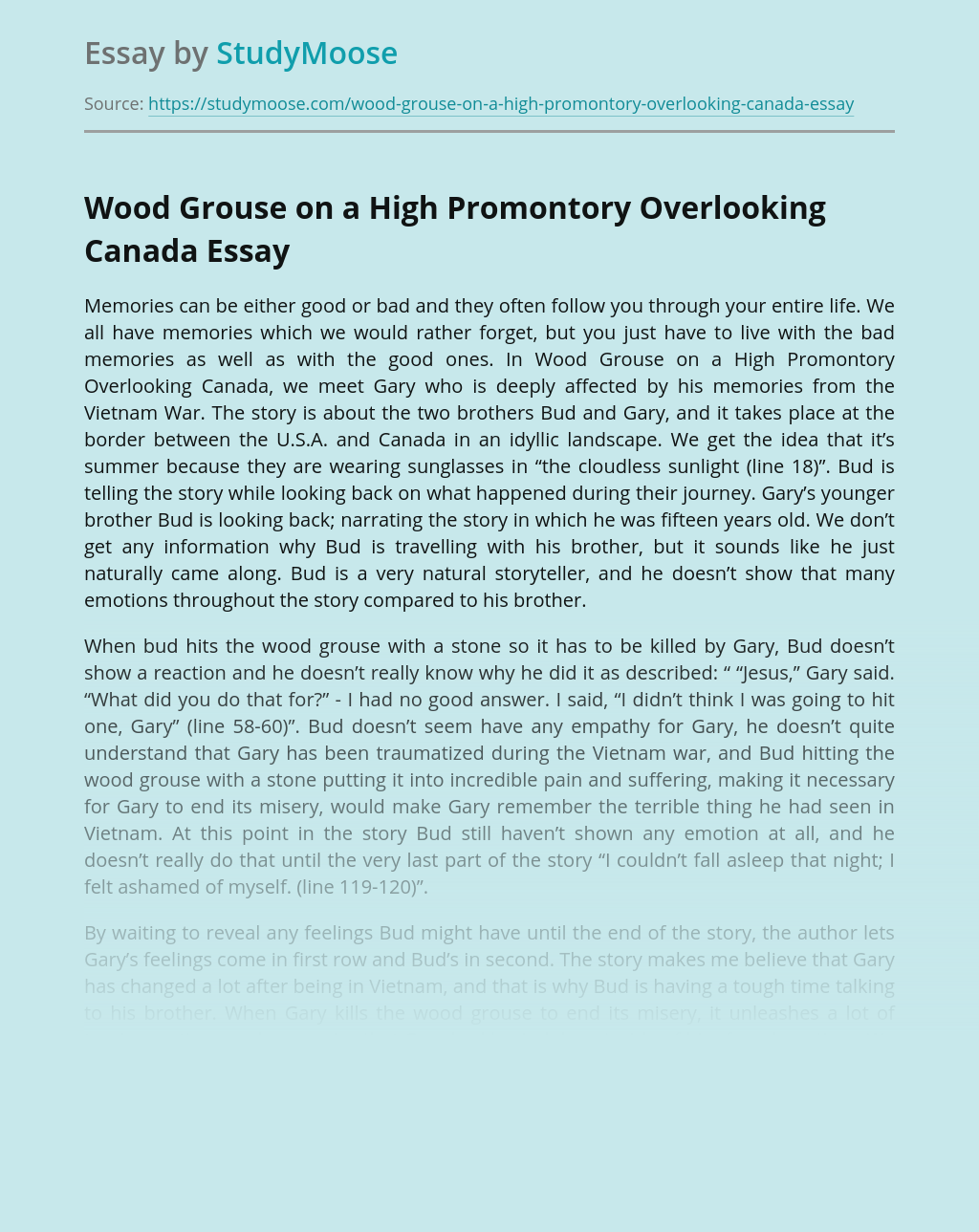 Turn in your highest-quality paper
Get a qualified writer to help you with
“ Wood Grouse on a High Promontory Overlooking Canada ”
Get high-quality paper
Helping students since 2015
Stay Safe, Stay Original