Womens Role In Society In The 1800s History

During the early 1800’s, women were generally trapped in their homes and would only perform domestic chaos and duties. Nature and the society had given them roles as the home keepers, ethical keepers for the home and the entire society, as well as house wives for their families(Wayne, 2007, p.99).. The roles as house wives were to bear children, take care of the young ones as well as submitting to the husbands. Socially, women were considered weaker hence unequal to their men counterparts.

Don't use plagiarized sources. Get your custom essay on
“ Womens Role In Society In The 1800s History ”
Get custom paper
NEW! smart matching with writer

Some people would compare such a condition as slavery. Women had no control of their lives. Everything was entirely controlled by the men in the society. First, their fathers and brothers would control them when they are still young and when they are married, their husbands would finally control them (Bakken & Farrington, 2003, p. 327).

Their key purpose was to look for a husband, give birth and take care of their husbands through out their entire lives. It was a taboo for a woman to remain single; in fact, single women were scorned and pitied by the society.

A woman owned property when she was still in her father’s house but after she got married, property ownership shifted to the husband. The husband had a right to access everything that a woman had, as well as her own body (Wayne, 2007, p.17). For these women, marriage was a lifelong commitment. Women were not supposed to divorce; they were expected to live with their husbands even if it meant to live in miserable marriage.

Divorce was highly punishable and the woman would always fall a victim (Wayne, 2007, p.5). This did not only undermine their physical requirements but also destroyed their opportunities of having any kind of freedom. It subdued their voice of influence thus giving them no hope of attaining social recognition.

Women were not allowed to venture into any other activities apart from taking care of her family. The husband was the sole breadwinner of the family. The only source of finance was the husband hence the only chance for women to be economically protected was for them to marry men who were financially secure. This made them more dependent on men and if the man died, they would be left with no source of income apart from her husband’s savings. The society looked at women as asexual beings; people with neither feelings nor a life of their own (Wayne, 2007, p.17).

However, during the 1800’s, women’s movements became so effective that women began to challenge the social, traditional, economical as well as the political intellectuals that had hindered them for a long time. This was the starting point for the turn about of their roles in the society.

Throughout history, women have had less legal rights and occupation opportunities, hence less representation compared to their male counterparts. Motherhood and wifehood were considered as their most major professions (Burgess & Brown, 2000, p. 137). Towards the end of nineteenth century however, most women had won the rights to vote, and had increased their chances to access education and other professions initially considered for men. Marriage was considered very essential and significant for the sake of the stability of the society. Women were therefore expected to be very obedient and submissive in order to have a happy and stable marriage. During these times, education was a disputable topic and it was the first topic that motivated women into protesting. However, not a single feminist could come up with a means through which education would be equalized between girls and boys. Only the daughters of rich parents would get formal education. Educated girls were however perceived as unattractive sexually, thus getting marriage was a big struggle for them (Bakken & Farrington, 2003, p. 327).

The only subject that girls were taught in school was language; reading and writing. Other courses included wifely responsibilities and activities such as knitting, midwife, cooking and waving among others (Burgess & Brown, 2000, p.118). Women began to form “women rights movements” which helped them in protesting against slavery as well as men dictatorships. These movements led to revolution which eventually led to the constitutional amendment processes which brought about the eradication of slavery. This was a great achievement on the women’s history since they could freely speak out their views.

In the mid 1800’s, women became resistant to the oppression by men and they wanted to become totally independent. As a result, they protested for equal education opportunities and religion activism. It was not that easy; women had to fight both men and fellow women. Men in general overlooked upon feminists and those women who were still dedicated to the traditional way of life, did not want to hear anything concerning women independence. The only place in which women got total support was the church, which also had its own interest. Women became successful in these reform movements and for the first time in history, men became challenged by the female domination (Bakken & Farrington, 2003, p. 167).

Women thus began to perform duties outside their homes. This meant that they would cook, nurse and educate young people for a pay. They also became teachers, nurses and secretaries; which were the only jobs that the society accepted women to pursue (Wayne, 2007, p.78).. Nevertheless, a woman was only supposed to work as long as she was not married, but once married, she was expected to stop working and take up her role as a wife and mother. During this time, being a housewife necessitated a wide range of multifaceted abilities since almost all items were home made (Wayne, 2007, p.77).

However, their employment opportunities expanded during the industrial revolution period. Many women worked in the new industries so as to fill the vacant places. The public school system also expanded thus leading to many more women to be employed as school teachers (Wayne, 2007, p.86). Nursing also became a highly regarded job for women in 1850s following the restructuring in hospitals and the nursing career. The civil war also contributed greatly to the evolution of women roles in the society. It resulted to many women getting jobs in the government and other offices, that were initial held by men, so as to fill in the positions evacuated by men as they went to fight. After the civil war, women continued to work in the government since they had proved to men that they could really work (Wayne, 2007, p.94). Another thing that encouraged women into employment was the discovering of a typewriter. Research found out that women would make better typists than men hence women were all over as typists and sales clerks.

By 1870, women learning prospects had improved drastically. There were additional schools for girls and most colleges could also admit women for advanced courses. By the end of 1880, women had made up approximately one third of the total population of students in the United States (Wayne, 2007, p.85). At the same time, women attained more legal rights with the establishment of more movements and acts. For instance, the married women property act allowed married women authority over their own properties. Her property was hers and not her husband’s (Bakken & Farrington, 2003, p.318). 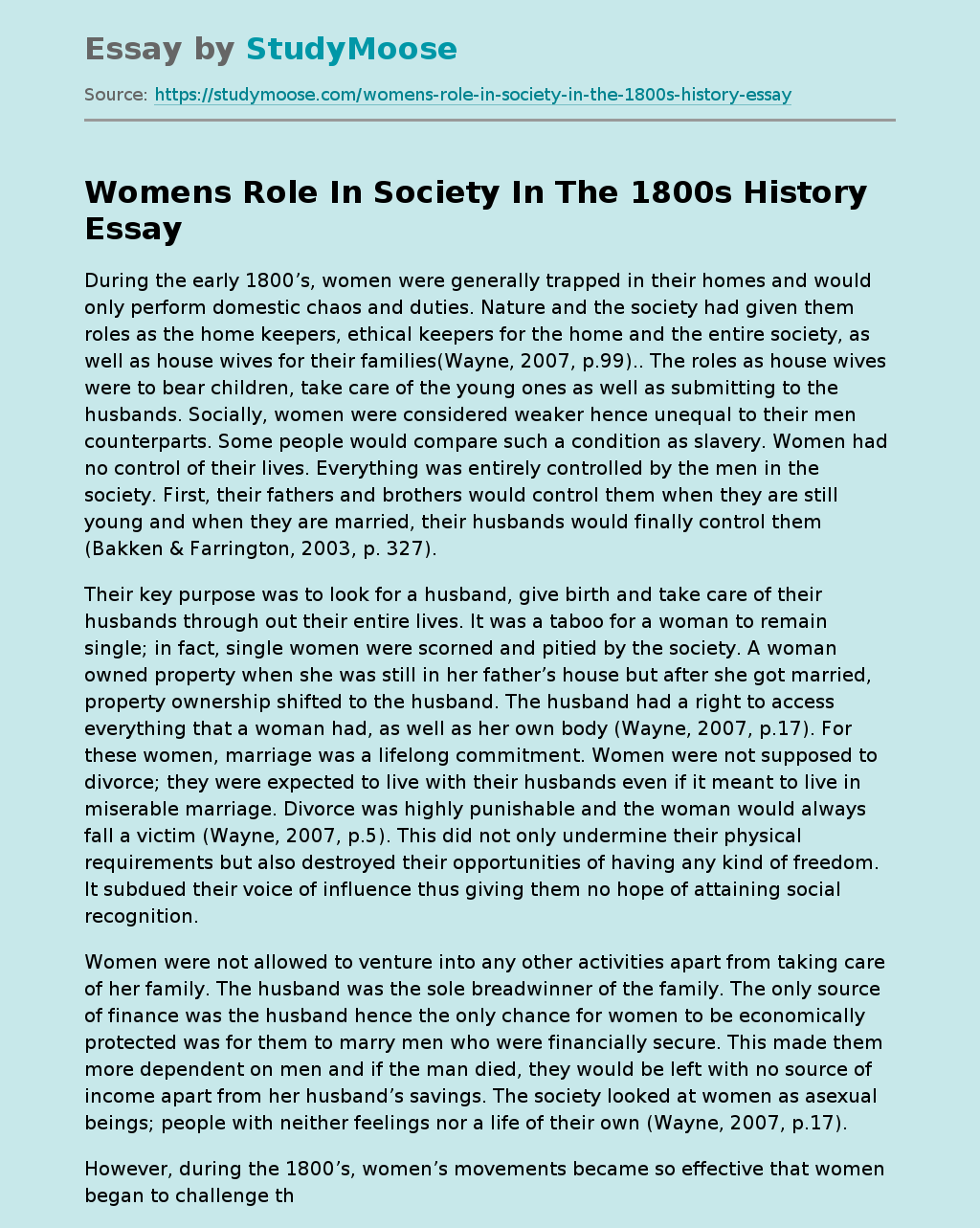