Women’s Role in Heart of Darkness

The two main female characters can be seen as symbols of the contrast between light and darkness. About Kurtz’s mistress it is told that “She was savage and superb, wild-eyed and magnificent; there was something ominous and stately in her deliberate progress. ” (Conrad 125) She embodies the wild, untamed land of Africa. She is dark-skinned, haughty, and unwavering. Her aloofness and savage nature add to the portrayal of her as evil. Kurtz’s intended, who he leaves in Europe, she has “fair hair, this pale visage, this pure brow, seemed surrounded by an ashy halo from which the dark eyes looked out at me.

Don't use plagiarized sources.
Get Your Custom Essay on Women’s Role in Heart of Darkness Just from $13,9/Page

Unlike the African woman, she hangs her head in sorrow. She is the ideal woman, who will uphold the memory of Kurtz and be faithful, not passionate. There is nothing evil about her, only naive good-intentions and unquestioning loyalty. A striking contrast in the story “Heart of Darkness” by Joseph Conrad is the differences between the two women that Kurtz is involved with.

His intended, a white woman who waits faithfully for him in Europe, and his fiery African mistress help to reinforce the themes and ideas in the story.

Kurtz’s mistress and his Intended also help us gain insight into his decline into madness. When Marlow meets him he no longer cares for the principles of society, and is cheating on his fiance with the African woman. The African woman represents how Kurtz has formed an alliance with the natives. Discussion Conrad’s own belief that women are far removed from the reality of men is reinforced through his portrayal of Kurtz’s Intended. She cherishes the thought that Kurtz is a man dedicated to saving the Africans.

She is certain that Kurtz loved her faithfully, never realizing that he has an African lover. At the end of the tale, Kurtz finds her so pathetic he attempts to lie to her about Kurtz’s last words. In her naivety, she seems to be living in a dream world. Despite their differences, Kurtz’s two women lovers in “Heart of Darkness” function as blank pages that Joseph Conrad can use to depict the removal from reality that he sees in women at the turn of the century.

One, the African lover, represents darkness and the raw savageness of Africa, while the other, Kurtz’s intended, portrays trust and naivety of European women. These portrayals add to the themes and ideas from the story. Joseph Conrad portrays women characters simplistically in black and white. The white European women are innocent and ignorant. They are misinformed by the men, and Marlow believes this is for society’s sake. In his society, the women are powerless and misinformed, and society is civilized. In the Congo, the women are strong and have power, yet the society is being oppressed by white men.

In Marlow’s mentality, women should live in their own idealistic worlds and not interfere with men, however, this may stem from his fear of the power that women have. The first women introduced are white European women at the office of the Company. They are knitting black wool, which may symbolize the Natives of the Congo or the Darkness itself. These women unquestionably accept the fate that lies ahead for the men that come in the office, and seem, undisturbed. They are probably disillusioned about the reality of what goes on in the Congo, much like Marlow’s aunt.

She helped Marlow get his job on the steam boat eagerly because she felt it was a he who “had been a couple of years already out there engaged in the noble cause” (Conrad 55) This noble cause was colonizing and civilizing the Blacks in the Congo. She feels that he will be an “Something like an emissary of light, something like a lower sort of apostle. ” (Conrad 59) But she overlooks the fact that the Blacks are being exploited for the financial benefits of ivory. Another display of Marlow’s opinion that women should be ignorant is in the painting that he admires.

It is a painting of a woman that is blindfolded, but carrying a lighted torch. This is an ironic painting in itself, but it goes along with Marlow’s view of women in a civilized society; they are surrounded by the truth, but they are kept blind from it. The reader is then taken into a totally different world for the role of women; the Congo. The native woman who was Kurtz’s mistress is an image of nature, beauty, and power. Kurtz is very powerful, and the mistress was his equal. She is not bound to him, and she can come and go as she pleases.

You could even view her as the stronger of the two, because she retained her blackness when the whites invaded her society, but Kurtz lost his whiteness while in the Congo. The black woman also has the power of lust; she is beautiful and sexy and she is able to draw Kurtz in with this. This is probably what scares Marlow. Much like the story of Adam and Eve, where the man was powerless against the woman’s temptation, Kurtz was tempted by the native woman. Marlow connects the chaos of the Congo to the power of woman, much like he connects the order of society in Europe to the weakness of women.

Conclusion In Heart of Darkness, Marlow clearly believes that the role of women in society is to keep to their duties, without getting involved in the issues of men. They should stay misinformed and ignorant to the evils in this world. This is shown by his treatment towards and depiction of white women throughout the story. Marlow fears a society like the Congo, where the native woman is powerful, that is so chaotic when compared to his orderly European society. By keeping women in an idealistic world of their own, Marlow feels that society will be safe.

Women’s Role in Heart of Darkness. (2016, Dec 24). Retrieved from https://studymoose.com/womens-role-in-heart-of-darkness-essay 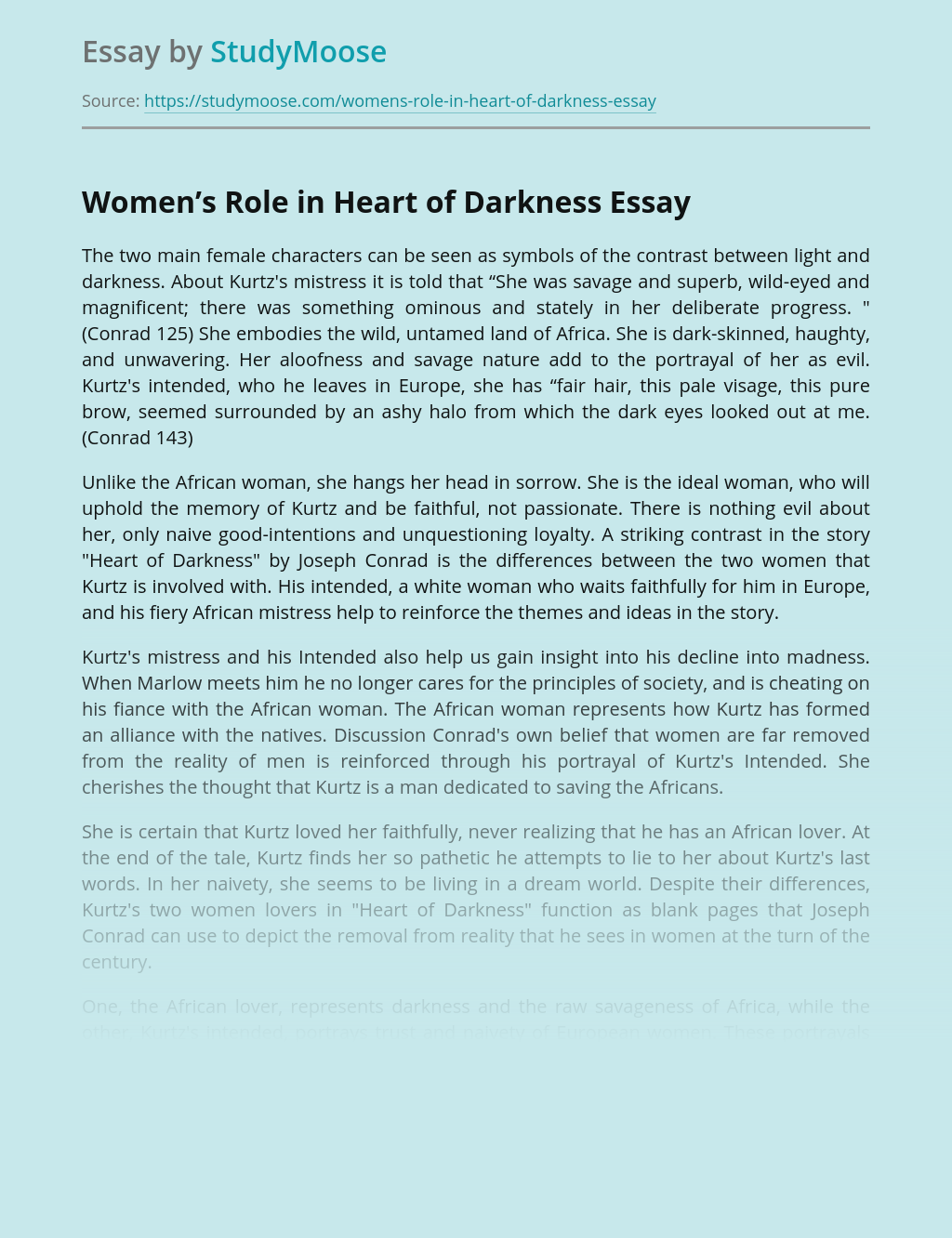 Living in a dynamic earth

Rate this post Evolving from ape-man society to the advanced civilization nowadays, people start to inhabit in artificial concrete jungle and live far away from the given natural environment. With social progression and economic benefits, peoples’ crave for natural resources keeps escalating from time to time. People have a great tendency to consume resources yet...

Rate this post Of the three diagrams, which one best illustrates the idea of compositional unity? B In his painting The Flagellation, Italian artist Piero della Francesca created unity by concentrating on groups of figures in two different ares, _____ and ___. Foreground…background ____ balance is achieved when both sides of a composition look exactly...

Get Essay
Analysis of the Soft-Hearted Sioux

Rate this post The soft- hearted Sioux presents the transformation of a boy from a soft-hearted person to a cold man when he confronts the traditions of his tribe against Christy. The boy left home to a mission school where he learned about Christ and became more and more accustomed to the white man’s culture....

Rate this post “We can easily forgive a child who is afraid of the dark; the real tragedy of life is when men are afraid of the light”, Plato said. Studying knowledge is something philosophers have been doing for as long as philosophy has been around. People always see just a part of things around...

How Innovative or Original Can a Successful Artist Be?

Rate this post Art – How innovative or original can a successful artist be? Art is considered to vary across culture and also through time. Art considered as a masterpiece by this group of people might not even be appreciated by another group of people. Art changes through time and the value of a certain...