Women's Rights in the United States in the 1700s

In the mid to late 1700’s, the women of the United States of America had practically no rights. When they were married, the men represented the family, and the woman could not do anything without consulting the men. Women were expected to be housewives, to raise their children, and thinking of a job in a factory was a dream that was never thought impossible. But, as years passed, women such as Susan B. Anthony, Lucretia Mott, Elizabeth Cady Stanton, Lucy Stone, and Elizabeth Blackwell began to question why they were at home all day raising the children, and why they did not have jobs like the men.

Don't use plagiarized sources. Get your custom essay on
“ Women’s Rights in the United States in the 1700s ”
Get custom paper
NEW! smart matching with writer

This happened between the years of 1776 and 1876, when the lives and status of Northern middle-class woman was changed forever. Women began to leave the house and begin work, and also began movements for equal rights for woman. They made large strides for equality, and really came far from where they were in 1776; however, they still were not close to having equal rights as the men in 1876.

Many women campaigned to improve their lives, increase the wages of working women, and expand employment opportunities for women. This widespread effort became known as the temperance movement, and made a lasting impact on society, specifically the lives of Northern middle-class women.

First, in the mid 1700’s, the traditional American family was still intact. Women were still expected to stay at home and raise the children. Men had all the power in the family, and the women could not do anything without consulting the men first.

Document A shows exactly this. Sir William Blackstone is a commentator, who gave a commentary on the laws of England while America was not a country yet, but colonies of the English. He says that when the man and woman are married, they are considered one person. As Blackstone states, “…the very being or legal existence of the woman is suspended during the marriage…” The document proves that a woman cannot do anything without approaching the husband, nor anything can happen to her without the husband knowing. For example, the document states that if a woman is injured she can bring no action for redress without the husband concurrence, and also a woman cannot be sued without making the husband a defendant.

So basically a woman had absolutely no rights at this time, and men controlled every aspect of their lives. As years pass, women begin to question why they are at home all day, and that shows just seven years later, in the year 1776, which is shown in document B. In this document Abigail Adams wrote to John Adams, asking him why there is such unlimited power in the hands of the men, and absolutely no power in the hands of the women. She says, “Do not put such unlimited power into the hands of the Husbands. Remember all Men would be tyrants if they could.” This is very significant because it shows that there is at least one woman that is beginning to question why men are always in control.

This could have been the turning point for the women’s rights movement because now there is a questioning spirit which always brings change, as did this. It looks as though the women might begin to gain some rights. It is set back when Abigail Adams receives a letter in response to hers by John Adams, mocking her statement, because he says that no government can be strong without men having the control they did. This letter is Document C, which could have crushed the women’s rights movement, but the determination of the women to gain equality is shown in other documents, which is why they did not quit with this setback.

Second, in the late 1700’s and early 1800’s, there are considerable changes in the attitude of women, because their dedication towards their cause is growing and showing that a change must occur through action. Document F shows a picture of an American Family in 1790 showing the husband and wife both working together on something that women were traditionally supposed to do. Slowly, women and men are integrating and even though there are set jobs, women are moving up and changes are occurring. One example of this is shown in document F where both men and women are working together, instead of the woman staying at home. This shows that women are starting to earn the respect of the men. Document E shows the point of view of a woman named Mercy Otis Warren in 1805. She admits that there are “certain appropriate duties to each sex” but still believes that one sex should not have complete power over the other.

She states that although there are evident differences between men and women, every human should be able to have their own degree of freedom and liberty. Once the women began to have jobs, they realized that they were depending too much on what the men were telling them to do, when they knew that could take things into their own hands. This is shown in document L when Catherine E. Beecher makes suggestions on the way the women should teach in 1829. She says that the men believed the women should be teaching the children at home their morals, meaning what is right from wrong, and also their manors, and values. Catherine E. Beecher says that the women can teach this in the school rather than at home. She says now since the women finally can get jobs, they are still taking too many orders from the men. She thinks that they should just do this because it will benefit both the women and the children. Documents F, E, and L all show how the attitude of women changed from the mid to late 1700’s to the early to mid 1800’s.

Third, in the mid to late 1800’s, the women began to gain more rights, and began to spread the field in which they worked. They began to outnumber the men in certain major fields. For example, Document G shows three major nonagricultural occupations that both the men and women participated. The men outnumbered the women in the Factory Work, but the women outnumbered the men in Teaching and Domestic Service. This shows that now the women are starting to find their niche in the workplace. They are starting to find suitable jobs that they can perform. Women are able to outnumber the men in more than one field of work which is a tremendous mental accomplishment for the women. Factory Work is still the men’s field, but at least women know they can compete with the men in at least two areas of work. Even though the women should be proud of this accomplishment in their rights movement, they still do not have equality.

They are being paid almost twenty dollars less than the men between 1837 and 1860 even though there are thousands more women than men. This is because the men still control the higher jobs, and the women do not have the respect of the men so they are not being paid fairly. This was shown in Document N, which was a line chart of female to male teachers and their wages. Also, this underpayment benefited the employers because now they could get cheap labor. This will later produced a growth of factories and lead to laws restricting wages and age for workers. Although, without equal pay, the women will never have perfect equality, which is what they really are searching for. Lastly, in 1855, the women were really hungry for more and more rights, and that really shows in Document P, which is a portion of Lucy Stone’s speech at National Woman’s Rights Convention. She pretty much says how she believes the men are limiting the women to certain areas because they don’t want them having the rights they do.

Also, in 1840, Lucretia Mott and Elizabeth Cady Stanton traveled to London to attend the World Anti-Slavery Convention. Unfortunately, women were barred from participating in the conference and this experience of discrimination inspired them to organize the first women’s rights convention. This convention met in Seneca Falls, New York, in 1848. The Seneca Falls Convention attracted more than 200 women, and this is where the Declaration of Sentiments and Resolutions, was written. This document stated that men and women were created equal and that, like men, women were born with certain natural rights. It was the basis for the movement and inspired many men and women to help the cause of equal rights for women in the 1800’s.

The difference between the women in the 1700’s and the women in the 1800’s was that they just would think differently on what had to do with their social status. Due to the women’s rights movement, every woman’s life changed forever because their status changed from a housewife, to a working person. This also means that once they were married, they did not become non-existent like they would have in the 1700’s. The changing of women’s status is what eventually changed the lives of the women, and everything drastically changed in this time, helped by a few women. These women were Abigail Adams, Catherine E. Beecher, Lucy Stone, and Susan B. Anthony. These women did not gain their rights just because of these four women, but these four women stuck with their beliefs and strongly helped with the movement which ultimately is what changed the social status of women from a housewife to a working person.

In conclusion, looking at documents that were between the years of 1776 and 1876, you notice a significant increase in women’s rights that changed the status and lives of middle class women at the time. The men were used to having all the power, and did not want to give the women any rights, based on some of the documents at the time. Women also went through a huge change between those years because at one time, when they got married, they weren’t even considered people anymore. But, then New York state passed the Married Women’s Property Act in 1848, which allowed for women to acquire and retain assets independently of their husbands. This was the first law that clearly established the idea that a married woman had an independent legal identity, and was a huge milestone. Overall, the status of women between the years 1776 and 1876 dramatically changed due to the women’s rights movements, and what happened in these years is what ultimately changed the status of women in America forever. 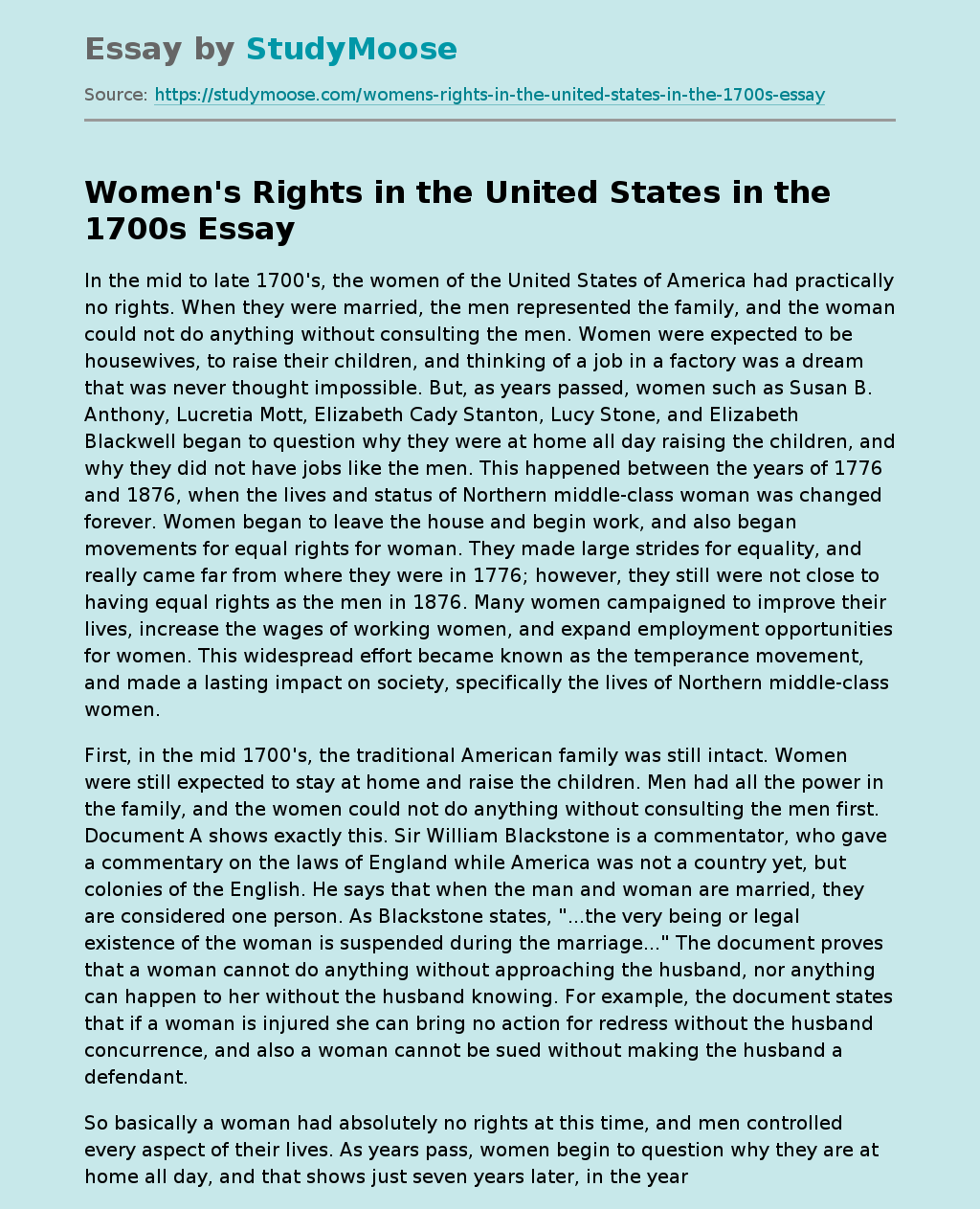