On September 5, 1995, Hillary Clinton- the First Lady of the United States- took front stage at the U.N. Fourth World Conference on Women in Beijing, China to speak on the fleeting struggles women face in every single country. Standing in front of women’s rights activist from over 180 countries, Hillary Clinton’s words were as powerful as her prominent political stand she held. Clinton catalogued the devastating truth on the abuse afflicted onto women, and then challenging the limited discussion of women’s issues in China.

Don't use plagiarized sources. Get your custom essay on
“ Women’s Rights are Human Rights ”
Get custom paper
NEW! smart matching with writer

The New York Times described the importance of her words as “speaking more forcefully on human rights than any American dignitary has on Chinese soil.” (Times). Clinton’s grand goal was quite simple: Helping women around the world have a voice. “The great challenge of this conference is to give voice to women everywhere whose experiences go unnoticed, whose words go unheard. Women comprise more than half the world’s population, 70% of the world’s poor, and two-thirds of those who are not taught to read and write.

We are the primary caretakers for most of the world’s children and elderly. Yet much of the work we do is not valued — not by economists, not by historians, not by popular culture, not by government leaders.”

Clinton’s speech was a mix persuasive identification and advocacy that used symbols, goals, and passionate stories to a group of supporters. As the First Lady continued her speech and read her list of the cruel abuse committed against women and girls, the audience had a dramatic silence.

Her graphic and violent descriptions of the sheer abuse needed no embellishment. “It is a violation of human rights when babies are denied food, or drowned, or suffocated, or their spines broken, simply because they are born girls […] It is a violation of human rights when individual women are raped in their own communities and when thousands of women are subjected to rape as a tactic or prize of war […] It is a violation of human rights when women are denied the right to plan their own families, and that includes being forced to have abortions or being sterilized against their will.” The direct reference “female infanticide” that was rumored to be taking place in China only emphasized the critical points of her speech (Lifeline). “China has been widely criticized for forcing women to be sterilized or have abortions as part of its policy of one child per family, and there are wide reports of female infanticide by parents who want a son.” (Times).

She focused on the past, but also on what goals can be accomplished for the future. “As long as discrimination and inequities remain so commonplace everywhere in the world, as long as girls and women are valued less, fed less, fed last, overworked, underpaid, not schooled, subjected to violence in and outside their homes — the potential of the human family to create a peaceful, prosperous world will not be realized.” It was here that her famous quote “women’s rights are human rights” became a symbol for the women’s rights movement. Clinton’s speech was so impacting because of its organized motivated sequence. For the introduction she merges strategies together to form one groundbreaking beginning. The introduction captivated the audience’s attention, and creates a relationship between her and the audience She begins with a somewhat suspenseful, current event, and then gradually makes her way to a startling fact. “It is also a coming together, much the way women come together every day in every country […] I have met women in South Africa who helped lead the struggle to end apartheid and are now helping to build a new democracy […] No one. No one should be forced to remain silent for fear of religious or political persecution, arrest, abuse, or torture. Tragically, women are most often the ones whose human rights are violated. Even now, in the late 20th century, the rape of women continues to be used as an instrument of armed conflict.”

The need, satisfaction, and visualization can arguably be summarized in the previously cited quote: “As long as discrimination and inequities remain so commonplace everywhere in the world, as long as girls and women are valued less, fed less, fed last, overworked, underpaid, not schooled, subjected to violence in and outside their homes — the potential of the human family to create a peaceful, prosperous world will not be realized.” From this quote you can identify the needs, the goal, and visual what the world could look like for all humans. She concludes the speech strongly and with hope. It positively interconnections the audience with the speaker again providing a summary with a call to action: “Let this conference be our and the world’s call to action. Let us heed that call so we can create a world in which every woman is treated with respect and dignity-“

Clinton assumes a tone that is serious, personal, and formal to rightfully match the seriousness of the issue. She incorporates repetition in her speech in the early on in the speech by repeating the words “we come together” and then later with “I have met” and “it is a violation.” Actual as well examples are given throughout the most intense part of her speech, as she talks about the infanticide and female castration. “It is a violation of human rights when babies are denied food […] simply because they are born girls […] brutalized by the painful and degrading practice of genital mutilation.” Another popular use of rhetoric style is her usage of words to appeal to the audience’s emotions. She does this by dramatically announcing the abuse women suffer, making the audience feel pity, but also strive to fix it. Furthermore, Clinton uses parallelism to help the audiences further understand that there was no difference between women’s rights and human right: “Let us not forget that among those rights are the right to speak freely — and the right to be heard.” Uses of metaphor are seen as Clinton says, “It is time to break our silence” referring to the forced silence society places on women.

The First Lady’s use of pathos, ethos, and logos created a powerful, persuasive argument that connected her audience and relating through personal experience and historical events. The use of Pathos, or emotional appeal, was used to engage the audience’s emotions. Pathos was important in this speech because it hooked the reader into the subject of human rights. It can be seen entirely throughout the speech, as it is the most prominent rhetoric technique Clinton uses in her speech. From beginning to end, she forms a relationship with all the women, identifying with them when she states, “We come together in fields and factories […] in living rooms and board rooms. “ This then continues as she reads her list of the shocking situations females were forced into around the world. “It is a violation of human rights when babies are denied food, or drowned, or suffocated, or their spines broken, simply because they are born girls […] It is a violation of human rights when women are denied the right to plan their own families, and that includes being forced into having abortions or being sterilized against their own will.” The words suffocated, broken, forced are used to appeal to the sadness of the listeners and instilling sympathy into hearts of the audience. Though the uses of other rhetoric devices are presented, pathos was the key to the speech and the strive for change.

Clinton’s speech would best fit under the didactic poetic category, as she looks to teach about the issue of women’s rights. The Firs Lady’s use of pathos supports the characteristics of the didactic category, as it teaches through use of narrative, emotion, and reason. These characteristics can be seen when she states “It is a violation of human rights […]” Clinton not only taught her the audience and beyond to stand up for women’s rights, it worked to strive towards equal rights for everyone. 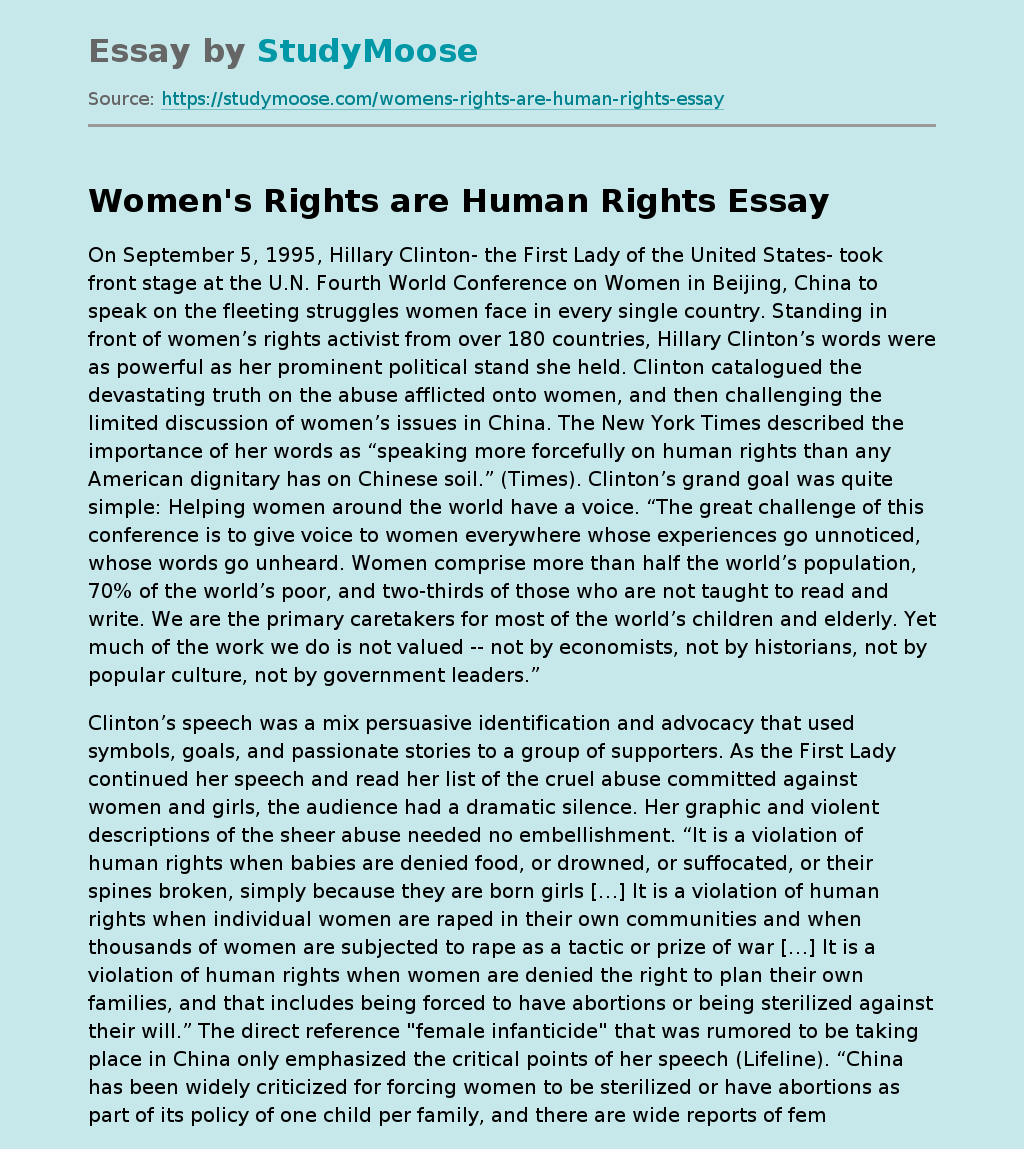