Women have been “pushing” for equal rights, for a countless amount of time. Even before the United States “broke-free” of Great Britain, women have been trying to “gain” the equivalent rights granted to men. This essay focuses upon the women’s advancement for equal rights in the United States starting from the 1848 Seneca Falls Convention, thru the 1970s.The Seneca Falls Convention (July 19-20, 1848) is known as the first Women’s Rights Convention to have ever taken place. This convention was organized by Women’s Rights Activists (as well as Antislavery activists) Elizabeth Cady Stanton, and Lucretia Mott.

Don't use plagiarized sources. Get your custom essay on
“ Women’s Movement 1848-1970’s ”
Get custom paper
NEW! smart matching with writer

According to Stanton, the ultimate goal of this convention was to discuss the social, civil, and religious condition and right[s] of woman.

Neither Mott nor Stanton expected the ‘rally’ to have many visitors, however they were completely wrong. Their convention surprisingly had over 300 supporters. This proved that it was a highly valued topic amongst women in the United States. The Seneca Falls Convention marked the beginning of women organizing to ‘fight’ for their own rights / personal liberty.

Two (2) years after the convention in 1850 the second women’s movement convention was held in Salem, Ohio, and 1850 was also the year for the first national women’s right convention which was held in Worcester, Massachusetts.

Similar conventions regarding the women’s movement were held annually up to the Civil War Era. During the Civil War, many women’s rights conventions and activists put aside their movement to assist in the war effort. Many women took over the male’s role in society, while they were off fighting in the Civil War.

After the war, while the United States was undergoing a period of reformation, Women begin to start organizing conventions, as they did before the war, and in 1867, Susan B. Anthony formed the Equal Rights Association, which worked for universal suffrage. This marks the time period when women began to push for women’s suffrage-the right to vote.

Shortly after the establishment of the Equal Rights Association, the fourteenth amendment was ratified, and the fifteenth amendment passed Congress, giving the right to vote to black men. Women petitioned to be included but are ultimately turned down. The New England Woman Suffrage Association was formed (1868). In 1869, Women’s Rights activist Elizabeth Cady Stanton forms, and leads the National Woman Suffrage Association. Women finally begin to succeed with their suffrage movement when Wyoming Territory grants women’s suffrage, and allows women to hold elected positions.

As time continued, it became increasingly harder for women to voice their concerns, mainly because males began to fight back. An example of this is the National Anti-Suffrage Association formed in 1871, or the multiple arrests, and imprisonment of women’s rights activists. Despite these hard times, women began to gradually move forward with their protests. Several laws and governmental programs assisted the women’s movement, and many controversial federal policies were either ratified, or became a decision on a local scale. The major component women’s movement, the suffrage movement came to an end August 18, 1920 with the passage of the 19th amendment which granted suffrage to women.

Women strongly pushed for more equivalent rights, until the 1970s when legally declared equal, when all the U.S. amendments were finally to apply to all citizens, which included women. In conclusion, the woman’s movement was a slow and painful, but greatly appreciated movement which clearly showed off what freedom allows us to do. Gradually through time, as outlined in this essay, women were able to freely organize, gather, and protest / push for their voices to be heard. In doing so, Activists such as Elizabeth Cady Stanton, and Susan B. Anthony fixed some major flaws with the ‘law of the land’, and because of them, the praise ‘All men and women are created equal’, has moved from being fiction, to becoming and remaining fact. 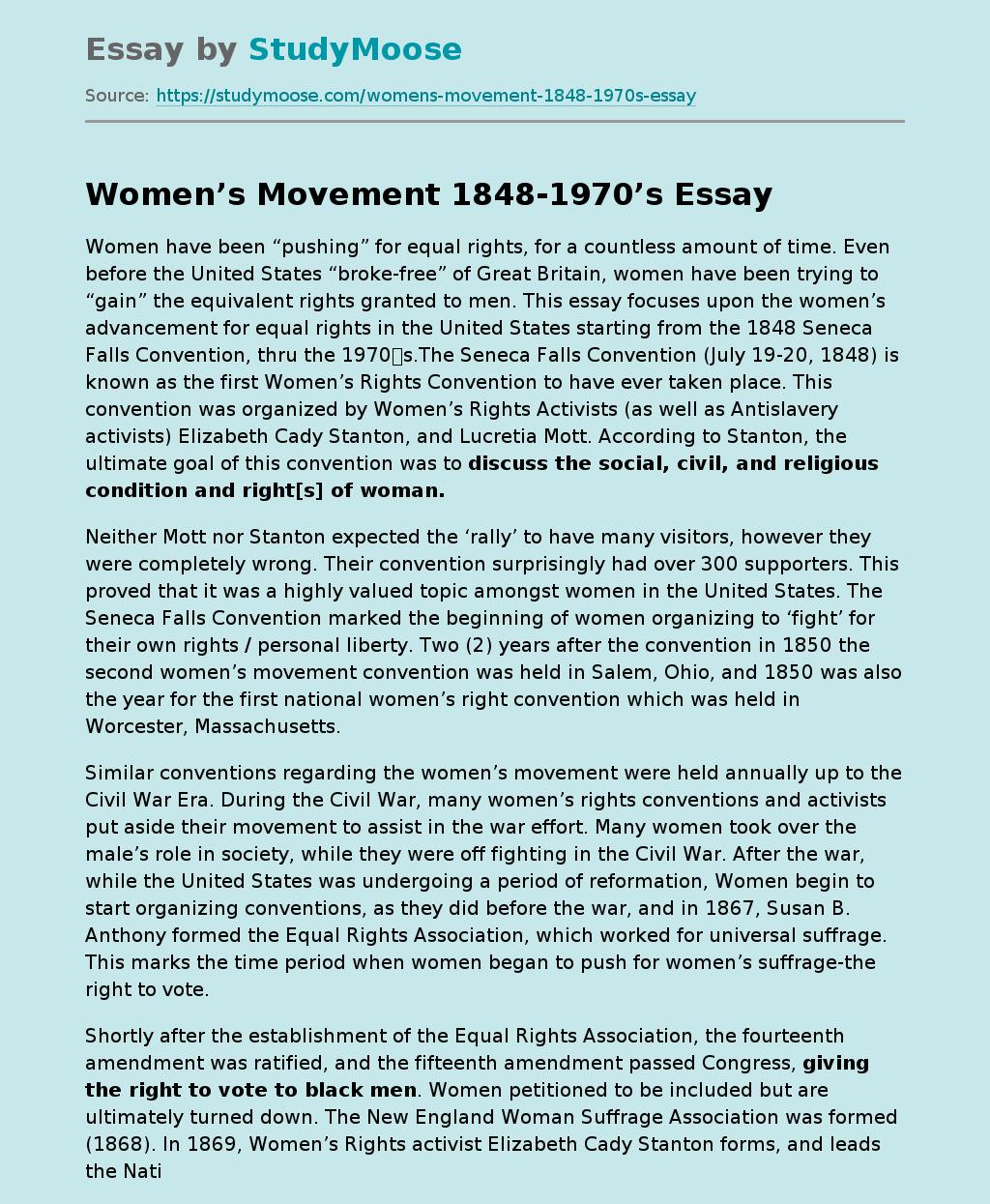