Women problems in The Great Gatsby

In F. Scott Fitzgerald’s novel The Great Gatsby, he reveals how women were the problem through the story. He shows that the women in the book are disobedient through their weakness in their morals, choosing money over love, and their dependence on men. The novel The Great Gatsby is a sad story about a man named Jay Gatsby and his true love, Daisy Buchanan, who is a married women. The story is told by one of Daisy’s distant cousins named Nick Carraway.

Don't use plagiarized sources. Get your custom essay on
“ Women problems in The Great Gatsby ”
Get custom paper
NEW! smart matching with writer

Daisy, a capricious women, isn’t the only unpleasant female in the novel.

The three main women in the book, including Tom’s mistress, myrtle, and Daisy’s friend Jordan, portray poor examples of women. Meanwhile, Tom Buchanan, the husband of Daisy, is the only hated male in the novel. Although Fitzgerald was an amazing writer, he didn’t do so well showing a good light on the females in the The Great Gatsby. The characterizations of Jordan, Daisy, and Myrtle as distasteful humans draws them as problematic in the novel.

Myrtle, introduced as toms immoral mistress, is strongly dependent on men which shows the type of women in Fitzgerald’s writing. Myrtles immorality comes to light in the readers first glimpse of her, as she describes the unhappy marriage between her and her husband. She admits this and says,

“I knew right away I made a mistake. He borrowed somebody’s best suit to get married in, and never even told me about it, and the man came after it one day when he was out.

I gave it to him and then I lay down and cried to beat the band all afternoon” (chapter 2, 35).

The way myrtle reacted to the situation shows her as an emotional women who gets angered and saddened over the silliest things. This also proves that Fitzgerald presumes women to have few cares other than material possessions like Myrtle crying because her new husband is poor. Love should be the only thing she needs to focus on since they just got married, not the financial situations of her husband. Proceeding into the novel, myrtle is depicted into a negative light again. She is controlled and locked up into a room by her husband. George Wilson, who is forcing myrtle to move west with him, and wants to get her away from Tom Buchanan grasp.

Myrtle escapes Wilson, and the place she’s trapped, to only enjoy seconds of freedom before getting hit by an oncoming car and dying. Fitzgerald implies that myrtle should have followed Wilson’s commands and to avoid her unfortunate death. Her ending could ultimately teach women to listen to their husbands. The instantaneous death of myrtle shows that women can’t survive by themselves and without the aid of men for more than a few moments. Myrtles different acts helps the reader to see the negative personalities or characterizations carried through the novel.

Jordan baker, a women with a successful career and the potential to determine her future, is supposed to be one of the strongest women of her day, but Fitzgerald turns her into a self-centered brat. While driving with nick, he calls her a rotten driver, but she says, “they’ll keep out of my way, it takes two to make an accident”. Her words indicate that she doesn’t think how her action might affect the people around her. Fitzgerald also shows that women aren’t just self-centered, but potentially a danger to the society with Jordan’s bad driving as proof.

During Jordan and Nick’s last meeting near the end of the novel, Jordan declares she’s gonna marry another man. At first nick thinks she’s lying, but the action remains hateful on both sides. If Jordan is really going to marry another man, she could possibly do it do spite nick. However if Jordan was lying about being engaged to another man, she’d come off as attention seeking and pathetic, because she wants nick to fight for her. In this passage, Fitzgerald clearly engineered Jordan to look like the villain from both sides. Although Jordan has the potential to be a great model for women because she has the freedom to make her own decisions and is able to support herself, she still depicted as a woman who makes terrible decisions.

Daisy Buchanan, the worst portrayed woman in the book shows both traits from Myrtle and Jordan. She has the money over love concern from Myrtle, and the Self-centeredness from Jordan. Daisy’s concern of of money is really shown when she’s deciding between Tom and Gatsby. Early in Daisy’s life, she left Gatsby to be with a more stable income of her now husband, Tom Buchanan. Although, later on daisy sees Gatsby’s wealth through his big party’s at his mansion, and decides that Gatsby is the one she’s loved all along. In this writing, Fitzgerald is implying that women need money more than love. Concurrently, he displays the fickleness of the women in the novel, especially when daisy goes back to Tom after Gatsby takes liability of Myrtle Wilson’s death, which saved daisy but took his own life. By taking responsibility of Myrtle’s death, George Wilson eliminates Gatsby, believing him to have killed Myrtle.

After Gatsby’s death, Daisy isn’t even considerate to show up to the funeral or honor his life in any type of way. Daisy also doesn’t send any flowers or thanks to Gatsby for saving her life as nick states saying, “daisy hadn’t sent a message or a flower”. Daisy is so self-centered that she fails to see that if not for her, Gatsby would still be alive.

Through the novel, Fitzgerald shows that the women in the novel are self-centered, problematic, money hungry, and have no morals. All these things cause the downfall of Jay Gatsby, who only wanted his true love Daisy Buchanan, which sadly ended up having him die.

Women problems in The Great Gatsby. (2019, Nov 26). Retrieved from http://studymoose.com/women-problems-in-the-great-gatsby-essay 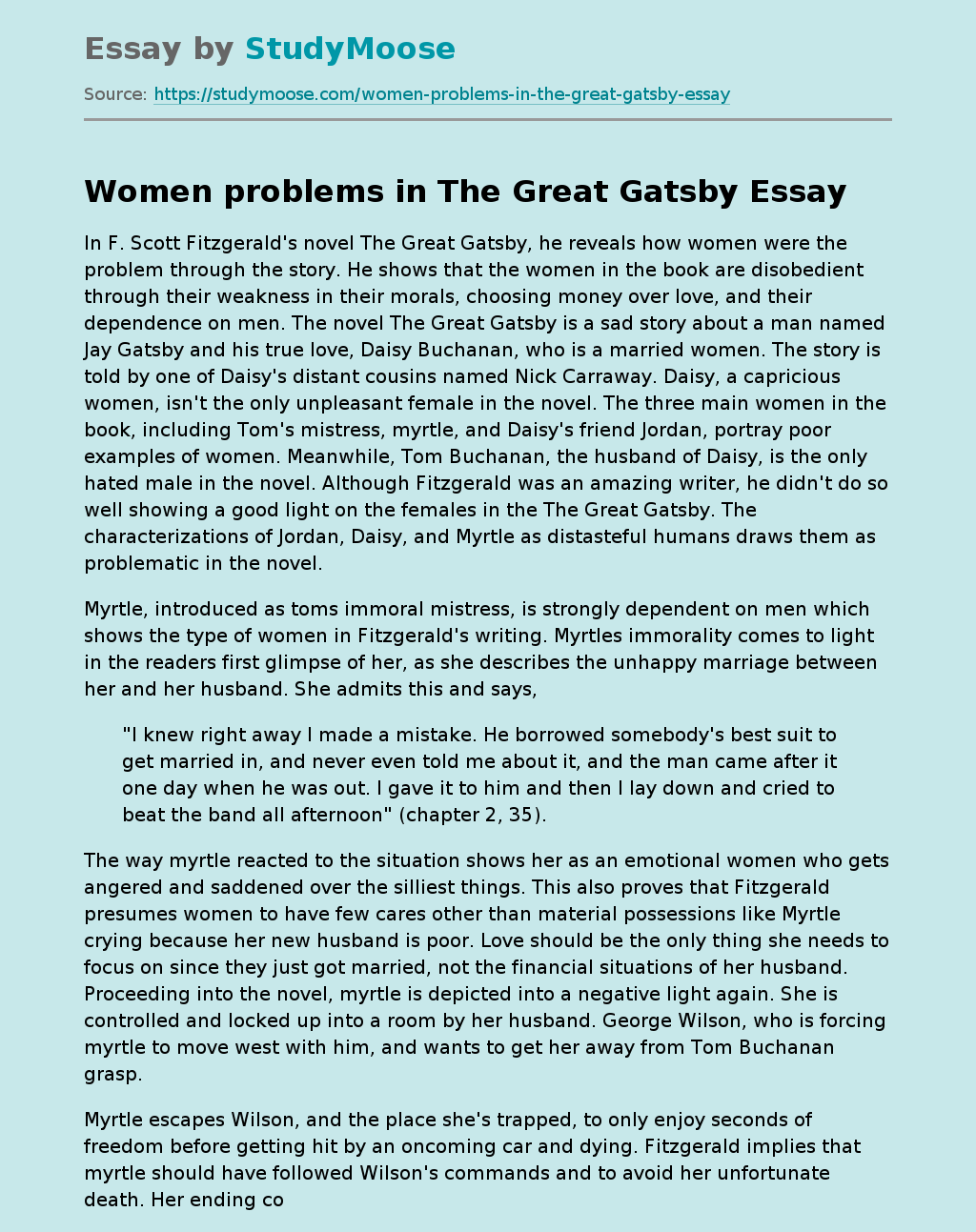